More than 230 people have died this week in air raids on a rebel-held enclave in Eastern Ghouta near Damascus. During a call with Putin, the French president expressed concern at the use of chlorine gas on civilians. 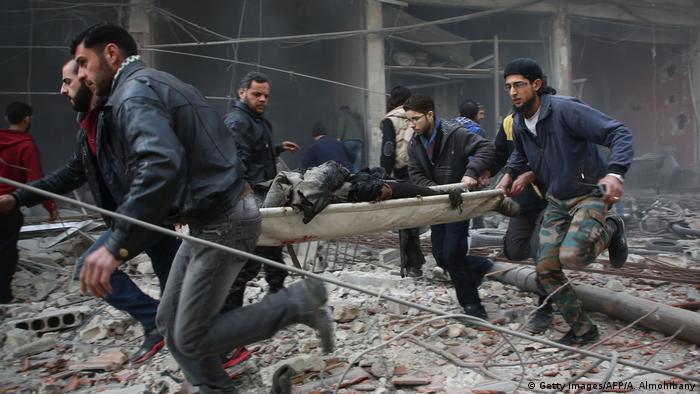 French President Emmanuel Macron on Friday called on his Russian counterpart, Vladimir Putin, to help ease a dire humanitarian crisis in two rebel-held areas of Eastern Ghouta and Idlib in the northwest of Syria near the Turkish border.

The two areas have witnessed intense bombardment by Syrian forces this week resulting in hundreds of deaths. The escalating level of violence has prompted the United Nations to call for a ceasefire for at least one month to allow for aid deliveries and evacuations of the wounded.

Macron urged Putin to "do everything" to ensure Syrian President Bashar al-Assad's army stops "intolerable degradation of the humanitarian situation" in the two besieged rebel areas, the Elysee Palace said in a statement.

Putin is a close Assad ally and is seen as the foreign leader with the most influence over him. 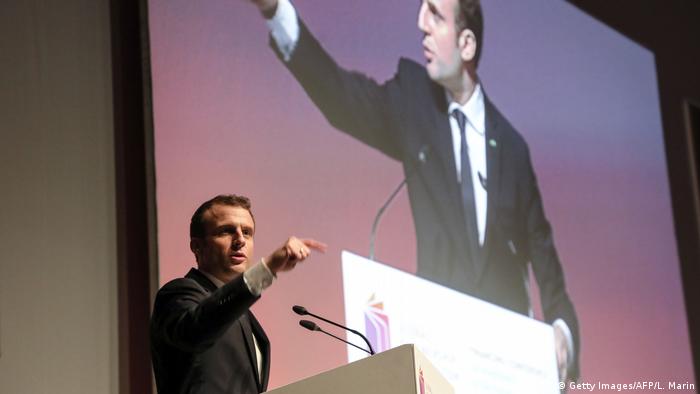 The Kremlin, in its statement after the call, said the two leaders discussed cooperating more closely to resolve the nearly eight-year-old conflict. It did not elaborate on the content of the call.

Macron expressed his concerns at signs that that chlorine bombs may have been used multiple times against Syrian civilians in recent weeks.

Macron said France is determined to hold anyone who uses chemical weapons to account for possible war crimes.

A UN-mandated investigation team is probing "multiple" allegations of recent chemical weapons use in Eastern Ghouta and Idlib province.

Airstrikes continued to pound Eastern Ghouta for the fifth straight day on Friday, taking the death toll to over 230, many of them children.

"The people here have collapsed; people are seen talking to themselves in the streets. They don't know where to go," said Siraj Mahmoud, a spokesman with the Civil Defence rescue service in the rebel pocket, whose population is estimated at 350,000. "We are living a catastrophe."

The Save the Children charity said children in the area were being "starved, bombed and trapped." It said 45 schools in the enclave had been attacked since the start of the year, with 11 completely destroyed.

The Syrian regime has repeatedly denied targeting civilians and says it targets only militants.

The US-led coalition fighting the "Islamic State" has killed 100 people in an attack, unusually targeting fighters loyal to Bashar al-Assad. It said it was retaliating after the fighters attacked its Syrian allies. (08.02.2018)

Several civilians were being treated for "suffocation" after airstrikes in rebel-held areas in northern Syria. The Syrian government denied US accusations last week it had used chemical weapons on opposition forces. (05.02.2018)

Syrians start from scratch in Raqqa

Large parts of Raqqa are in utter ruin as a result of the battle between "Islamic State" forces and coalition troops. The area was liberated in October, but only now are residents cautiously returning to the city. (03.02.2018)