The conference saw the Russian foreign minister being heckled and the Syrian opposition refusing to leave the airport. But the event ended with a plan to draft a new constitution as part of efforts to end the Syrian war. 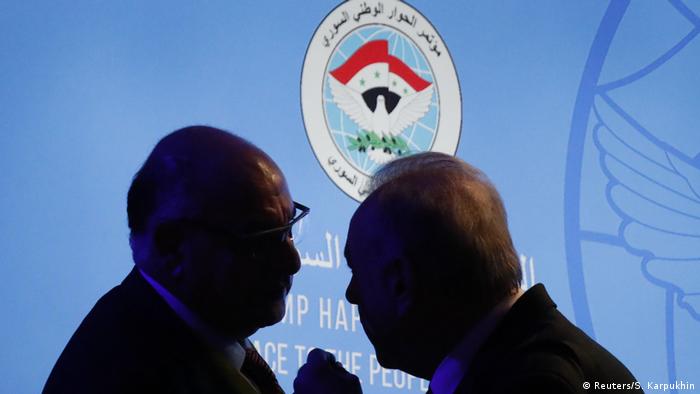 The main Syrian opposition body boycotted the peace conference in the Black Sea resort of Sochi in Russia on Tuesday, dealing a major blow to Moscow-backed efforts to launch negotiations to speed up a political settlement for Syria.

A group of opposition delegates, including members of the armed opposition who had flown in from Turkey, decided to stay put at Sochi airport to protest the Syrian government flags and emblems that were on display at the airport.

"We were surprised that none of the promises that were given had been kept, the ferocious bombing of civilians has not stopped, nor have the flags and banners of the regime (been) removed," Ahmed Tomah, the head of the delegation, said in a video recorded at the airport.

The complications emanating from the boycott forced the organizers to delay the start of the one-day event, aimed at launching negotiations on drafting a new constitution for Syria.

"Some problems have arisen with a group of the armed opposition that has come from Turkey which has made its participation dependent on additional demands," Russian Foreign Ministry spokesman Artyom Kozhin wrote on social media.

Turkey was eventually asked to represent the boycotting groups as a compromise. Turkey, a supporter of the Syrian opposition, is one of the three members of the Astana process, along with Russia and Iran, which back Syrian President Bashar Assad.

At the end of the conference, the participants agreed to set up a 150-member committee to discuss changes to the existing Syrian constitution.

They even listed candidates from various Syrian factions whom they would like to see on the constitutional drafting committee, which would be based in Geneva. Russian Foreign Minister Sergey Lavrov said the groups absent from Sochi would also be invited to name representatives.

The conference endorsed a "democratic" path for Syria through elections and called for respect for the country's territorial integrity.

"Authority should be returned to the people, and they can decide what they want," said Qadri Jamil, an opposition figure based in Moscow who supports the talks.

A final agreement on criteria for selecting members, the constitutional committee's powers and its rules of procedure would be reached in Geneva under the UN's aegis.

The peace conference started after a two-hour delay, with Lavrov reading out a statement from Russian President Vladimir Putin saying the conditions were ripe for Syria to turn "a tragic page" in its history.

But, as he read out the statement, some delegates started shouting slogans against Moscow for killing civilians in Syria with its airstrikes.

The anti-Moscow chants were met with slogans in support of Russia. Lavrov told the delegates to let him finish speaking, saying they would have their say later.

The plenary session also saw some delegates squabble over who should be chosen to preside over the congress. 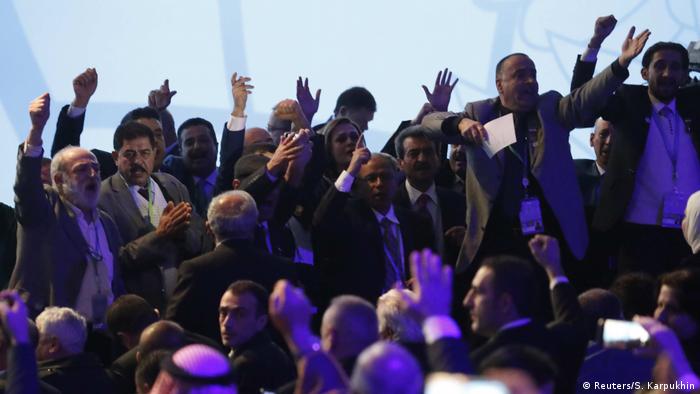 Some delegates shouted slogans against Moscow for killing Syrians with its airstrikes.

Major global powers such as the United States, Britain and France did not take part in the conference, citing what they said was the Syrian government's refusal to properly engage.

Read more: US mission creep in Syria: Is it legal?

Western countries support a separate UN-mediated peace process, which has so far has failed to make much headway toward ending the seven-year civil war. The main sticking point has been the opposition's demand that Assad play no role in a future political transition, a demand the government has rejected.

"The resolution of this crisis will happen urgently through a solution under United Nations auspices in Geneva. France has that as an immediate objective. It's not happening in Sochi, it must happen in Geneva," French Foreign Minister Jean-Yves Le Drian said in Paris on Tuesday.

UN envoy Staffan de Mistura, who has been leading the talks in Geneva, attended the Sochi conference.

Mistura said the participants agreed to have the Sochi process aid the talks in Geneva, which is the legal platform for resolving the Syria crisis.

"I will be indicating as soon as possible — because Syria cannot wait — how I intend to proceed," Mistura said at the close of the conference, adding that it would require further consultations.

Iran and Russia will set the agenda at the Astana talks as the president's "protecting powers" have effectively taken control of government, writes DW's Kersten Knipp. The US is to send a representative to the talks. (02.05.2017)

Representatives of the Syrian opposition and President Bashar al-Assad's regime are meeting in Astana for a sixth round of talks. They are hoping to secure a ceasefire, but how far off is a lasting peace agreement? (14.09.2017)