Syria began its descent into civil war in early 2011, when government security forces shot and killed protesters. But if President Bashar al-Assad thought a show of force would end the protests, he was wrong. 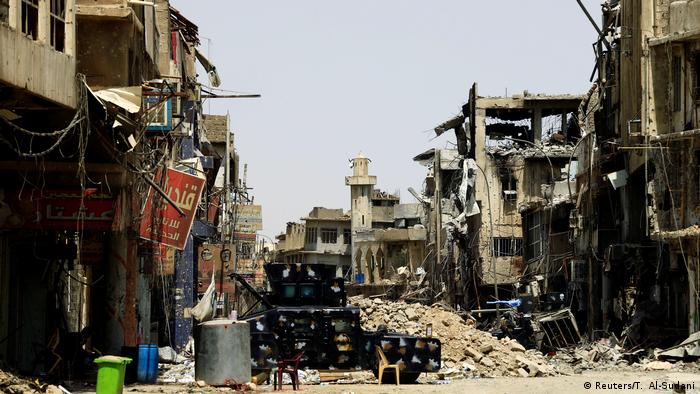 March 15, 2011: Demonstrations break out in the city of Daraa after security forces detain a group of boys accused of spray-painting anti-government graffiti on their school walls.  Security forces open fire on the unarmed protesters, killing four. They are believed to be the first deaths related to the uprising. But rather than quelling demonstrations, the brutal crackdown by President Bashar al-Assad's forces provokes more protests.

March 28, 2011: The protests in Daraa have been continuing for several days, with a crackdown by security forces reportedly claiming some 60 lives up to now.

August 18, 2011: In response to the unrelenting crackdown across the country, US President Barack Obama calls on Assad to resign and orders all Syrian government assets in the US to be frozen.

July 19, 2012: The fighting spreads to Aleppo, the second-largest city in Syria and once its commercial hub.

Obama warns that if Syria uses chemical weapons, it will have "enormous consequences" that will change his thinking about intervening in the country's civil war. He infamously calls it a "red line." But over the next year there will be two gas attacks that drew international condemnation.

March 19, 2013: A gas attack kills 26 people, at least half of them government soldiers, in the northern town of Khan al-Assal. A UN investigation concludes that sarin nerve gas was used, but cannot determine who used it. Both the government and the rebel forces accuse each other of using the prohibited gas.

August 21, 2013: A far deadlier sarin gas attack kills hundreds in the rebel-held suburbs of Damascus. UN investigators determine that ground-to-ground missiles packed with sarin were fired into civilian areas while people slept. The US and others blame the Assad regime for the attack.

August 31, 2013: Obama announces he'll ask Congress for authorization to strike back against the Syrian government, but the Republican-controlled legislature fails to act. 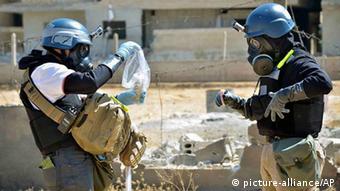 September 27, 2013: The UN Security Council threatens to use force against Syria if it doesn't destroy its chemical weapons stockpile. By mid-October, Syria signs on to the Chemical Weapons Convention; this prohibits it from producing, stockpiling or using chemical weapons.

June 23, 2014: The Organization for the Prohibition of Chemical Weapons (OPCW) announces that it has removed all of the Syrian government's chemical weapons. But government opponents say the Assad regime sill has hidden chemical weapons supplies.

September 23, 2014: The US launched limited airstrikes against "Islamic State" (IS) militants inside Syria.

August 7, 2015: The UN Security Council authorizes the OPCW and UN experts to investigate new reports that Assad has, again, resorted to chemical weapons. This time he is suspected of repeatedly using chlorine gas in opposition areas populated by civilians.

September 30, 2015: After providing military aid behind the scenes since the war's inception, Russia actively enters the conflict. The Russian air force carries out relentless bombing attacks against Assad opponents and is also accused of deliberately bombing civilian targets, including hospitals. A civil war that had been deadlocked for four-and-a-half years begins to move steadily in favor of the Assad regime. 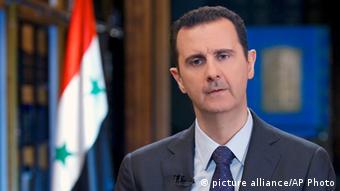 Assad has been bolstered by Russia's aid

August 24, 2016: The joint OPCW-UN panel determines that the Syrian military used chlorine gas in three separate attacks against its opponents - two of those attacks were carried out by helicopter. But investigators also determine that IS militants also used mustard gas

February 28, 2017: Russia and China veto a UN Security Council resolution calling for sanctions against the Syria government in response to its use of chemical weapons.

April 4, 2017: At least 58 people are killed in what appears to be a nerve-gas attack on the town of Khan Sheikhoun in rebel-held Idlib province. Victims show telltale signs of a chemical weapons attack, including convulsions and foaming at the mouth. Witnesses claim the attack was carried out by Russian or Syrian jets, but both Moscow and Damascus deny the allegations.

April 6, 2017: The US fires a barrage of cruise missiles at the military base where the attack is believed to have originated from. US President Donald Trump, who campaigned as an isolationist and a populist, defends the attack, calling it a "vital national security interest of the United States."

May 9, 2017: Trump approves military plans to arm the Kurdish YPG as part of the effort to retake the Syrian city of Raqqa from IS militants. The move infuriates NATO ally Turkey, which has long sparred with the US over the YPG. Washington considers the YPG crucial to defeating the IS in Syria. But Ankara views the group as an extension of the Kurdish PKK militant group, which it (and Washington) considers a terrorist organization.

July 7, 2017: Trump and Russian President Vladimir Putin agree to a limited ceasefire in three war-torn provinces in southwest Syria. After six years of fighting residents are weary of the conflict, but wary about whether the ceasefire will hold.

July 9, 2017: The ceasefire takes effect at 12 noon and an uneasy calm prevails during the initial hours.

July 23, 2017: Syrian warplanes bomb the suburbs of Damascus, just one day after the military had declared a cessation of hostilities in the area.

Throughout the more than six-year conflict, there have been multiple attempts at countrywide peace talks - most backed by the UN but some backed by Russia - but all of them have failed. Likewise, the UN's independent Commission of Inquiry on Syria has issued nearly a dozen reports chronicling war time atrocities. 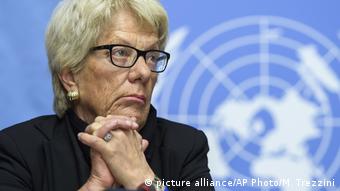