German Chancellor Angela Merkel has met with Brazilian President Dilma Rousseff during a short visit to Brasilia. The chancellor is in Brazil to attend the German national football team's first World Cup match. 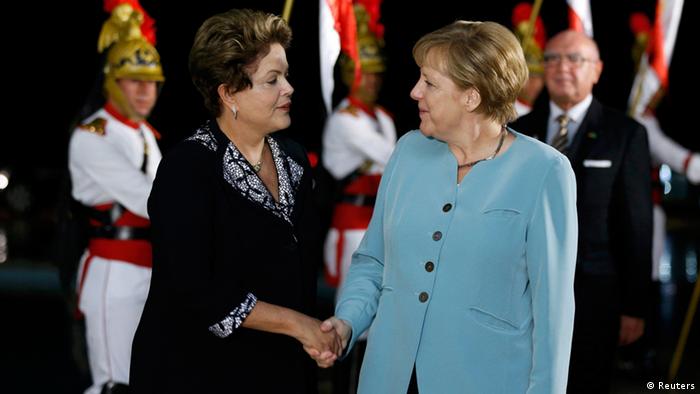 Following her meeting with President Rousseff, Chancellor Merkel said Germany and Brazil, which are the biggest economies in Europe and Latin America had much to gain from intensifying their already deep trading ties. The chancellor said she would do her utmost to ensure that a free trade deal between the European Union and South America's Mercosur trade bloc is reached.

"We have a lot of interest in reaching a free trade agreement between Mercosur and the European Union," she said. "I will do what is possible so that we can take a step forward and overcome the obstacles."

For the past 15 years, the European Union has been in negotiations toward a free trade agreement with the South American trading block Mercosur, which groups Brazil, Argentina, Uruguay, Paraguay, and Venezuela.

Among the sticking points have been European Union agricultural subsidies and the opening up of the industrial sector in Mercosur countries to competition from the EU.

The two leaders also congratulated each other on a joint resolution the two countries introduced at the United Nations General Assembly late last year, which calls for an end to excessive electronic surveillance.

The resolution, which did not name a specific country, was widely regarded as being in response to reports of mass surveillance by the US National Security Agency (NSA). This followed reports that the NSA had tapped the electronic communications of both Merkel and Rousseff.

Chancellor Merkel said she and the Brazilian president had also agreed to begin holding regular consultations between their two governments, beginning next year.

Following her short stop in Brasilia, the chancellor flew on to Salvador in the northeast of the country, were she is to attend Germany's first game at the World Cup, when they face Portugal later in the day.

Comments following talks between the EU and Brazil suggest progress on a long-sought free trade agreement. However, their joint summit in Brussels also touched on their planned response to the NSA surveillance scandal. (25.02.2014)

South American Mercosur bloc leaders have told the US to stop alleged spying on telecommunications in their region. The five-nation group insisted on their right to offer asylum to US whistleblower Edward Snowden. (12.07.2013)

President Dilma Rousseff has urged Brazilians to rally behind the staging of the 2014 World Cup, claiming the nation is ready. Strikes, and protests about the cost of staging the competition, have rumbled on. (11.06.2014)