President Dilma Rousseff has urged Brazilians to rally behind the staging of the 2014 World Cup, claiming the nation is ready. Strikes, and protests about the cost of staging the competition, have rumbled on. 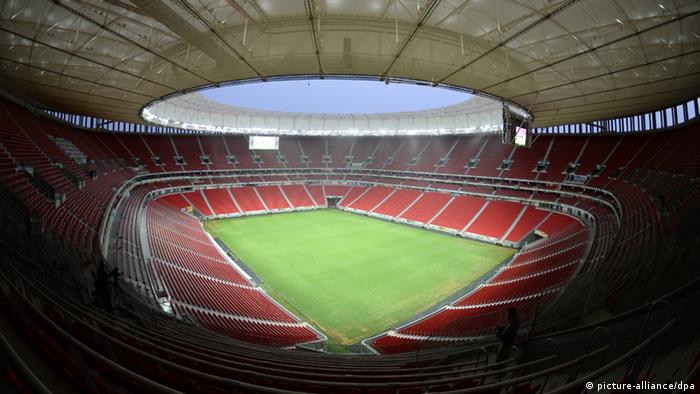 Brazilian President Dilma Rousseff encouraged Brazilians to be optimistic about the 2014 football World Cup, saying its successful staging would represent a triumph for the national spirit.

"From Thursday, the eyes of the world will turn to Brazil, sharing in the greatest World Cup in history," she said in a prerecorded television address on Tuesday.

"Brazil overcame the main obstacles and is ready on and off the pitch for the cup," said Rousseff. "The pessimists... have been defeated by the hard work and determination of the Brazilian people, who never give up," she added,

In her speech, Rousseff addressed the national team directly. "Beneath those green and canary jerseys, you embody a powerful legacy of the Brazilian people. The national team represents nationality," she said.

Meanwhile, the imminent threat of strike action has temporarily subsided with subway workers in Rio calling off a threatened strike on Tuesday after winning a wage increase of 8 percent. A five-day transport strike in Sao Paulo was also suspended on Monday, although it could be resumed as the competition gets underway if sacked employees are not reinstated.

Optimism about team, not legacy

With just one day until the start of the World Cup, pessimism about the benefits of the tournament to ordinary Brazilians remains entrenched. The initial euphoria that accompanied Brazil's being awarded the World Cup back in 2007 subsided, with falling support and growing anger as the government began to pick up an increasing proportion of soaring infrastructure costs.

A survey last weekend shows that, while 68 percent of Brazilians believe they will win the cup, 54 percent say the hosting of it will do the country more harm than good.

Rousseff was not the only one to voice optimism about the World Cup ahead of Brazil's kickoff in the opening match against Croatia on Thursday. Argentina football legend Diego Maradona on Tuesday gave his opinion in a filmed conversation with Venezuelan President Nicolas Maduro, due to be televised by the television multinational Telesur.

"The World Cup still has not begun," said Maradona told the Venezuelan president. "Dilma has some problems with strikes that she is going to resolve and Brazil will have a great World Cup," he said.