Brazil has the World Cup blues | World| Breaking news and perspectives from around the globe | DW | 29.05.2014

Brazil has the World Cup blues

Mass protests in Brazil ahead of the 2014 World Cup are turning the championship into a political issue. The public mood is turning sour, with many people angered by the amount being spent on costly soccer stadiums. 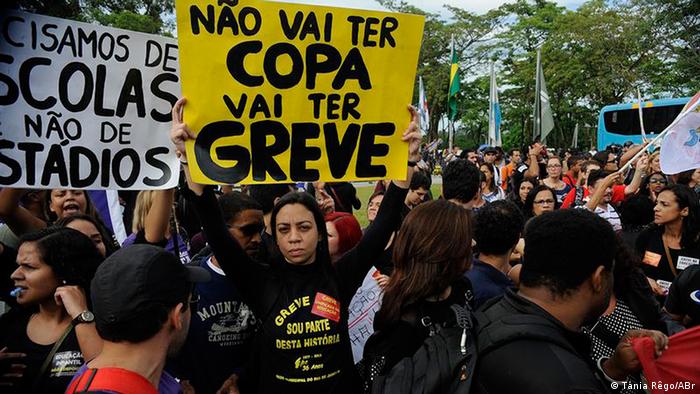 The scene was not what the Brazilian national soccer team was used to. When they arrived at Rio de Janeiro's International Airport, the crowds gathered to welcome them were not the usual enthusiastic soccer fans decked out in green and yellow shirts.

Instead, angry teachers thrust pamphlets at the players that read "Believe me, education is worth more than Neymar" and "We don't need the World Cup."

The team's 22-year-old super star Neymar wasn't the only one who was bewildered. As a rule, the Brazilian team is overwhelmed by fans, but instead they found themselves surrounded by protesting homeless people. In the end, the squad needed police protection for the team bus to be able to make its way through the throngs of demonstrators.

No boisterous fans, no one beating the drums, no samba dancers – Brazil has been seized by World Cup blues. Just days ahead of kickoff, a new wave of nationwide protests against costly stadiums and neglected schools and hospitals has hit the country. Teachers, bus drivers and police officers are all threatening to go on strike. 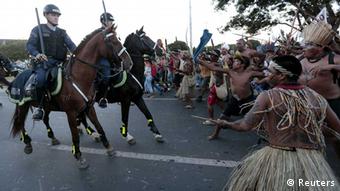 "Soccer and politics don't actually have anything to do with each other, but that's changing at the moment," says Valeriano Mendes Ferreira Costa, a pollster at Unicamp University in the city of Campinas, north of Sao Paulo. "For Brazil, it's the first really political World Cup."

In the capital Brasilia, hundreds of indigenous people in full war paint and armed with bows and arrows stormed the ramp to the Congress building on Tuesday (27.5.2014) to protest a lack of protection for their reservations.

The World Cup has not only become a political issue, it's also turning into a purely Brazilian event. According to the Tourism Ministry, 80 percent of the matches' visitors will be Brazilian: Just 500,000 of the 2.7 million tickets sold so far were purchased by foreign tourists. Authorities are expecting 600,000 foreign visitors, compared to the 1.3 million soccer fans who traveled to Germany for the 2006 World Cup. 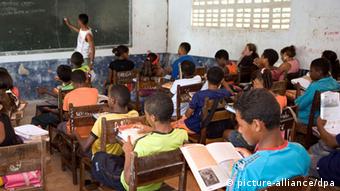 Tourism statistics from Rio de Janeiro, Brazil's foremost tourist attraction, confirm the national character of the event: The majority of visitors will be Brazilian. According to the city's Riotur tourism office, about 400,000 of 950,000 visitors are foreigners.

"There's not as much pressure for everything to function perfectly because there aren't so many international visitors at this World Cup," Valeriano Costa says. After all, he adds, Brazilians are used to the everyday chaos and aren't surprised when things don't go smoothly.

Expectations that the World Cup would act as a catalyst for economic growth and the development of a nationwide traffic infrastructure have almost dwindled away. The nation's enthusiasm for the soccer tournament has evaporated, and there is nothing left of the elation that gripped the country in 2007 when Brazil was elected host nation.

Back then, about 80 percent of the population was in favor of holding the World Cup in Brazil, according to an opinion poll conducted by the Brazilan daily Folha de Sao Paulo. A year ago, during the Confederations Cup in July 2013, 65 percent were still in favor. But these days, approval of the upcoming World Cup in Brazil has shrunk to 48 percent. 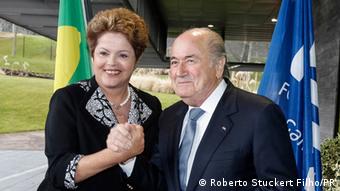 In an article in Spain's El Pais newspaper earlier this month, former Brazilian President Luiz Inacio Lula da Silva blamed the opposition for the bleak mood in the country. "The World Cup is being misused for the election campaign," the 69-year-old wrote. "Certain people seem to have their hopes pinned on the World Cup failing, as if that would improve their chances in the election."

Clearly, what matters is victory beyond the soccer pitch, says Dora Kramer, a columnist at the O Globo daily. "If everything goes well, it will be attributed to the government," she predicts. "If it doesn't, President Dilma Rousseff will pay the price in the election in October."

The protests against the World Cup herald a new era, says the pollster Valeriano Costa. "As a commercial mega-event, the World Cup is increasingly losing support," he says. "In future, FIFA will avoid countries where protests can be expected – it's a risk they will no longer want to take."

They are victims and heroes at the same time: Black Brazilian football players are regularly subjected to racial abuse. Authorities in the country say they want to use the World Cup to heighten awareness of the issue. (23.05.2014)

A FIFA presidential candidate has lashed out against the unequal distribution of wealth among the continent's clubs. He argued that European football was now more divided than it ever was during the Cold War. (23.04.2014)