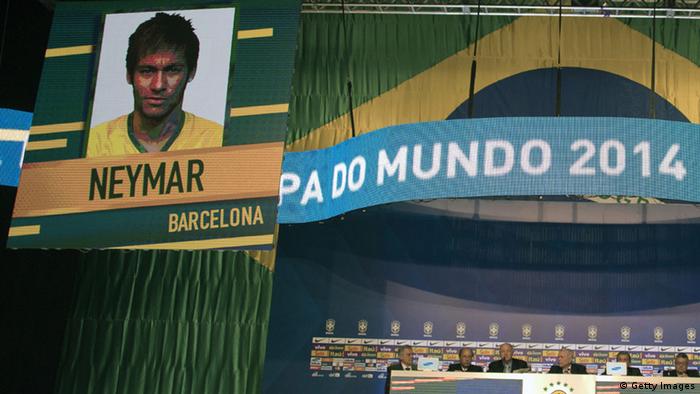 Brazil coach Luiz Felipe Scolari has named his preliminary 23-man squad ahead of the 2014 FIFA World Cup with two representatives from the Bundesliga in Dante (Bayern Munich) and Luiz Gustavo (Wolfsburg).

After winning the 2013 Confederations Cup, the traditional prelude to the main event, Brazil are one of the main favorites to win the trophy on home soil. Scolari has continued with the same blend of youth and experience, and foreign and domestic club players, for the competition which kicks off on June 12.

Dante and Gustavo will likely be prominent figures for the Seleccao, while the goal-scoring hopes are on the shoulders of 22-year-old Barcelona star Neymar, who has 30 goals in 47 international appearances. He won the Golden Ball at the Confederations Cup for being the best player and was named in FIFA's Team of the Tournament.

Brazil have won the World Cup on five occasions - more than any other nation. The last of their successes was under the management of Scolari in 2002. There are no places in Scolari's squad this time, however, for veterans Kaka, Robinho and Ronaldinho.

Despite having become a regular under Pep Guardiola, Rafinha of Bayern Munich misses out, while a surprise omission is that of Lucas Moura from Paris Saint-Germain. Two of his team-mates are included - Maxwell and Captain Thiago Silva - but the biggest single club representation is from one of Scolari's former clubs, Chelsea.

In defense, David Luiz is the vice-captain and a Champions League semi-finalist for the English club. He is joined by midfielders Oscar, Willian and Ramires. The preliminary 23-man squad for the host nation also contains four domestic players from three of Brazil's strongest league clubs. Scolari must submit his final roster of 23 players to FIFA by June 2.

Each player ensures a vibrant welcome to their home city, as shown by the introduction of Bernard (Shakhtar Donestk) in Belo Horizonte during the Confederations Cup where he was given a rapturous welcome by the Brazil supporters.

The Seleccao face Croatia on June 12 to open the competition in Sao Paulo, before facing Mexico on June 17 in Fortaleza and Cameroon in Brasilia on June 23.