While every nuance of Rammstein’s tour makes the news in Germany on an almost daily basis, fans continue to devour the band's images, recordings and controversies. DW was in Berlin to capture the band's live show.

After beginning their 22-city Europe Stadium Tour in Gelsenkirchen on May 27, Rammstein is scheduled to perform next in Paris on June 28 and 29, continuing on to Brussels, Frankfurt, Prague, Moscow, Stockholm and other cities before the final appearance on August 22 in Vienna.

In the meantime, every detail of the sold-out tour and every escapade of its members — including an assault charge against front man Till Lindemann — has been reported almost daily in the German press. Part of the band's successful PR strategy is to never comment on the provocations and imagery, often hotly discussed, that are used in its videos and live appearances. That, in turn, generates even more discussion.

The current tour began days after the release of the band’s seventh, self-titled album in May. With its jarring images of 2,000 years of German history, the video of "Deutschland," the first single release, was viewed more than 25 million times on YouTube within the first week of release. 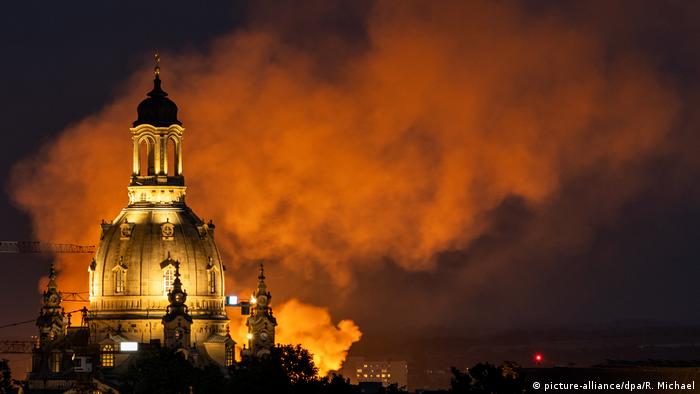 One reason for the widespread fascination with Rammstein lies in the pyrotechnical spectacle of its live shows, while the band's popularity abroad is so great that in some regions of the world, its members are better known than official representatives of the Federal Republic of Germany.

The band recently announced a continuation of the tour in stadiums in Europe in 2020. The 18 concerts include appearances in Leipzig, Stuttgart, Düsseldorf and Hamburg.

DW recently produced this exclusive video of Rammstein's show at the Olympic Stadium in Berlin on Saturday, June 22.

The successful British synth-pop band gave a press conference in Berlin revealing details of their new album, "Memento Mori." They reflected on the death of their bandmate Andy Fletcher.

Rio Reiser was a poet, rebel, rock star and a cult figure of the leftist resistance in Germany. A square in Berlin's district of Kreuzberg has now been renamed after him.