Putin′s war in Ukraine puts Germany′s Greens in a tight spot | Germany | News and in-depth reporting from Berlin and beyond | DW | 01.04.2022

Anti-nuke, anti-war, pro-planet: These are tough days for Germany's Greens, who have long stood for disarmament and renewable energy. Now governing in a crisis, they find themselves needing to go the opposite way. 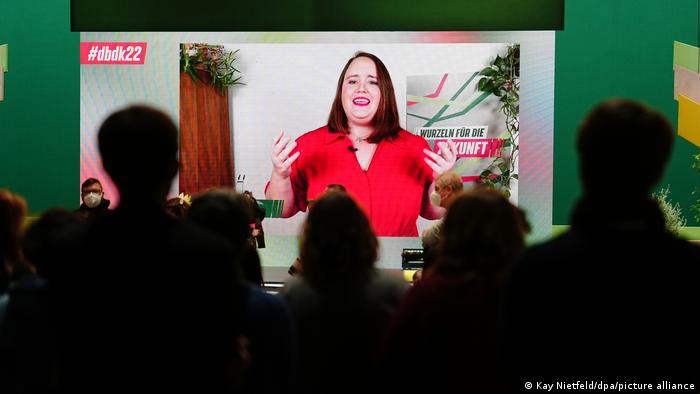 It's not easy being Green. No one feels that these days quite like Robert Habeck, the environmentalist party's former co-chief. Now, as Germany's economic affairs and climate action minister, he oversees weapons exports and works to secure energy supply for the country.

Habeck's huge portfolio makes him a central figure in Germany's Zeitenwende, a term for epochal change that his boss, Chancellor Olaf Scholz, used to define the impact that Russia's invasion of Ukraine has had on the country's foreign policy and position in the world.

The Greens came to power in 2021 promising to end the Merkel-era foot-dragging on climate change. Their aspirations got muted somewhat during coalition talks with the center-left Social Democrats (SPD) and neoliberal Free Democrats (FDP), but they managed to move up Germany's phase-out of coal power "ideally" to 2030, from 2038, and aim to go carbon neutral by 2045, instead of 2050.

You govern the country that's been handed to you, however. In a news conference earlier this year, Habeck was already tempering expectations, with visual aids showing just how much climate catch-up Germany had to do. You could probably forget about meeting national goals for this and next year, he said.

That was before inflation and energy prices, both already reaching all-time highs, bounced even higher as a result of the war and the West's dramatic sanctions in response. It was before Germany had to seriously worry about Russia cutting off the gas it is so dependent on.

"We knew, or could have known, that not only is it dumb to put all your eggs in one country's basket, but it was probably also not a great idea to put them in this country's," Habeck said about Russia at an energy conference this week in Berlin.

As a result, the long-term global climate crisis has taken a back seat to the immediate European security crisis, at least for now. Habeck has struck gas and oil agreements with counterparts in Qatar and the United Arab Emirates; his party has gone along with government plans for a temporary reduction in gas taxes; and negotiations are ongoing with allies, as well as German and international energy companies on how to boost supply of fossil fuels to keep the economy's lights on and residents' homes warm through next winter.

None of this, Habeck and other officials say, comes at the expense of the government's ambitions for fighting the climate crisis. 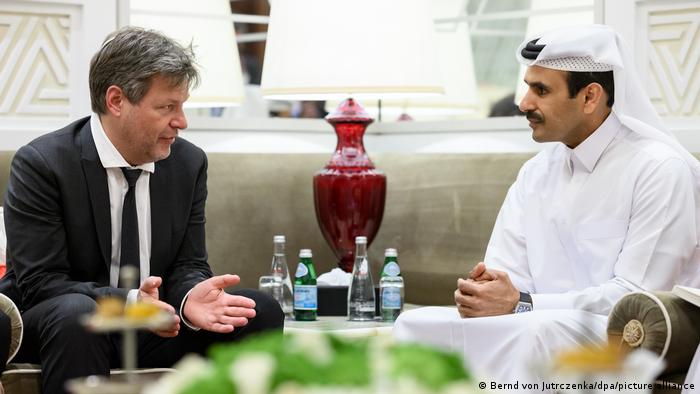 "There is only one sustainable answer to energy independence and high energy prices," Scholz told the Bundestag, Germany's parliament, in an address last month. "Renewable energy and energy efficiency."

Lower-hanging measures that the Greens have long sought, such as a general speed limit on the country's highways, remain off the table. That could cut gas consumption by 8%, according to DIW Berlin, an economic research institute.

Habeck has called on businesses and residents in Germany to reduce their gas consumption as much as possible.

"We are in a situation where I have to say clearly that every kilowatt hour of energy saved helps," he told reporters on Wednesday, after activating the first of a three-tier gas emergency plan for the first time in the republic's history. "You are helping Germany, you are helping Ukraine, when you reduce your use of gas or energy in general."

None of these plans goes down easily with the party, which its co-chief, Ricarda Lang, has called the "least worst decision."

"This hits you right in the gut," she told DW in a statement. "But I sense that the party base is extremely conscious of our responsibilities."

For more salt in the wound, 2022 is the year when the Greens had hoped to focus on the fruition of a decades-long goal: the end of nuclear power. Habeck has categorically rejected any reversal on closing Germany's remaining reactors.

Despite renewed grumbling over the 2011 decision to accelerate the phaseout, which was prompted by the Fukushima disaster and pushed by an environmental protest movement allied with the Greens, the energy researcher Manfred Fischedick said it had no bearing on current energy woes.

"We've seen in the last 10 years that this clear decision, along with a step-by-step phase-out plan, led to a drastic expansion of renewable energy, including the reduction of photovoltaic and wind energy prices," Fischedick, the scientific managing director of the Wuppertal Institute, a sustainability think tank, told DW.

Renewables have "overcompensated" for the absence of nuclear, he said, and, as they are sources of electricity, not gas, the question of dependence on Russia would still be there.

It may seem strange for a party that emerged from the anti-war camp to support a massive increase in military spending, which Germany is poised to do. During the election campaign last year, the Greens opposed NATO's guideline of spending 2% of GDP on defense, calling it "arbitrary." It has also criticized the western alliance's nuclear sharing concept, which requires German jets to carry American nuclear weapons.

The government's coalition agreement calls for a "renewed global offensive" on disarmament and arms control. At the same time, and at the Greens' urging, Germany has signed up to a more robust role in foreign policymaking, with a harder line against autocracies and human rights abusers, including Russia and China.

Despite the party's pacifist streak, the Greens' Joschka Fischer advocated for military intervention in Kosovo on humanitarian grounds — Germany's first combat mission since World War II — as foreign minister during the party's last stint in power.

Greens co-chief: The Ukranian people are fighting for us

As such, security policy is cause for fewer party palpitations than energy compromises. Last year, Habeck himself called for delivering "defensive weapons" to Ukraine, though he had to walk the statement back when it met fierce criticism from Germany's political establishment — which at that time officially refused to arm parties in active conflict zones.

The Greens, whose pragmatic wing outshines its more fundamentalist side, is largely at peace with the role of military might in diplomatic efforts.

"Our basic goals haven't changed," Omid Nouripour, the party's co-leader, told DW. "We need more efficient military procurement. We need more European cooperation on security. And above all else we need a massive expansion of renewable energy, which makes us independent."

A version of this article was first published in German.

Robert Habeck, in his first visit to Brussels since taking office, said Germany would resist an EU attempt to call atomic power "sustainable." He said Europe should instead focus on new sources of clean energy.