US set to upgrade controversial nukes stationed in Germany | Germany | News and in-depth reporting from Berlin and beyond | DW | 26.03.2020 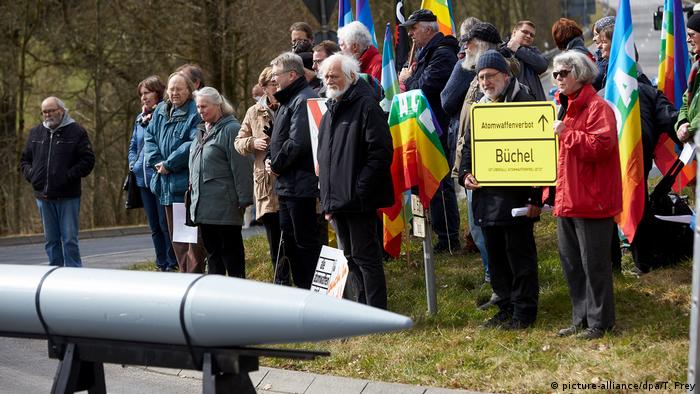 Viewed from above, the fields surrounding Büchel air base stretch out like a greenish-brown patchwork quilt, punctuated by the small villages and woodlands that make up the Eifel region in western Germany.

Take a closer look at satellite imagery, and you can make out several dozen camouflaged airplane hangars. Hidden deep below them lies a carefully guarded secret: underground vaults housing American nuclear bombs that date back to the Cold War.

The precise number of bombs stored in the underground vaults in the air base is unclear. Estimates range between 15 to 20, and their location is a state secret. So secret that local resident Elke Koller, a now retired pharmacist, only found out about their existence through media reports in the mid-1990s — despite being a member of the local Green party at the time.

She told DW that learning of their existence came as a "complete shock." She has since become a veteran protester, organizing local marches and rallies against the bombs.

The German government has never officially confirmed the existence of the nuclear bombs in Büchel. Indeed, parliamentarians would risk prosecution on the grounds of divulging a state secret, should they officially acknowledge their location.

On the record, the Germany government only admits to being part of what is officially termed a "nuclear sharing agreement." 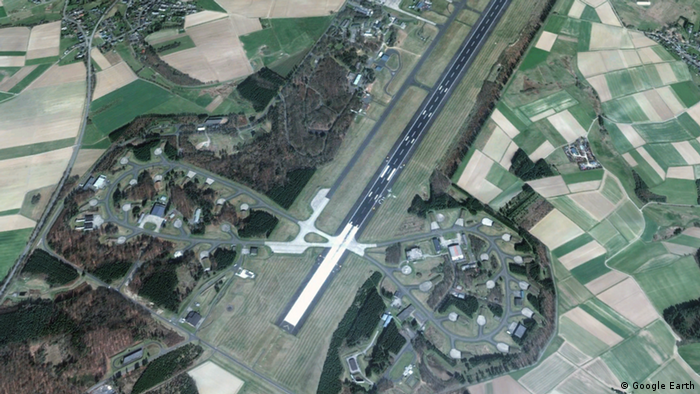 Read more: What you need to know about the US military in Germany

In the case of a nuclear strike, the American soldiers who guard the bombs located on the German air base — with an order to shoot at any intruders — would attach the bomb to German fighter jets and activate the code. Then German crews would embark upon what insiders refer to as a "strike mission" — delivering the American bombs to their destination.

That would, in fact, be the first time that crews come in closer proximity with the closely-guarded bombs: according to one pilot, who spoke to DW on condition of anonymity, they only train with dummies.

This agreement — American bombs guarded by American soldiers on a German base but flown by crews and planes of Germany's military forces, the Bundeswehr — dates back to the Cold War and NATO's nuclear deterrence strategy aimed at keeping the Soviet Union at bay. Even today, NATO's nuclear posture is still an integral, some would even argue paramount, component of its strategic make-up.

In essence, the nuclear sharing agreement provides for member states of the military alliance without nuclear weapons to partake in planning and training for the use of nuclear weapons by NATO. Additionally, officials argue, it allows for their views to be taken into account by nuclear-capable countries, including the US.

While the precise number of American bombs stored in Europe is unknown, estimates put them at roughly 150. Germany, Belgium, the Netherlands and Italy are all part of the sharing agreement. With the exception of those on Italian soil, all of the bombs are located within a few hundred kilometers of each other.

2010: Parliament decides to work towards withdrawal

In March 2010, Germany's parliament, the Bundestag, passed a cross-party resolution urging the government to "emphatically" work towards getting its American allies to withdraw all nuclear weapons from Germany. It followed then-US President Barack Obama's call to create a world without nuclear weapons.

But, a decade on, that goal seems ever more elusive, following Russia's annexation of Crimea in 2014 and investment in nuclear-capable medium-range missiles. Now, rather than working towards the bombs' withdrawal, the US military is set to modernize and upgrade them.

In his office in the Bundestag, Tobias Lindner, a member of parliament for the opposition Green party, disparagingly called Germany's nuclear sharing agreement "an expensive, dangerous and antiquated symbolic contribution to have a say within NATO."

Faced with what he calls a "state-of-the-art Russian air defense," NATO should rather invest in a modern missile defense system and reconnaissance sensors, he believes.

Lindner thinks it unlikely that Russia would be duly impressed by the bombs flown by Germany's Tornado jets, which were first introduced in the 1980s. They would probably need to be refueled in order to make it to Russia to drop their payload — if they were to even make it past Russian air defense without being shot down. 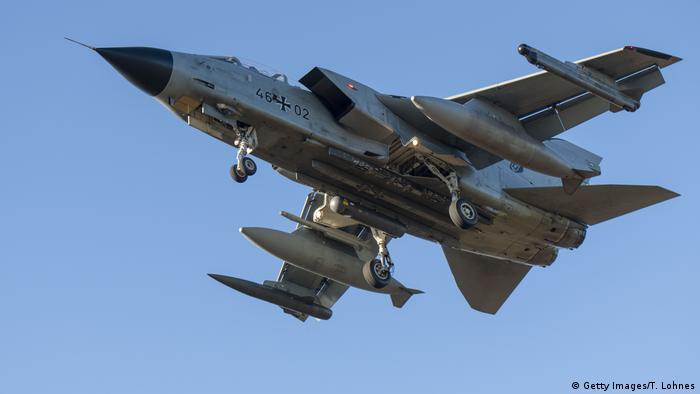 Germany's Tornado fleet is swiftly nearing the end of its shelf life and the cost of maintaining a fleet for the nuclear mission is skyrocketing. It is also leading to a shortage of flightworthy planes needed for the nuclear sharing agreement and other missions.

But is the spiraling price a worthwhile investment? Member of Parliament Lindner isn't convinced, but concedes that—– despite being a member of the parliamentary defense committee — he just doesn't know what kind of information sharing with nuclear countries, particularly the United States, Germany is actually privy to. The government, he laments, does not inform Parliament — even confidentially — on matters discussed in the Nuclear Planning Group.

The Nuclear Planning Group is made up of the defense ministers of all NATO member states, with the exception of France, irrespective of whether they are part of the nuclear sharing agreement or not.

But it is hard to gauge whether nuclear sharing countries receive more information than those who are not — or whether their views are indeed considered by Washington, given that many meetings within NATO happen at an informal level.

The latter is an argument often put forward by German officials and politicians in favor of nuclear sharing. But that "is a complete fantasy," according to Hans Kristensen, director of the Nuclear Information Project at the Federation of American Scientists and a leading experts on nuclear sharing and weapons.

"I've never heard anyone in the US Air Force, Strategic Command or Department of Defense say that they somehow take into consideration special German views about the use of nuclear weapons," Kristensen told DW.

Should Germany withdraw from the sharing agreement, "it would have exactly the same ability to influence US thinking" on nuclear matters as it does now.

Heinrich Brauss, a retired Lieutenant-General of the German army, who served as NATO Assistant Secretary General for Defense Policy and Planning until 2018, disagrees. Should Germany decide to withdraw, the other European nuclear sharing countries would most likely follow suit, he told DW. "That would rock NATO's nuclear sharing agreement and burden sharing — or maybe even lead to it unraveling completely."

And then, in turn, he believes the United States would be far less inclined to share any information on matters of nuclear policy and planning: "In the worst case, we would be completely cut off from any inside information concerning our own security."

For now, however, despite a clear majority of its citizens firmly opposed to nuclear weapons, Germany seems unlikely to withdraw from the deal any time soon. Rather, it is set to receive modernized bombs. The nukes stored in Büchel, Kristensen explained, are of a type — the B-61-3 or B-61-4 — that was introduced in the late 1980s and early 1990s and they coming to the end of their cycle. 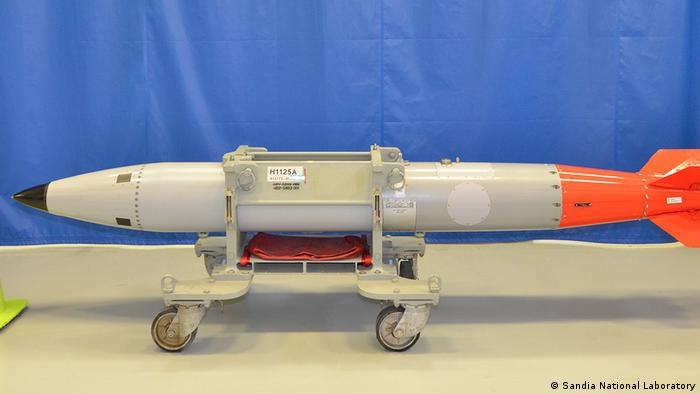 The modernization program, which will see the old bombs being dismantled and new ones delivered to American military sites in the US and across the world, is extremely expensive. "It's the most expensive gravity bomb that the US has ever built," according to Kristensen. "Some people have calculated that it would be cheaper to build the bomb in solid gold."

The new bomb — the B-61-12 — will have "significantly enhanced capabilities," says Kristensen: It is equipped with a tail kit, which enables it to be delivered and hit its target much more accurately. Kristensen has modeled its accuracy at about 30 to 60 meters (98 to 196 feet). The current bombs are simply dropped from the plane, rather than like ones with tail kits, which guide themselves once released.

Are new bombs more likely to be deployed?

Many experts worry that may make the bomb more attractive to deploy — as, rather than wiping out an entire region, it could be used to strike a precise target. Kristensen agrees that militarily that may be the case, but cautions that it would still be politically difficult to breach the nuclear taboo that has been in place since 1945.

It remains unclear when Germany will actually receive the bomb, as there has been a delay in the production of the bombs in the US, due to problems reproducing components according to Kristensen. He estimates that it will take until at least 2022, maybe even 2024, for them to reach Büchel and the other European locations.

But, according to one pilot, first tests for the integration of the weapon onto German Tornado jets are set to happen this year. Once the software update has been tested, it could be rolled out for the entire fleet stationed in Büchel. Only a small circle is privy to the modernization process, he told DW.

The pilot doubts whether even the German commanding officer of Büchel would be informed about the bombs' arrival: Whenever an American plane arrives at the air base, he said, the entire airfield is closed off. "It's all so top-secret that you never know whether the plane has loaded Coca-Cola or bombs."

Only a world without nuclear weapons can be a "safe world," the German foreign minister said on a trip to Hiroshima. But that requires international consensus, and Germany won't be taking the first step. (22.11.2019)