In Germany, gridlock over nuclear-capable fighter jet | Germany | News and in-depth reporting from Berlin and beyond | DW | 10.01.2020 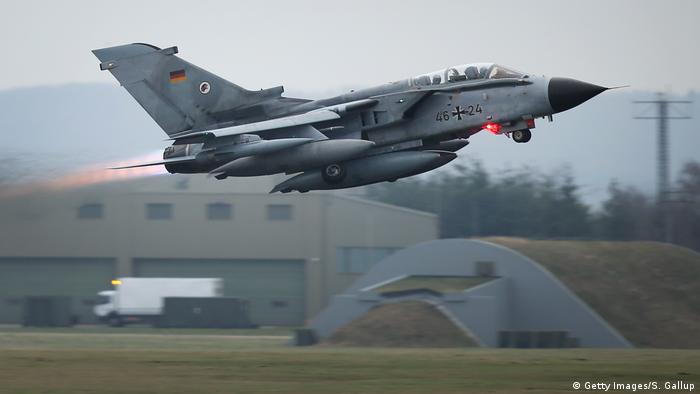 In a given week in late November, the number of flightworthy Tornado fighter jets stationed at Büchel Air Base varied widely: Sometimes, twelve out of the 45 planes were operational; soon after, less than a handful.

"That's pretty tight," according to one pilot.

He spoke to DW on condition of anonymity. For the air base, tucked away amid the picturesque plateaus of the Eifel region in western Germany, has a special, secret mission: It is here that American nuclear bombs are stored in what is officially termed a "nuclear sharing agreement."

In the case of a nuclear strike, German Tornado fighter jets and their crews would deliver the American bombs. 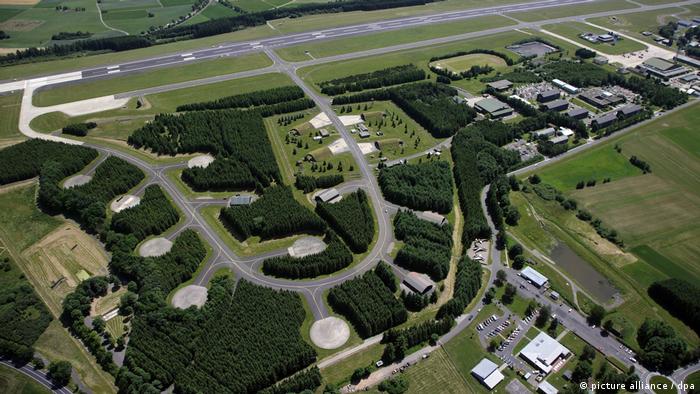 An aerial view of Büchel, where as many as 20 nuclear bombs are stored

Their location is a state secret. The German government has never officially confirmed the existence of the nuclear bombs in Büchel. The precise number of bombs stored in the underground vaults in the air base is thus unclear; estimates range between 10 to 20.

On the record, the Germany government only admits to being part of the sharing agreement, which dates back to the Cold War and NATO's nuclear deterrence strategy aimed at keeping Soviet influence at bay.

In essence, it provides for member states of the military alliance without nuclear weapons to partake in planning and training for the use of nuclear weapons by NATO and, officials argue, for their views to be taken into account by nuclear-capable countries, including the US. Germany, Belgium, the Netherlands and Italy are all part of the sharing agreement.

But as Germany's Tornado fleet is swiftly nearing the end of its shelf life, the cost of maintaining a fleet for the nuclear mission is skyrocketing.

"The increase each year is brutally high," as one parliamentarian put it.

DW has obtained a copy of an official document from the Ministry of Defense, which puts the expenditure for the Tornado fleet, including maintenance, procurement and development, at €502 million ($562 million) in 2018. This year, the figure is estimated to reach €629 million.

The problem is that the planes date back to the early 1980s. Until a few years ago, the fleet, which once numbered roughly 350 planes, was progressively reduced, meaning that retired airplanes could be cannibalized for spare parts.

Now, parts for the remaining 85 airplanes have to be manufactured at great cost — or taken from jets that are undergoing maintenance and built into those about to be returned to the Air Force, leading to long delays in planes becoming airworthy again.

The situation is so dire that pilots are struggling to fulfill the quota of flight hours needed to maintain their license — and it is leading to a shortage of flightworthy planes needed for the nuclear sharing agreement and other missions. 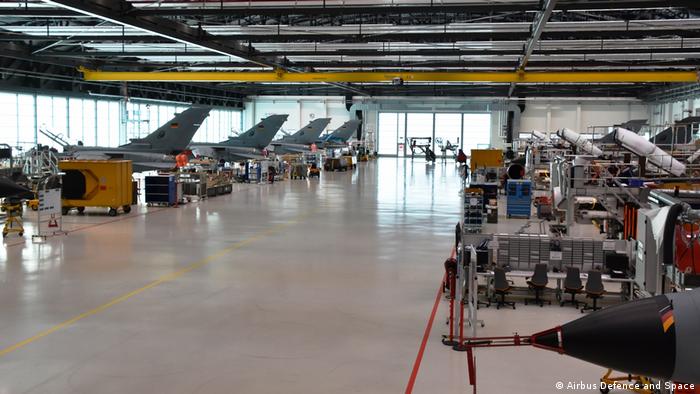 In early December, in an imposing purpose-built hangar at an Airbus' compound, civilian and military mechanics were busy doing maintenance on twenty disassembled Tornados — some of them were stripped of their varnish, a tangle of cables visible in their fuselage, their distinctive black nosecones propped beside them.

It is here, in the vast compound close to the sleepy Bavarian town of Manching, that the Air Forces' Tornado fleet undergoes its routine maintenance.

Planes rotate in every three years — and most stay for roughly 350 days, according to Katharina Semmler-Schuler, head of Tornado Maintenance, Repair and Overhaul at Airbus Defence and Space Germany.

Spare parts, she said, were indeed a problem — the process of rotating them from one plane to the next added an extra 20 days to the maintenance, she said. "And it's getting more and more difficult."

But despite the problems, Germany seems in no hurry to replace its fleet: While most other European countries have retired Tornado jets or are in the process of doing so, the German government has yet to decide which plane to replace it with.

DW spoke to several government and opposition politicians and members of the German Air Force — and they all agreed that a decision was urgent. The Tornado's operational capability is only guaranteed until 2025. After that, the costs for extending the fleet for another five years could be as high as €13 billion. Once a deal has been reached, it could still take several years for the airplanes to be built and then finally reach the Air Force hangars.

The decision has pitted different strategic, political and industrial interests in Germany and abroad against each other, making it difficult to reach a consensus for a deal that could be as high as €10 billion. 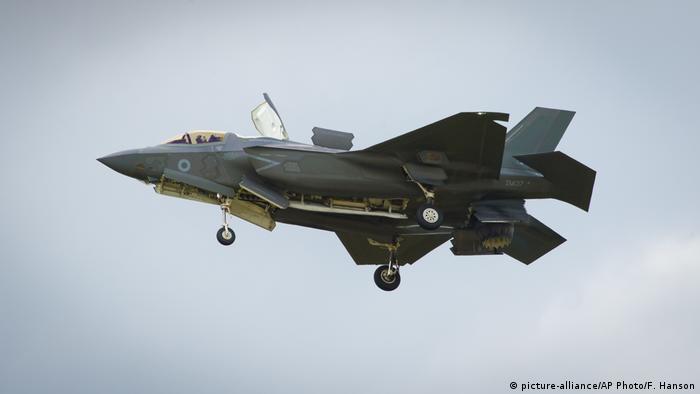 Talk to politicians and Air Force officials, and they name three possible airplanes: The F-35, F/A-18 or Eurofighter Typhoon.

Many within the German Air Force prefer the American F-35 fighter jet produced by Lockheed Martin, the most modern airplane available on the market.

American planes would come with established logistics chains and programs to quickly train pilots, compared to training in Germany which can drag on for years.

The other European nuclear-sharing countries — Belgium, the Netherlands and Italy — have all opted for the F-35.

But here this option seems to have been quietly dropped, in part due to French pressure: For Germany and France are in the early stages of developing a joint fighter plane — the Future Combat Air System (FCAS), which combines manned fighter jets with swarms of cloud-connected drones.

"We let the French blackmail us," one parliamentarian, who favors the F-35, told DW.

The French threatened to go FCAS alone, should Germany buy the modern American F-35 jets, which could make the government here less inclined to pour billions into the development of a possibly only slightly more state-of-the-art European jet that could take years, possibly decades, until it reaches the market. 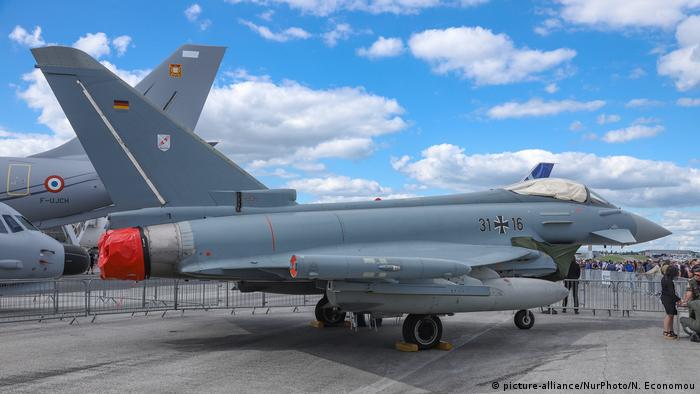 And, there is another reason some politicians are wary of the F-35: It is, they concede, basically a black box. "You don't know which information or data may be transmitted to America," one parliamentarian told DW.

In theory, Germany could add to its 138-strong fleet of Eurofighter jets, built by a European consortium owned by Germany, Spain, Italy and the United Kingdom. In Germany, the plane's final assembly is also done in Manching, where the Tornados undergo their maintenance, and it is an important regional employer.

During a recent visit to Manching, Wolfgang Gammel, Vice President of Airbus Defence and Space, did his best to promote his company's fighter jet to DW. "As long as there is a European option, Germany should buy European," he stressed.

Airbus knows that many within the Air Force are unhappy with the quality of planes that were delivered in the past — but Gammel pointed to overly bureaucratic and drawn-out military procurement policies in Germany.

Much is at stake for the company, as a deal would come with lucrative maintenance contracts which would secure jobs for decades.

In his office decked out with model fighter planes, he told DW that the Eurofighter was perfectly capable of replacing the Tornado fleet, including its nuclear capacity.

It is a tricky issue, as the US reportedly told the German government that it would take much longer to certify the Eurofighter for its nuclear role than any American aircraft — possibly up to ten years. That would push it close to the Tornados' end date.

Airbus maintains that Germany shouldn't have given the Americans an option, but simply told them to certify the Eurofighter, rather than let them favor the American-produced plane.

There is one capability, however, that Gammel admits that his plane does not yet have: suppression of air defense (SEAD). The term refers to the ability to suppress or destroy enemy air defense systems, such as missiles or radar.

While Airbus recently announced that it had begun research into SEAD capabilities, it is still in its early stages and could take several years to develop.

The F-35 and the F/A-18 in its Growler version both have SEAD capabilities.

A compromise seems to have emerged to split the deal among Eurofighter and the American F/A-18 Growler fighter jets, built by Boeing, opting for roughly 40 of each.

To keep Airbus happy, the maintenance of the American planes could be done in Manching.

But such a deal doesn't resonate well with Gammler. He told DW that the compromise would endanger engineering and development skills that would only come with a decision to buy Eurofighters, while doing the maintenance of the F/A-18 would secure less than 100 blue-collar jobs.

Much depends on Chancellor Angela Merkel's coalition partner, the Social Democrats (SPD). Off-the-record, several parliamentarians from Merkel's CDU and her sister party CSU, accused the SPD of dragging its feet in an effort to delay an unpopular decision that might anger its traditionally anti-nuclear party base.

That was not the case, SPD member of Parliament and party spokesman for defense Fritz Felgentreu, told DW. Rather, he pointed to the Ministry of Defense, which had yet to submit the official result of its inquiry into the various fighter jets to parliament. 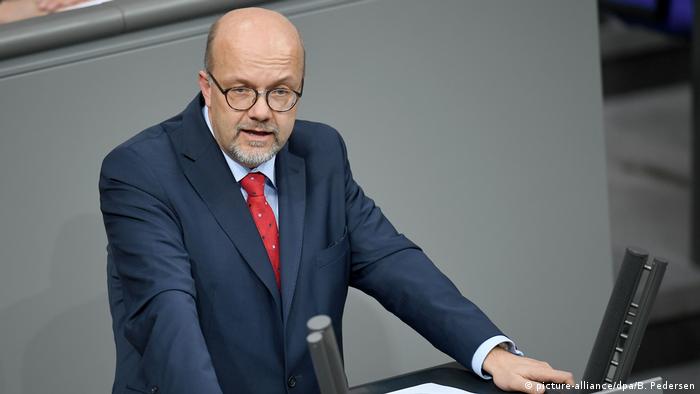 Like many of his party's foreign policy and security politicians, Felgentreu prefers to uphold the nuclear sharing agreement. In theory, Germany could pull out, as Greece and the United Kingdom have done, in the latter case following popular protests against the nukes. But "it wouldn't be prudent for Germany (to do so)," Felgentreu told DW. "If we do no one will consult us on how to develop NATO's nuclear strategy."

In early 2020, the two left-leaning leaders of the Social Democrats — Norbert Walter-Borjans and Saskia Esken — called for a withdrawal of all nuclear weapons in Europe and Russia, adding that the presence of American nukes in Germany was "problematic."

For now, it is unclear who might gain the upper hand within the party — and, Felgentreu admitted, the SPD's parliamentary group had yet to discuss the issue in any great detail. It is a politically sensitive topic: Should the SPD pivot away from the nuclear sharing agreement, it could potentially upend Merkel's increasingly fractious coalition. And so, some fear, while the defense ministry has promised a decision by early 2020, it may yet again be put off, despite the spiraling costs.

Meanwhile, frustration is mounting among the German Air Force. "We just want a plane that does its job," one Tornado pilot told DW wryly. "Time is running out."