Turkey's Erdogan threatens to close strategic bases to US military 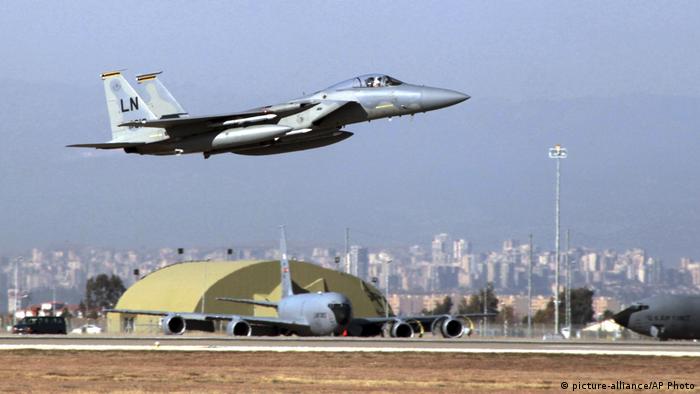 "If necessary, we'll close Incirlik and also Kurecik," Erdogan told broadcaster A Haber, referring to two military bases used by the United States. "If the threat of sanctions is implemented against us, we'll respond to them in the framework of reciprocity."

Incirlik is an air base in southern Turkey that has played a major role in US military operations in the Middle East and Afghanistan, and more recently against the "Islamic State" (IS) group in Syria and Iraq. The US military also stores around 50 B-61 gravity nuclear bombs at the base.

Read more: Should the US remove its nuclear bombs from Turkey?

Earlier this week, Turkish Foreign Minister Mevlut Cavusoglu also brought up the issue of closing the two bases to the US if Washington imposes sanctions.

'Both sides have a lot to lose'

Despite the threats and concerns about US nuclear weapons stored at Incirlik, analysts are skeptical about whether Turkey would actually act against Washington.

"I can't imagine that Erdogan would follow through. Ankara would be putting its NATO membership at risk and create tensions that would damage the alliance," Ulrich Kühn from the Institute for Peace Research and Security Policy at the University of Hamburg told DW.

"This threat comes across more as a domestic political maneuvre," he said.

Sanctions on the horizon

US lawmakers on both sides of the aisle have been pressing US President Donald Trump to impose sanctions on Turkey over its purchase and deployment of Russia's S-400 missile defense system, which Washington says is incompatible with NATO and threatens F-35 fighter jets. In response, the US began kicking Turkey out of the F-35 fighter jet program, in which Ankara was a partner.

The Trump administration has so far refrained from imposing sanctions on NATO ally Turkey over the S-400 purchase.

Under a US law known as the Countering America's Adversaries Through Sanctions Act (CAATSA), states that buy certain military hardware from Russia must be sanctioned.

Relations between the two NATO allies have also been strained over Turkey's military incursion in northeast Syria against Kurdish forces that partnered with the US against IS. After the US military withdrew from the Turkish-Syrian border, Turkey struck a deal with Russian President Vladimir Putin to patrol northern Syria.

Turkey considers the Syrian Kurdish YPG militia to be a terrorist group with links to Kurdish rebels fighting a 35-year insurgency against the Turkish state.

Erdogan on Sunday also threatened to retaliate against the US after the Senate and House voted to recognize the 1915 killing of Armenians as genocide. Trump has not signed the resolution.

Recep Tayyip Erdogan will meet Donald Trump at the White House at a time of historic differences between the two NATO allies. Photo-ops and pomp won't fix a host of issues that have damaged relations. (13.11.2019)

First components of Russian-made S-400 missile system have arrived in Ankara, Turkish officials said. The US had threatened sanctions, sparking a row within NATO, of which Turkey is a member. (12.07.2019)