Syrian President Bashar Assad says his government's ultimate goal is to restore state authority over Kurdish controlled areas in northeastern Syria. He also said he did not want to make Turkey an "enemy." 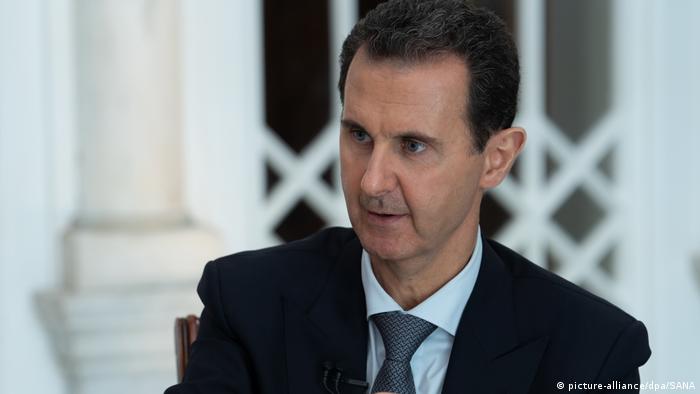 Syrian President Bashar Assad said on Thursday that his government's ultimate goal was to restore state authority over Kurdish controlled areas in northeast Syria. But the process would be "gradual" and would "respect new realities on the ground," Assad said in a state television interview.

Earlier this month, US President Donald Trump ordered US troops withdraw from the region, making way for a Turkish military offensive there. Ankara views the Syrian Kurdish fighters as an extension of the decadeslong Kurdish insurgency in southeastern Turkey.

Turkey last week struck a deal with Russia to halt its weekslong operation.

The agreement calls for the withdrawal of Syrian Kurdish fighters from areas along Turkey's border with Syria, with a view to setting up a "safe zone" where Ankara plans to repatriate some of the 3.6 million Syrian refugees it currently hosts.

Joint Turkish-Russian patrols are due to start in areas near the Syrian border on Friday after the Kremlin said that Syrian Kurdish fighters had withdrawn in accordance with the terms of the deal.

Don't want Turkey as an 'enemy'

On Thursday, Assad said the Russian-Turkish deal is "temporary."

"We have to distinguish between ultimate or strategic goals ... and tactical approaches," he said, stressing that his forces will eventually reclaim territory taken by Ankara in its latest offensive.

With the deal, he said, Moscow has managed to rein in Turkish aspirations to seize more Syrian lands and outmaneuvered Washington.

The Syrian president stressed he didn't want Turkey as an "enemy." But he said Turkish President Recep Tayyip Erdogan himself was an "enemy" due to policies hostile to Syria. Turkey supports Syrian rebel forces who have battled Assad's government during the eight-year-long war that has killed more than 370,000 people.

Read more: Will Syria get a new constitution?

Syrian government troops pulled out of the country's northeast in 2012, leaving it to Kurdish groups to administer. Kurdish-led forces had then allied with US forces to fight "Islamic State" militants — and set up a self-administration that controls nearly a third of Syria, including the country's largest oil and gas resources.

The Kurds would not be asked to immediately hand over their weapons when the Syrian army enters their areas in a final deal with them that brings back state control to the region they now control, Assad said.

"There are armed groups that we cannot expect they would hand over weapons immediately but the final goal is to return to the previous situation, which is the complete control of the state," he said.

A day earlier, the Syrian government called on the Kurdish groups to join the official military. But the Syrian Democratic Forces (SDF), the de facto army of the Kurdish administration in northeastern Syria, turned down the proposal.

It said "a unity of ranks must proceed from a political settlement that recognizes and preserves the SDF's special status and structure." Such a move would also require "a sound mechanism to restructure the Syrian military establishment," SDF said in a statement.