Boeing has seen a sharp fall in deliveries as its bestselling MAX jets remain grounded following two fatal crashes. It's not the first time the US plane maker has lost the crown to its European rival. 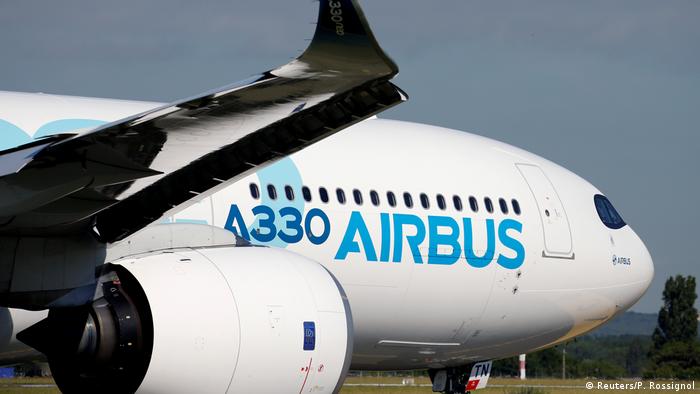 Europe's Airbus has become the world's biggest plane maker this year as its US rival Boeing struggles to get its bestselling MAX jets back in the skies.

Airbus — which has trailed Boeing since 2012 — delivered a record 863 aircraft in 2019, Reuters news agency reported, citing airport and tracking sources. Boeing, on the other hand, had delivered just 345 planes by the end of November and is on course for its worst performance in more than a decade, mainly hurt by the grounding of the MAX aircraft.

The US plane maker delivered 806 aircraft in 2018, slightly more than its European rival's tally of 800.

Boeing's 737 MAX jets have remained grounded since March last year following a fatal crash of the plane in Ethiopia that killed 157 people. The tragedy took place less than five months after another MAX crashed in the Java Sea off the Indonesian coast, killing 189 people. The grounding has cost the plane maker more than $9 billion (€8 billion) so far.

Boeing, which is also facing several compensation claims from victims' families and airlines hit by the grounding, has reported just 30 new orders for its MAX planes since the crash in Ethiopia. The plane maker said last month it would suspend production of the beleaguered aircraft in January amid concerns that the grounding would last well into this year.

The single-aisle 737 MAX, first delivered in May 2017, has been Boeing's bestselling plane ever, with more than 350 planes registered and about 5,000 on order. The MAX program is critical to the company. It represents nearly 80% of Boeing's commercial aircraft order backlog and nearly 60% by value.

Boeing and Airbus have been involved in a fierce competition over the past decade to win orders for new jets and occupy the top spot in the jetliner industry. The two are also part of a 15-year-old World Trade Organization dispute, blaming each other of being unfairly subsidized by their governments.

Airbus reigned as the world' biggest plane maker for a decade till 2012 when Boeing regained the top spot after delivering more jets.

Boeing launched its 737 MAX planes in response to Airbus' fuel-efficient, single-aisle A320 Neo jets which became an instant success among airlines. The two rivals have combined orders in excess of 11,500 for the two jets, underscoring airlines' preference for fuel-efficient jets.

Airbus had initially planned to set a new industry record by shipping up to 890 planes this year. In October, it trimmed its forecast to 860 deliveries, citing its production issues. Boeing had planned to deliver more than 900 aircraft but was forced to suspend its delivery forecast following the MAX groundings.

Airbus is also poised to comfortably win the annual order battle with its US rival. The European plane maker logged 718 net orders between January and November last year compared with Boeing's negative total of 84. Boeing saw more cancellations than orders during that period.

Boeing's order book does not yet include a letter of intent for 200 MAX planes announced by British Airways owner IAG at the Paris air show in June.

Boeing, however, continues to lead Airbus in deliveries of wide-body, larger planes such as Boeing's 787 Dreamliner and Airbus' A350, which enjoy bigger profit margins. Boeing delivered 224 wide-body planes compared with Airbus' 147.

The Indonesian flag carrier is the first airline to publicly confirm plans to cancel an order for the model involved in two fatal crashes. The move could spark more cancellations from other major carriers. (22.03.2019)