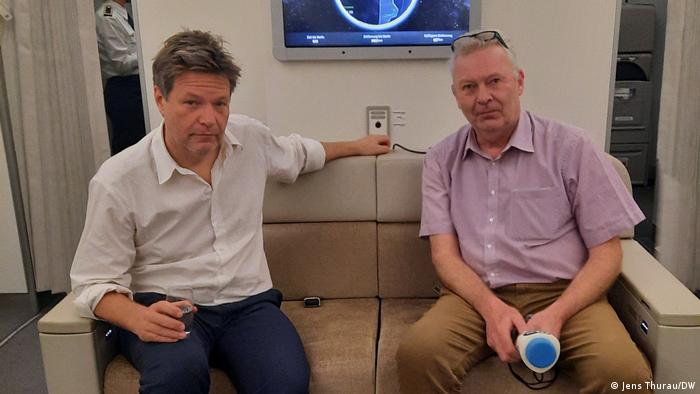 For three days, German Economy Minister Robert Habeck traveled around the Arab world while a war raged in Europe. The Green Party politician described this as hardly bearable.

In Qatar and the United Arab Emirates (UAE), the aim was to make new gas deals as quickly as possible and to cooperate on the production of green hydrogen. DW correspondent Jens Thurau spoke with the German vice-chancellor on the return flight to Berlin.

DW: Mr. Habeck, the reason for your trip, which was planned at very short notice, was the shock that followed Russia's attack on Ukraine and the realization that something had to be done immediately about Germany's energy dependence on Russia. Were you successful?

Robert Habeck: That will only become clear in the coming weeks and months. After all, I don't make contracts, but I can open the framework for talks between companies. There is a longer energy partnership with the United Arab Emirates, which relates primarily to climate neutrality, green hydrogen, and the expansion of renewable energies.

We have now signed a total of five cooperation agreements. So that was clearly successful. In Qatar, it was primarily about the possible supply volumes of liquefied gas. I am at least confident that the visit has led to something. Qatar is a company and a state at the same time, and I now have a bit of a feel for where they stand. So this can work. Our companies will now enter into talks.

Habeck: 'We simply don't have any time to lose'

German Chancellor Olaf Scholz spoke of a turning point after Russia's invasion attack. In Europe, almost everyone is under the impression that the conditions for politics are being completely realigned. Is it the same in the Gulf states?

It was clear to all the interlocutors that Germany now wants to take tough action against Russia. That we will not put the Nord Stream 2 gas pipeline into operation and we will still focus on climate protection.

But, while we say that more needs to be done for workers' rights in Qatar and we criticize the Emirates for welcoming the Syrian strongman Assad, which I also did on this trip, these countries' view of Germany and the West is: "You leave us hanging when armies that we see as terrorists fire on us. Your attitude toward Iran is ambivalent, and we have to pay the price. And you only ever come when you want us to help you." I was told that very bluntly.

The question they asked us was: Is this what you want long term? Or are we only supposed to help for a short time and then you turn your backs on us again? So I had to explain that our need for green hydrogen is long-term and the policy of turning away from Russian gas is a permanent project. And I think we succeeded in that.

For me, personally, this is not a completely new approach to politics. I've always wanted to bear responsibility and knew that I'd have to make decisions that weren't popular, that were difficult, that demanded something of people. Decisions that may not be acceptable to the majority and that have to be made anyway.

But, of course, I didn't realize that I had to make decisions against a background of war. Now everything is even more focused, even more serious. The decisions to supply weapons to Ukraine, to equip the Bundeswehr, the sanctions. And we don't know when President Putin will take countermeasures. I mean, Russia has nuclear weapons! Everything is serious — that has changed. Nothing is simple anymore. But that we can just sail through things was never my expectation either.

This interview was conducted in German.