Hundreds of migrants seeking entry to the US have blocked a bridge along the border with Mexico to protest delays in the asylum process. Tens of thousands of Central American migrants are currently stuck in Mexico. 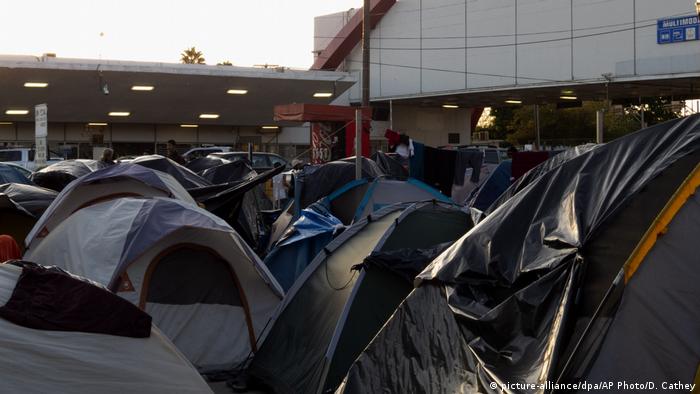 Roughly 400 mainly Central American migrants blocked the Gateway International Bridge, which spans the Rio Grande River between Matamoros, Mexico, and Brownsville, Texas, on Thursday. The men, women and children say they are frustrated by the delays and uncertainty they face in awaiting asylum processing in the United States.

One of those taking part in the demonstration told the Spanish-language US television channel Telemundo, "This is a peaceful protest, we don't want any violence."

Trapped between the cartels and razor wire

In January, the US enacted a policy known as Migrant Protection Protocols (MPP), which sent migrants back to Mexico to await asylum processing. That process can take months, if not years.

More than 51,000 individuals have been sent back to Mexico under MPP, with at least 800 being sent to Matamoros, a city infamous for gang violence and cartel-controlled human trafficking.

Tens of thousands waiting to get into the US

In July, the Associated Press news agency reported that some 19,000 asylum seekers had registered on waiting lists in Matamoros and three other cities along the border. They have been forced to wait there for weeks and months — sleeping in tents and on the streets — due to the backlog created by a US policy known as metering, in which the US only allows a handful of people to cross the border each day.

Many of those seeking asylum in the US are not from Mexico, but rather from crisis-ridden Central American countries such as El Salvador, Guatemala and Honduras.

In September, the US Supreme Court upheld a policy put forth by the Trump administration, allowing it to deny asylum to anyone who passes through a third country en route to the US without requesting asylum in that country.

The decision therefore affects almost everyone arriving at the US' southern border.