Germans are often seen as hard-working, efficient people. But are they happy at work? Not according to an international study by the Gallup Organization, which says most Germans feel disengaged from their jobs. 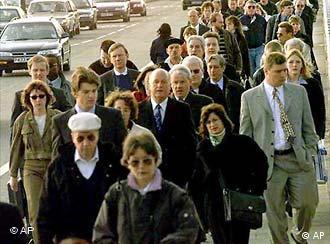 Not many smiling faces at the start of another day at the office.

Those wondering why the German economy is in the doldrums could find part of the reason in the results of the Gallup study.

The American-based organization said this week that only 12 percent of Germans have a strong emotional attachment to their jobs and their workplace; 70 percent say they're just going through the motions, and 18 percent have, psychologically at least, already quit.

The results are part of a 30-year international study on emotional attachment to work as a measure of job satisfaction and productivity. The German branch of the Gallup market research and consulting group interviewed around 2,000 working Germans in the summer of last year. The organization also carried out studies worldwide.

Americans lead the way in job satisfaction, with 30 percent of U.S. respondents saying they feel a strong attachment to their jobs. Other leading nations were Canada (24 percent), Israel (20), Australia (18), and Great Britain (17). Nations with fewer people expressing job satisfaction than Germany include Japan, where only 9 percent said they liked their job, France (6) and Singapore (4).

The majority of people who are unhappy in their jobs don't do anything to change their situation. According to Gerald Wood, executive director of Gallup Germany, most stay with their companies --something that has detrimental consequences for their employers.

“The level of emotional attachment to the jobs has a direct correlation to productivity, customer satisfaction, lost workdays, lower turnover -- key economic factors directly linked to the state of mind, " he told Deutsche Welle. "So basically by having a workforce that is less productive, you end up with lesser profitability.”

Wood estimates the value of lost productivity caused by job dissatisfaction in Germany at around €240 billion per year. It's often not the actual work that puts employees off, rather the personal interaction with their colleagues, and especially, their supervisors.

“What we have found is that the relationship with the direct managers is very important," Wood said. "That is where emotional attachment either happens or doesn’t happen. So you could be very happy to work for BMW for example as a company, but if you are very unsatisfied with your direct workplace then you are more likely to quit that job.”

So what, if anything, can German companies do to make their workforce happier? While it's difficult to change the chemistry between staff members, Wood encourages German managers to become more liberal with praise for their staff, and start listening more to employees' opinions -- things that have little to do with how well colleagues like each other, but which can greatly improve the office atmosphere.

Additionally, German companies can take a cue from countries with higher percentages of satisfied workers, and do away with unnecessary corporate hierarchy.

“If you look at countries where hierarchies play a large role, for example in Germany, France, Singapore and Japan, you see engagement dropping. So what the US has done is to flatten hierarchies and also the whole communications culture within corporations -- the structures in the US are much different than what we find here in Germany,” Wood said.

German Chancellor Gerhard Schröder in his annual New Year’s speech called on Germans to do their part in bringing the country’s ailing economy back on track. (Dec.31, 2003)

Companies in Germany must shell out as much as an additional 81 cents in benefits and insurance costs against each euro they pay in wages to employees. Critics say this is hurting an already depressed labor market. (Apr.24, 2003)