Will the coronavirus crisis finally spell the end of cash payments in Germany? | Business | Economy and finance news from a German perspective | DW | 07.05.2020 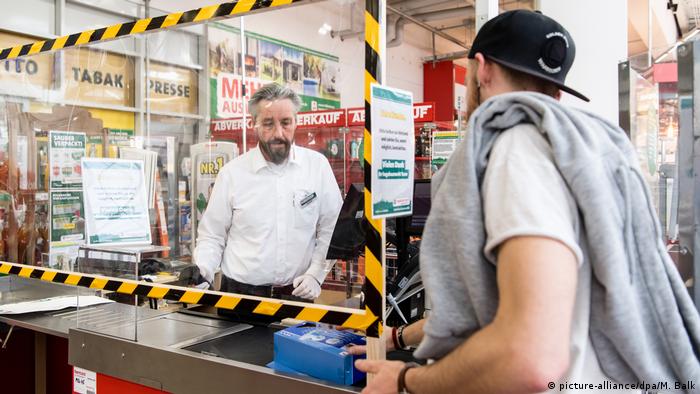 Germany may have gotten rid of its kaiser long ago, but the country still has a king: cash. An outlier among rich countries, Germans are famously shy about paying with cards, let alone swiping a smartphone at the checkout line. German shops and restaurants are equally famous for not wanting to accept card payments.

But now with social distancing rules and the fear of spreading COVID-19, signs are popping up in restaurants and shops asking customers to pay electronically — if possible with a contactless card — to avoid close contact while exchanging cash.

Add to this the people ordering and paying online for household items and take-away food during coronavirus lockdowns and a revolution is underway. Germans, it seems, may finally be pushed into the age of electronic payments whether they want it or not. Soon cash may no longer be king.

It is not just businesses that are concerned. A lot of shoppers are also less willing to handle cash, despite the fact that the highly used €5 and €10 notes are replaced often. The Bundesbank, the country's central bank, has confirmed that cash does not present a high risk of spreading the virus. Nonetheless, there is a general sense of unease around coins and bills. 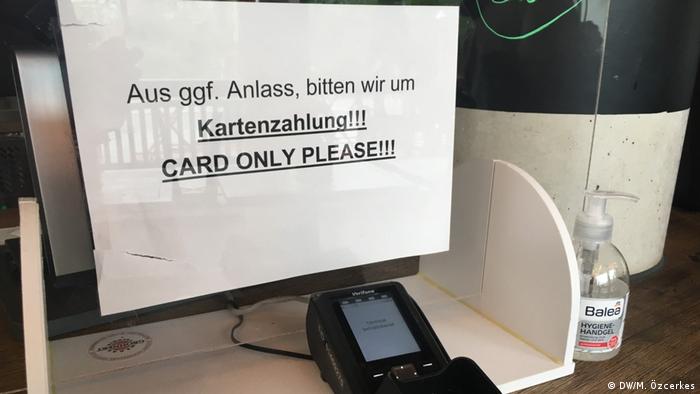 A sign at a Berlin cafe asking customers to pay with a card and not cash (!!!)

For many this focus on cash is not in line with science. "Every item on a shelf from ham and pasta to melons or a bottle of beer is handled more frequently and by a multitude of different people than cash," Wilfried Fuhrmann, a monetary expert at Potsdam University, told DW. He sees the current situation being exploited by those seeking to get rid of cash.

Others are more reserved, but see the same trend. Gunther Schnabl, an economist at Leipzig University, says the current crisis is just another in a long line of steps to abolish cash. "Either directly because no more cash is issued — the €500 note is no longer being printed and the European Commission is considering abolishing small coins! — Or indirectly, by devaluing cash through inflation."

Who's going to pay?

For the time being there are still millions of euro banknotes and billions of euro coins in circulation and Germany has around 58,000 cash machines. Yet handing all that cash is a complex and expensive process. It has to be printed or minted, counted, stored and transported to banks and ATM machines. Then it has to be re-sorted, recounted, brought back to banks and eventually replaced. Worldwide the costs for this have been estimated at 0.5% of global GDP.

In the end it is not just central banks who pay, but retail banks. After years of low or no interest and charging more fees, banks are looking to cut costs. One solution would be to get rid of their cash headache.

Financial institutions even more than retailers are specially placed to exert pressure on customers by making access to cash easy or hard.

They can adjust ATM fees up or down, reduce the number of ATMs or simply refill them less often to make cash less attractive. Right now there are lines at some ATMs and a number of them are not being replenished in time, since "banks don't make a profit by guaranteeing the supply of cash — and hinder them more than they promote them or guarantee them," said Fuhrmann.

Besides using cash machines to change behavior, banks could also lower or get rid of high annual credit card fees for card holders. So far they have been hesitant to act on a wide scale.

Since the introduction of the euro, the amount of cash in circulation has continually increased, with a big jump since the start of the coronavirus crisis, according to Schnabl. Despite lines at some cash dispensers, he sees this latest jump as a lack of trust in the system.

"Confidence in the monetary and financial system may have continued to deteriorate, so that the demand for cash is likely to increase in order to store savings under a pillow at home," he told DW.

In other words, even while paying electronically Germans are keeping cash close by as a safety net in uncertain times. Based on a survey of household behavior, the Bundesbank, reported that in 2017 cash was used in 74% of all transactions in Germany, especially for amounts under €50 ($54).

What was more interesting was that cash payments accounted for just under 48% of transactions by value. It was the first time that cash took a backseat to other payment methods. 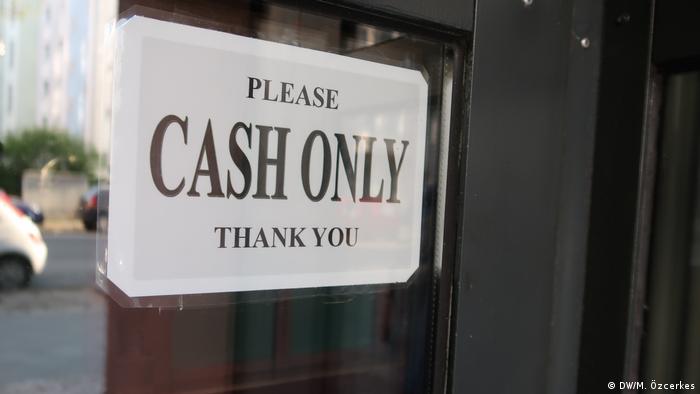 More recent numbers show more change. Today 41% of Germans use their debit cards more often than before the coronavirus pandemic started, according to a survey for IDZ (Initiative Deutsche Zahlungssysteme), a payment industry organization. Add in credit cards and 57% of Germans across the board say they use their cards more than in the past.

Ingo Limburg, head of IDZ, thinks that this is only the beginning. "We assume that the trend toward card payments will increase disproportionately," he told DW.

To make this transition easier banks are issuing more cards with contactless functions and have increased the limit for contactless payments from €25 to €50 without the need to enter a PIN. Now it is up to stores to reprogram their machines to make this happen on their end.

Hiding behind the numbers

However, no matter how convenient and easy card payments are becoming many Germans are reluctant to give up cash. Protecting privacy is usually the first argument brought up. Cash is anonymous and hard to track.

"Cash is a piece of freedom that, like other economic freedoms, is more at risk than ever. The government will be even better informed about the payments and assets of its citizens," said Gunther Schnabl.

"We are particularly skeptical about the data protection policies of the major US players. Data from payment transactions may not be used for other purposes such as marketing or creating profiles. Payment service users must have sovereignty over this sensitive data," said Limburg.

Besides Big Brother worries, there are other problems with going digital like identity theft, cyber attacks, power outages or tech problems. Additionally, older people, the poor, those without bank access and those who are simply offline will be left out.Moreover in times of crisis, people like things they can trust. Things they can hold.

It will be an uphill battle to convince more Germans to permanently switch to paying electronically. But practice makes perfect. Once shoppers overcome the hurdles and see how easy paying with a card or even a smartphone is, they may be less likely to go back to wallets full of cash. Slowly but surely all the signs are pointing in one direction.