Opinion: With no Plan B, Merkel remains steadfast on refugee policy

Many Germans say Angela Merkel’s refugee policy is a failure. But the chancellor is defending her position. And the last word has not yet been spoken, says DW’s Barbara Wesel. 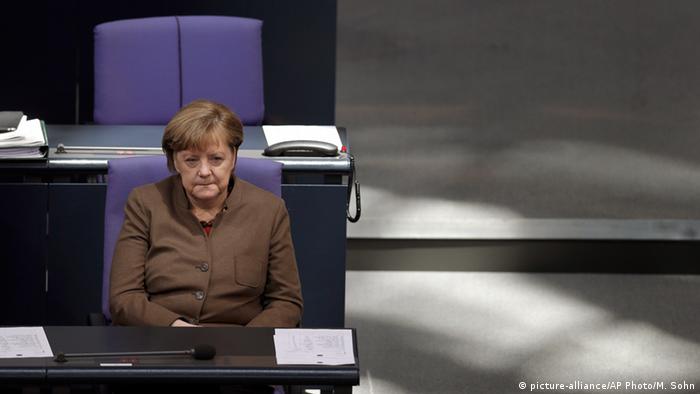 Angela Merkel sat down with German journalist Anne Will on Sunday evening and fought. She fought for her refugee policy because she is convinced that she is doing what is logical, and what is right. She fought for the German political center, for the cohesion of the European Union, and for sense to outweigh hysteria. And, of course, she fought for her office and her political legacy. Merkel, who normally comes off so reserved, seemed almost passionate - and that shows just how serious she is about defending her position in the face of criticism from her own party, from the right wing and from parts of the media.

Merkel defended her decision not to introduce an arbitrary upper limit on the number of asylum seekers Germany will accept, like the Austrian government has done. And she says she won't simply close Germany's borders to cut off the flow of migrants, increasing the burden on neighboring countries. Instead, she said clearly that now is the time to help Greece, which is facing a humanitarian crisis.

The chancellor also refuses to give up on the possibility that a European deal on the refugee crisis can still be reached - perhaps the most difficult part of the challenge facing her right now. "The right thing is for Europe to stick together, and to show compassion," she said. Angela Merkel is the only leader doing so at the moment. The other heads of state either don't know the meaning of the word, or - like Hungary's Victor Orban and his new best Bavarian buddy, Horst Seehofer - are being driven by fear, causing them to overtake right-wing populists, like François Hollande in France had done, or now governing coalition in Vienna.

For this sentence alone, and for her steadfastness in general, Angela Merkel deserves the Nobel Peace Prize, sainthood, as well as the prayers of Baden-Württemberg's Green state premier, Winfreid Kretschmann. In all seriousness, we should be glad that she refuses to be led astray.

Practically speaking, the chancellor is making her life much more difficult. The attempt to work with Turkey on curbing the number of migrants smacks of desperation and may not even succeed. Within the EU, national egoism has erupted with such force that it could well threaten the future of the union. And no, that is not the fault of the German chancellor. She is not dividing Europe. Rather, Europe is made up of too many weak governments who don't have the courage of their convictions. If Merkel were to act the same way, Europe would have nothing to show but the grotesque face of populism. Too many politicians are willing to betray its founding principles to gain political capital.

The biggest problem when it comes to Europe's refugee policy is its inability to deal properly with immigration. If a country like Turkey can accept 2.5 million Syrian refugees without any huge problems, then the EU with its half a billion citizens should easily be able to take in a similar number. But instead of looking for a common, practical solution, refugee policy has become the victim of populists and demagogues. From theories about national purity, to rising fears about the Islamization of Europe, to plain old social envy, it's all there.

Angela Merkel is the last line of defense when it comes to this hysteria, which is often supported in the media. She hasn't given up the idea of Europe as a political union driven by reason. It may be that she loses this fight, because too many of her European colleagues are unable to make a sober assessment of the dangers for the EU, and are acting instead in their short-term interests. It may be that Merkel is forced to compromise and alter her course after the EU-Turkey summit on March 7. But at least she will have fought for her convictions and done everything she could to keep Europe together, and create a humane refugee policy. "This is a very important phase in our history," she said. She's right, but unfortunately, this is something that many people have failed to grasp.

In an interview, Chancellor Angela Merkel called for patience with efforts to accommodate refugees. Merkel said she was not weighing an alternative to her approach toward reducing the number of asylum applicants. (29.02.2016)

Moroccan officials have agreed to take back their citizens deported from Germany. The deal comes as the German government faces increasing domestic pressure over the refugee crisis. (29.02.2016)

Police used tear gas to disperse dozens of migrants who lined up to prevent them pulling down the makeshift camp. Hundreds of tents and temporary shelters were torn down. (29.02.2016)

Opinion: Mariupol — a symbol of Ukrainian courage and Russian shame 16h ago