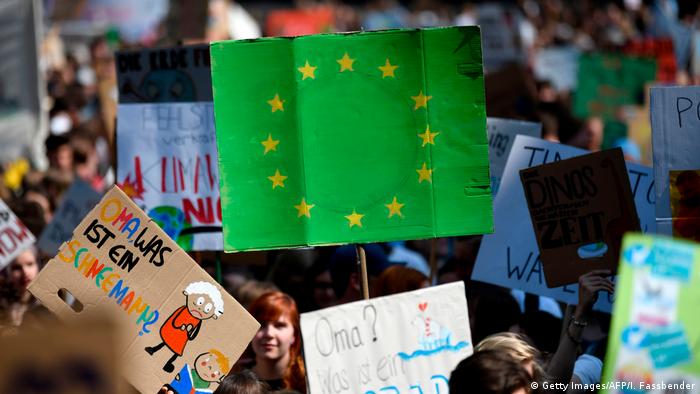 For a sluggish bureaucracy, the new year kicks off with a new European Commission president, new top European Union personnel and a new European Parliament. The main focus of debate is already clear for them: a Green Deal, to transform the EU into a climate-neutral and more innovative economic bloc. European Commission President Ursula von der Leyen intends to prioritize that popular issue over other policy areas. Whatever mirrors Greta Thunberg the EU is well advised to consider, goes top EU thinking, because it speaks to and attracts young people. In addition to saving the planet, it could give a makeover to a tired-looking EU.

French President Emmanuel Macron will keep pushing buttons. At home, he's up against major resistance, making it all the more necessary for him to prove his dynamism in EU reform. That said, his desire for a "sovereign Europe that protects" isn't necessarily shared by other members.

France's natural partner, Germany under Chancellor Angela Merkel, is lacking that dynamism more than anywhere. In 2020, she has the chance — and the responsibility — to deliver the EU another political masterstroke. Germany will take up the rotating presidency of the Council of the European Union during the second half of the year, when the next budgetary period will be debated among Merkel's 26 colleagues. The seven-year budget tops more than €1 trillion ($1.11 trillion). Merkel, representing the EU's largest net contributor, was decisive during the previous two budget rounds.

The hurdles are higher this time around. Differences loom between the EU's east, west, north and south. Can Merkel use financial pressure to get Poland and Hungary to return to the rule of law? Rumors at home of Merkel's coalition government collapsing notwithstanding, the hope and expectation in Brussels is that the long-time chancellor stays on to deliver at the European level.

The EU is carrying its 2019 problems into the new year. The terrible images of refugee camps in Greece and the Balkans are supposed to have quickly forged a common solution to migration, but in reality the respective positions are miles apart from one another. Many member states, and not just the loudest ones like Hungary, Poland and Austria, do not want more migrants.

Rule of law and reform hopes

The political conflict with Hungary and Poland, and recently Malta too, over rule of law remains open. Article 7 proceedings do, too, although other member states have little appetite to further sour the mood in the (above-mentioned) budget negotiations.

The EU is still expressing its interest in the accession of Western Balkan states even if a French-led veto blocked it. Will 2020 usher in any softening of that position or fresh perspectives? That can only happen if Macron gets his way and the accession process gets reformed. And that can only happen if member governments feel they are safe from the absurd demands of respective national right-wing populists. So far, it doesn't look that way: In Spain, Belgium and Austria, the process of government building is being haunted by the populists' presence; Italy's anti-right coalition is in a very fragile position, which can topple at any time.

Against this backdrop is the "Conference on the Future of Europe," which is supposed to translate reform wishes into concrete reform action. The conference is to take two years to casually reflect, only to surmise that what's missing is the political will to implement the goals already discussed. It's a similar outcome to 18 years ago, when the EU constitution was put forward in 2002 only for it to fail by referendum. A slimmed down Lisbon Treaty replaced it five years later.

And here we go again in 2020. Why? Are there really so many new ideas, other than Macron's? Hopefully! Otherwise the long conference is just a waste of time and money with a likely big carbon footprint — something the Green Deal foresees calculating into such EU gatherings as of 2020.