Holiday train travel is at a near standstill in France as nationwide public sector strikes enter their third week. From the Paris metro to high-speed long-distance trains, rail services will mostly not be running. 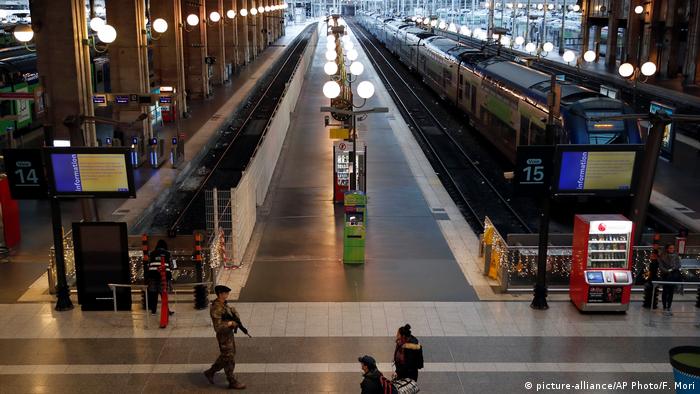 On Tuesday, France's national rail carrier, SNCF, announced that domestic and cross-border routes would run with extremely reduced service over the Christmas holiday period as strikes by public sector workers enter their third week. French President Emmanuel Macron had asked workers for a holiday pause to their strikes against his proposed changes to their pension system and increased retirement age.

"Due to a nationwide strike affecting multiple industries, SNCF traffic is likely to be severely disrupted across the entire network," an announcement on the carrier's website reads. "We urge all passengers to postpone their journey." The announcement was last updated December 5, but the information remains current.

Over the weekend, SNCF carried more than 800,000 passengers to destinations across France and over the borders. On Tuesday, Christmas Eve, only 40% of the scheduled high-speed TGV services and 20% of local trains were running. Two out of every three headed to Germany were canceled.

The changes to the retirement system for public sector workers was a central pledge of Macron's. The president has argued for a unified pension system to replace the 42 separate public sector systems currently in place. Macron said the system had become too complicated, proposing various cuts and an increase of the retirement age from 62 years old to 64. The SNCF reports losses of about €400 million ($440 million) in revenue during the strike period so far.

Fifty-one percent of French people support the strikes, according to a poll by Ifop released Sunday; just 34% are opposed. Negotiations fell apart earlier in December, and, despite the government's appeals for a holiday hold, Laurent Brun, the general secretary of the CGT rail workers' union told the communist newspaper L'Humanite that he saw "no reason" for a pause. On Monday, Prime Minister Edouard Philippe said negotiations would resume on January 7.

Various other factors could affect travel during the holiday period. The Ajaccio airport on the Mediterranean island of Corsica is flooded, shifting flights to Bastia in the north.

Petrol stations report that fuel supplies remain adequate despite strikes by refinery workers. Only two metro lines — the automated ones — are currently running in Paris, and regional trains around the capital are not.

Separately, the Autonomous Union for Interns of the Hospitals of Marseille has also called a strike. Hospitals remain open because they are by law required to maintain a minimum level of service, but without a robust staff of doctors-in-training, the senior doctors who continue to work report being overwhelmed and exhausted.