France strikes as Macron pushes ahead with pension reforms

Five days of mass strikes by French unions have crippled transportation across the country. But the government of President Emmanuel Macron appears determined to push through its plans for a pensions overhaul. 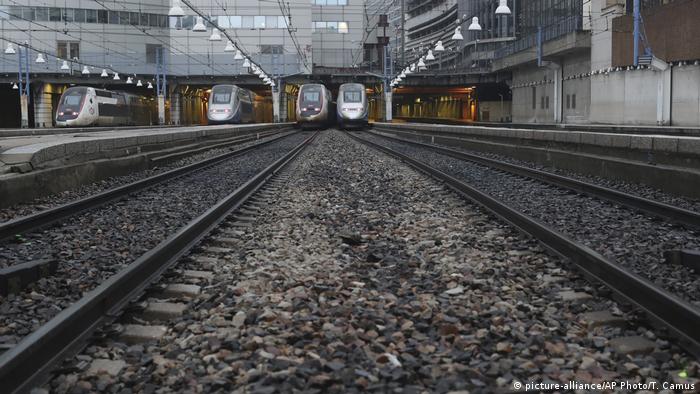 France grappled with a fifth day of mass strikes on Monday, with public sector workers like train drivers, teachers and hospital employees staying away from work to protest against the government's proposed pension reforms.

In Paris, train, bus and metro services faced severe disruption and monster tail backs clogged the roads as people drove to work instead. Fourteen of the city's 16 metro lines were shut down completely, with only the two fully automated lines running as normal. More than 600 kilometers (370 miles) of gridlock were reported in the Paris region early on Monday, twice the normal level according to the Sytadin traffic website.

The road traffic was worse on Monday than when the strike started last week, because many French employees managed to work from home or take a day off then. But that's increasingly difficult as the strike continues.

Only about a sixth of French trains were running on Monday and international train lines also saw disruptions, including routes into Germany. Citing safety risks, rail operator SNCF warned travelers to stay home or use "alternative means of locomotion" to get around Monday, instead of thronging platforms in hopes of getting the few available trains running.

The strikes are taking place in response to President Emmanuel Macron's plan to streamline France's pension system by introducing a single, points-based pension scheme for workers in all economic sectors.

Prime Minister Edouard Philippe will on Wednesday present the details of how the government intends to redesign the French pension system.

The reform is central to Macron's vision of transforming the French economy. The week ahead will test the French president's ability to deliver the social and economic change he says is necessary for France to compete with powers like China and the United States.

Unions are planning new protests on Tuesday and hope to keep up the pressure on Macron's government to back down on the retirement reform. Teachers in particular are expected to walk out again, raising the prospect of widespread school closures. Firefighters, electricity workers and "yellow vest" anti-government demonstrators have also joined railway workers in the streets in recent days.

Who emerges victor will in part depend on the battle for public opinion. Opinion polls ahead of the strikes showed the public was relatively evenly split. On the metro on Monday, there was both sympathy and irritation towards the strikers.

"I don't understand. It's not the right way to do things, for [metro operator] RATP to block people like this," said commuter Charles Ramm. "It will turn against the unions."

Accountant Lamia Massoudi said she backed the strike, even if meant inconveniences. "I'm with them," Massoudi said.