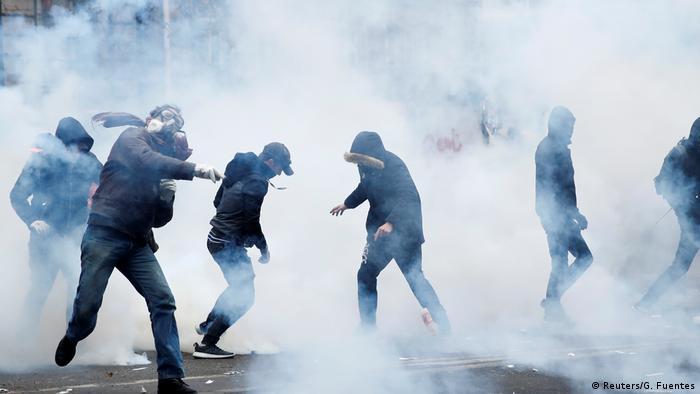 France's largest shutdown in decades turned violent on Thursday after protesters in Paris and the western city of Nantes smashed windows and torched cars and riot police charged crowds and used tear gas in response.

A general strike has paralyzed the country as workers and other professionals protest against President  Emmanuel Macron's proposed pension reforms.

The Eiffel Tower and other businesses in Paris closed down and security authorities formed a barricade around the presidential palace. Authorities also deployed over 6,000 police officers to control protests and marches.

Over 800,000 people took part in demonstrations around the country, 65,000 of them in the capital, a union organizer reported. Police detained at least 90 people in Paris on Thursday.

Yves Veyrier, head of the Force Ouvriere union, said it has been a long time since they've seen such a large turnout.

"We now expect the government to take the measure of this mobilization, and understand that its universal system is a bad idea," he said.

While clashes between small groups of violent protesters and riot police broke out around the country, the walkout was largely peaceful.

The strikes follow over a year of weekly "yellow vest" protests against inequality that have rocked the country. 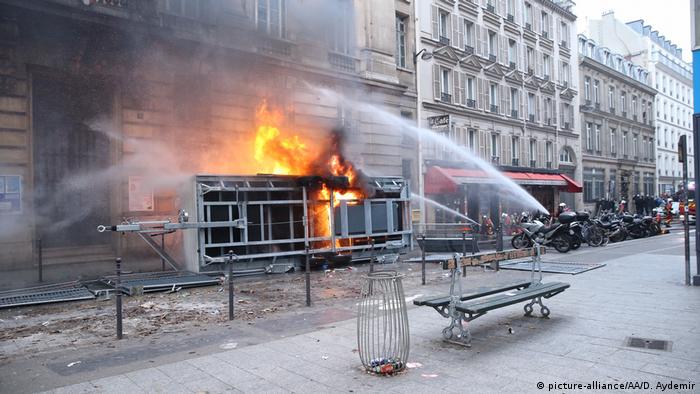 What services are affected?

The French government has beefed up security in the capital and other major cities amid fears hardline protesters could cause trouble.

French media said the walkout could last for several days, drawing comparisons with the 1995 showdown between the government and unions that paralyzed the country for weeks.

Rail workers have already voted to extend their strike through Friday. Unions for the bus and metro operator in Paris said they will continue striking until Monday. About 90% of high-speed trains and 70% of regional trains have been canceled for Friday.

The delays prompted many people to take the day off work, while others rode their bikes or used ride-sharing services. Some services even offered special promotions related to the strike.

"The moment of truth for Macron," wrote the daily Le Monde in its Thursday edition. "The next days are a decisive test for the head of state."

The French leader wants to set the tone for the second half of his term, as he plans to announce more difficult reforms in the coming months.

"What we've got to do is shut the economy down," Christian Grolier, a senior official from the hard-left Force Ouvriere union, told Reuters news agency. "People are spoiling for a fight."

The "yellow vest" demonstrations, which occasionally turned violent, evolved into an anti-government uprising against Macron, whose policies are seen as favoring the rich.

The movement has since lost steam, going from tens of thousands of demonstrators to a few thousand.

TheMediapart website said: "Will the [Thursday] protests and strikes be strong enough to halt the march of reform? Everyone is holding their breath."