The EU has started formal proceedings against Hungary for alleged breaches of the bloc's values and the rule of law. Hungary has strongly rejected the accusations as politically motivated. 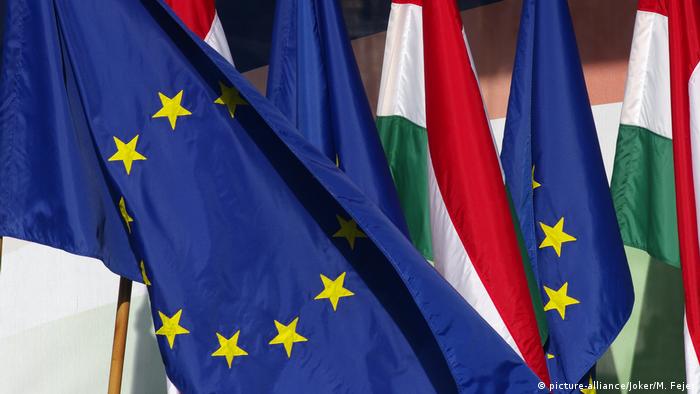 Hungary on Monday fiercely rejected accusations from the European Union that it was in breach of EU values following an initial hearing before the bloc's European affairs ministers.

The EU says it is concerned that Hungary's actions are weakening democracy in the ex-communist country, but Hungary has sought to portray the EU condemnation as "politically motivated."

"Once again, we are put on pillory for rejecting mass immigration. However, the facts are on our side. We protect Hungary!", the country's justice minister, Judit Varga, said on Twitter before the hearing, later issuing another tweet saying that Hungary was "proud" to be once more "protecting the borders of Europe" as it had done in the past.

The country's prime minister, Viktor Orban, has been one of Europe's leading voices against migration into the EU. He has described mass Muslim migration as an "invasion" and "poison."

But other EU member states say that Hungary's claims are misleading and that the country simply displays a lack of respect for fundamental values espoused by the bloc.

"The EU is like a family in many regards. And in a family there has to be a common set of rules ... otherwise it cannot work. And rule of law is a foundation of that," said Austria's EU affairs minister, Alexander Schallenberg.

"When we speak of the independence of judges, the freedom of the media, when we speak of the protection of minorities, academic freedom ... it reminds us of our identity, of our values," said Amelie de Montchalin, his French counterpart.

The so-called Article 7 investigation could lead to the suspension of Hungary's EU voting rights if all other member states agree, a move that is likely to be blocked by Poland.

Article 7 is a mechanism of the Lisbon Treaty that ensures "all EU countries respect the common values of the EU." It was envisaged as a way to mitigate and prevent member states from backsliding on EU values and the rule of law.

"It will be up to the next weeks and months for us to decide how we will move forward," said the Finnish minister, Tytti Tuppurainen, adding that the ministers were keeping their options under Article 7 sanctions alive.

Hungary's Viktor Orban has sent his clearest signal yet that his party may split with Europe's main conservative group and join an anti-immigrant, nationalist bloc led by Italy's Matteo Salvini in the EU Parliament. (03.05.2019)

The EU's executive has taken Hungary to court over the bill it passed last year making it a crime to help asylum seekers. The European Commission maintains the "Stop Soros" law is incompatible with EU law. (25.07.2019)

Inside Europe: The Brussels-Budapest divide

JUST IN — Viktor Orban's party set to remain in power in Hungary after opposition concedes defeat 03.04.2022