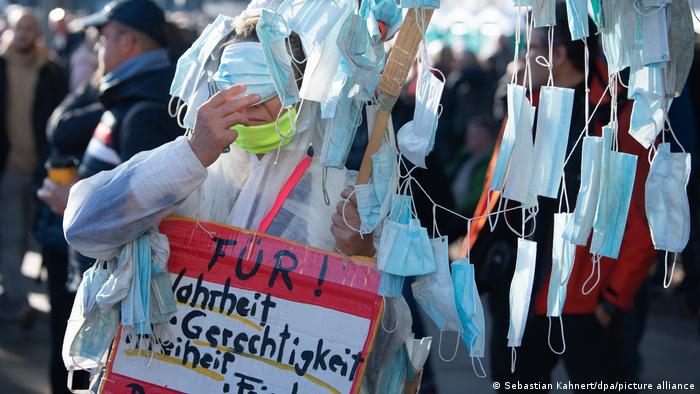 Last week, a few politicians from the right-wing populist Alternative für Deutschland (AfD) party referred to government-planned infection protection legislation as an "enabling law." A reminder: in March 1933, the Nazi-led government won the right to enact laws without the consent of the German Reichstag with that very law. The AfD was comparing regulations providing for contact restrictions to protect against a pandemic with a law that symbolized the end of parliamentary democracy and the beginning of Nazi tyranny.

Unanimously condemned by historians and political scientists as historical nonsense, the remarks, nevertheless, have motivated coronavirus deniers. Over the weekend, they took to the streets in several German cities to demonstrate against the alleged seizure of power. An 11-year-old girl in the western city of Karlsruhe compared herself to Anne Frank, a Jewish victim of the Holocaust, and a 22-year-old in the central city of Kassel compared herself to Nazi resistance fighter Sophie Scholl. Their bizarre performances were met with worldwide media interest.

It should be clear to everyone that there is a difference between being fined for possible violations of coronavirus protection decrees (and being able to take legal action against the fines) and being killed either for being Jewish or for being committed to freedom and justice. But the far-right populists and radicals who throng around the coronavirus deniers don't care. They care about something else. To them, it is all about freedom of interpretation or cultural hegemony. Oftentimes, it is more a question of emotions than of intellect.

Throughout history, elected rulers who acted as dictators, as well as members of the opposition, have used the role of victim to legitimize their own actions.

The Nazis used a — non-existing — Jewish world conspiracy to justify their extermination policy. The East German leadership called the borders it secured with walls and barbed wire, virtually imprisoning people in their own country, an "anti-fascist protective wall" — GDR citizens were made to believe there was a threat from the outside, and East Germany was merely trying to keep them safe.

Alleged powerlessness is used to exercise power. Struggling to stay in control, Belarusian President Alexander Lukashenko has resorted to a similar pattern of argumentation, as has the China-led leadership in Hong Kong.

The White House currently harbors the champion of the playing the victim, however: President Donald Trump, one of the most powerful people on the planet, uses his favorite medium Twitter on a daily basis to tell the world how unfairly he is being treated. Be it investigations concerning outstanding taxes or conceivably illegal agreements with foreign governments — he perceives a "witch hunt" everywhere. He also feels cheated out of his "overwhelming election victory."

Sounding board for populists

On a factual level, this is as ridiculous as the public performance by the 22-year-old protester who compared herself to a Nazi resistance fighter and who achieved temporary fame as "Jana from Kassel." It is not, however, a matter of truth. It is about keeping like-minded people together and legitimizing legal as well as illegal protests. Even if Trump's efforts to overturn the US presidential election using legal means fail again and again, the number of supporters who believe the 2020 election was rigged is on the rise. He has skillfully pointed the ax right at the foundation of democracy.

Germans can be thankful that the sounding board for populists is so much smaller, the reason being a much greater common understanding in society of what is true and what is false. But, if you look at the situation in the US and the history books, its naive to believe that this will continue to be the case in the future. That's why it is important to nip things in the bud and to oppose the mixing of truth and lies, of perpetrator and victim.

Anne Frank hid in the Netherlands for years, before her family was betrayed and deported to Auschwitz. The diary she wrote while in hiding has made her famous throughout the world. She died 75 years ago.

US: Biden signs off on semiconductor bill in challenge to China 2h ago