How China′s influence is changing Hong Kong protests | Asia | An in-depth look at news from across the continent | DW | 07.09.2020 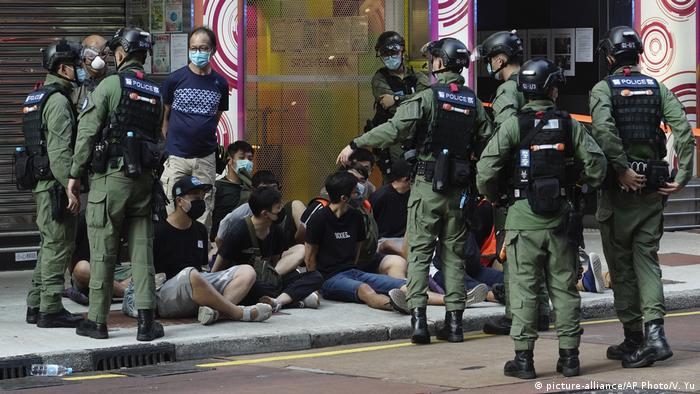 Millions of Hong Kongers were supposed to vote in legislative council elections on Sunday. But in July, Hong Kong's Chief Executive Carrie Lam delayed the elections for one year under the guise of a coronavirus public health threat.

So instead of casting ballots, hundreds of pro-democracy demonstrators took to the streets of Hong Kong on Sunday, protesting what they think is an unjustified infringement on voting rights by city leaders who are afraid of losing an election.

Thousands of riot police were stationed in the Kowloon district to counter the protesters. Isolated clashes broke out, with protesters throwing umbrellas and water bottles and police responding by firing pepper spray pellets.

Several protesters were seen being wrestled to the ground by police, including a 12-year-old girl who was reportedly shopping for school supplies with her brother. Prominent Hong Kong activist Joshua Wong shared a video of the small girl being tackled to the ground by a group of police officers in riot gear.

"In [a] police state under the national security law, you will face police brutality even though you are just going shopping," Wong wrote in the tweet.

Other protesters chanted the banned protest song: "Liberate Hong Kong, revolution of our times." One woman was arrested for chanting the slogan, as per the city's Beijing-imposed national security law.

By the end of Sunday evening, at least 289 people had been arrested, including 270 who were charged with illegal assembly.

Several prominent activists, including Leung Kwok-hung, Raphael Wong and Figo Chan, were among those detained. Activist Tam Tak-chi was arrested for "sedition in public or on social media."

"Hong Kong police will continue to fulfill their duties and swiftly arrest those who have violated the law," the government spokesperson said.

China's liaison office also condemned the demonstration on the original date of the legislative council election.

"A small group of anti-China rioters tried to incite opposition to the government's decision to postpone the legislative council election, which is an act that defied existing laws and the national will," the liaison office said in a statement.

Although this weekend's demonstrations are similar to what the city experienced last year, experts have pointed out that the legal landscape has changed dramatically.

"Last year, there were still cases in which protests were authorized, whereas none have been recently," Jeff Wasserstrom, a historian of modern China at the University of California, Irvine, told DW.

"The reason given has been the pandemic, but COVID-19 is not raging in Hong Kong right now. The police are turning a blind eye toward other kinds of gatherings," Wasserstrom said, adding that the number of permitted protests will be far fewer in the future.

Sunday's protest was relatively small. However, the number of arrests was similar to that seen during last year's large-scale demonstrations.

Galileo Cheng, the social affairs executive for the Hong Kong Catholic Institution Staff Association, told DW that those who were still willing to join yesterday's protest, despite the national security law and the ban on public gathering, were well-prepared and more aggressive than normal protesters.

"Until a permitted protest would be able to take place, such impromptu rallies could still happen if someone is willing to come out and organize one," Cheng said, adding that many peaceful protesters have been deterred by the pandemic and new rules not permitting demonstrations.

Since Beijing imposed the national security law on Hong Kong in July, police have widened criteria for arrest.

"There was already a sense last year that the police felt few limits on their actions, as the chief executive refused to criticize their actions or carry out an impartial investigation of the police," he said.

"Now there is a strong sense of a police force that feels it has carte blanche to do whatever it pleases. An important test will be how long a degree of judicial independence remains and how long the press is able to report," he added.

What protesters think of the election delay

The national security law has started to affect how far people are willing to go in criticizing Hong Kong's government, whether it is stores removing protest materials, self-censorship on social media or the reduced scale of protests.

However, Galileo Cheng pointed out that Sunday's protests featured slogans and signs that have been deemed illegal under the law.

"Protesters who came out seemed to have adapted to how the government and police enforce the national security law and decided to take the risk," Cheng said.

Wasserstrom said that although Beijing has been trying to transform Hong Kong into a mainland-style Chinese city, Hong Kongers have been able to push back.

"They have even won some victories, stopping efforts to curtail local freedoms," he said, adding that protest has become more complicated.

"The space for resistance is shrinking and the punishments are getting more severe. Lately, it has been harder to win even the smallest victories. Subtler forms of resistance may well become the norm; small ways of showing an unwillingness to accept the loss of things that make Hong Kong distinctive."