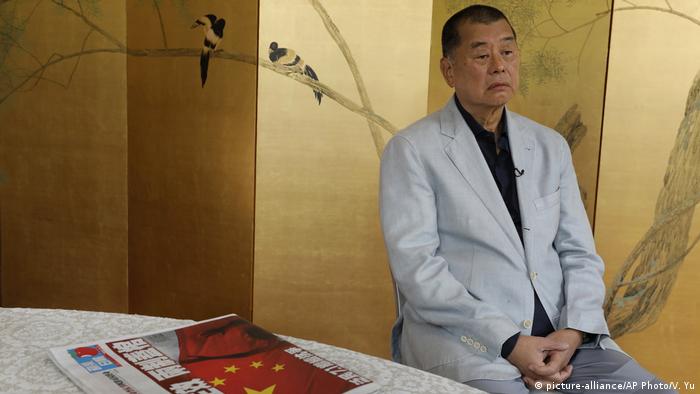 "Jimmy Lai is being arrested for collusion with foreign powers at this time," Mark Simon, a senior executive at Lai's media company Next Digital, which publishes local tabloid Apple Daily, said early on Monday.

Simon said police searched both Lai's and his son's home and raided the Next Digital headquarters in Hong Kong. It was not clear what the officers was looking for in the headquarters. Simon said in a tweet that police were executing a search warrant.

The new security law punishes anything China considers subversion, secession, terrorism and collusion with foreign forces with up to life in prison.

Police in the city said in a statement that seven people in all had been arrested on suspicion of violating the law, but did not provide details of who was taken into custody.

DW's Hong Kong correspondent Phoebe Kong said that although it had been widely expected that Lai would be a target, the "scope of the operation came as a shock to many people."

Beijing imposed the legislation on Hong Kong at the end of June, following months of anti-government protests last year.

Among the others arrested were two of Lai's sons and the young pro-democracy activist Agnes Chow.

Police now have sweeping powers to conduct searches without warrants and order internet service providers and platforms to remove messages deemed to be in violation of the legislation.

Joshua Wong, a pro-democracy activist and former secretary general of the political party Demosisto, told DW he wasn't sure when he will be arrested and extradited to mainland China, but that he "will continue the plan to fight for freedom and that's my decision."

Wong also said Beijing was "trying to use more and more excuses to silence our voice," but that "they can’t disqualify our commitment to fight for freedom and continue to engage in the democracy movement ... No matter what happens, we have no regret to continue course on free elections."

Lai became an outspoken advocate for democracy in Hong Kong after the bloody June 4, 1989 crackdown on pro-democracy protesters around Beijing's Tiananmen Square.

Lai, together with 14 other pro-democracy figures, is currently facing charges of organizing and participating in several massive anti-government protests deemed unlawful last year.

Much of the law is broadly worded and criminalizes certain speech, such as a ban on instigating hatred towards the government or advocating independence.

One provision orders authorities to "strengthen the management" of foreign news organizations.

Beijing has made little secret of its desire to rein in Hong Kong's media, both domestic and foreign.

Hong Kong reporters have historically been a crucial conduit of information out of mainland China. And the city's press corps routinely barrages officials with the kind of critical questioning that would be unthinkable north of the border.

But journalists now fear they may inadvertently cross a red line by reporting what others say.