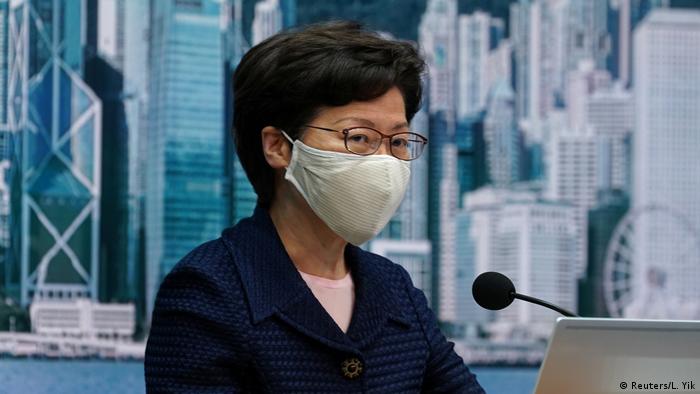 "The United States stands with the people of Hong Kong and we will use our tools and authorities to target those undermining their autonomy," Treasury Secretary Steven Mnuchin said in a statement.

The sanctions announced by the US Treasury Department block the US assets of those listed, and prohibits US persons from dealing with them.

Along with Lam, the sanctions list senior Hong Kong security officials Eric Chan and John Lee, along with Secretary for Justice Teresa Cheng, and Luo Huining, director of the Hong Kong liaison office, the most senior mainland political official based in Hong Kong.

The sanctions are being imposed under the Hong Kong autonomy act signed in July by US President Donald Trump over Beijing's security law for the semi-autonomous territory, which Washington says "denies autonomy and freedoms that China promised to the people of Hong Kong."

US presses hard on Hong Kong

The national security law was passed by Communist Party officials in Beijing on June 30, ostensibly to prevent sedition, collusion with foreign powers and terrorism in the Hong Kong.

However, the move caused outcry around the world as an imposition by Beijing on democratic values in Hong Kong and eroding the rule of law with lengthy prison sentences for exercising free speech.

The relationship of many Western countries with the Hong Kong has been fundamentally altered, as the law seen as eroding civil liberties while representing a de facto dismantling of the "one country, two systems" formula, which underpins Hong Kong's status as a global financial center.

Since the law was passed, the Trump administration has taken steps to effectively dissolve Hong Kong's preferential treatment, and is moving toward policies treating the territory like anywhere else in China.