Opinion: Khan-Trump meeting – will Islamabad deliver to Washington? | Asia| An in-depth look at news from across the continent | DW | 23.07.2019 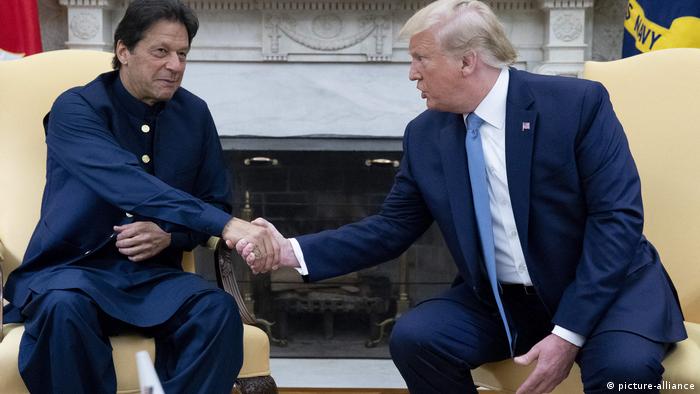 Pakistani Prime Minister Imran Khan's White House meeting with US President Donald Trump has come and gone. And not surprisingly, the most headline-grabbing moment of Khan's visit came when Trump made one of his signature off-the-cuff remarks.

In an exchange with the press, Trump said he would be willing to mediate the India-Pakistan dispute over Kashmir. It was a remark that surely didn't go down well with America's key partner India, which wants no external mediation whatsoever.

Still, this bizarre episode aside, the Trump-Khan summit — which lasted several hours — appears to have gone swimmingly. It included not just a cordial one-on-one meeting, but also other high-level exchanges that included a working lunch featuring several Trump administration officials.

Consequently, a relationship that had taken a deep plunge in previous months has resurfaced, and it now has the opportunity to be reenergized. Five key questions will help determine the relationship's trajectory in the aftermath of Khan's meeting with Trump.

Will the goodwill generated during Khan's visit endure?

A constant challenge for US-Pakistan relations is a lack of trust. Though the two countries enjoyed a fairly strong Cold War-era partnership, the relationship in more recent years has been beset by tensions that have inhibited trust.

From Pakistan's refusal to speak truthfully about the development of its nuclear weapons program and its ties to terrorists to America's covert activities in Pakistan, there is lots of baggage. For the relationship to capitalize on the momentum set in motion by Khan's visit, more high-level exchanges — and more dialogue as a whole — are of the essence. However, for the Trump administration, which favors transactional diplomacy over strategic dialogue, that's a mighty tall order.

Will Islamabad scale up its support for the peace process in Afghanistan?

Afghanistan was undoubtedly a core component of Trump's meeting with Khan. For Washington, getting Islamabad to step up its assistance in current peace talks with the Taliban is a prime objective.

Will the Pakistanis succeed in convincing the Taliban to agree to a cease-fire and to direct negotiations with the Afghan government? These are demands the Taliban has so far categorically refused to accept. If Islamabad makes headway in this effort, the US-Pakistan relationship will receive a huge boost — and an expansion of the relationship, into issues like trade and investment, could be in the offing.

However, that's an ambitious ask to make of Pakistan. To be sure, Islamabad wields leverage over the Taliban, thanks to the safe havens it provides to the group's leadership. Still, the insurgents are negotiating from a position of strength; they are waging robust offensives and hold more territory than ever before. They have little incentive to listen to anyone, including their Pakistani patron.

Will Washington offer some small economic inducements to Pakistan?

The Trump administration has dangled the possibility of greater trade and economic cooperation with Pakistan if sufficient progress is made in the areas of peace talks in Afghanistan and Islamabad's counterterrorism efforts. With Pakistan's economy a mess, any new US economic and trade support would be a major boon for a nation struggling through a serious balance of payments crisis.

The Pakistanis have come to Washington ready to talk business; its large delegation includes Khan's commerce adviser, and Khan's itinerary includes meetings with top corporations. Some type of US-initiated confidence-building measure — even something relatively modest, such as calling for an increased frequency of meetings under the Trade and Investment Framework Agreement (TIFA) — could go a long way and may encourage more Pakistani cooperation in Afghanistan.

Will there be a spoiler?

One reason for the fragility of US-Pakistan relations is that it doesn't take much to set back new progress. For years, the biggest threat has been a mass casualty terrorist attack in Afghanistan — particularly one that hits Americans or American targets — or in India, a key US partner. If such an attack happens and Washington concludes it originated in Pakistan, and was orchestrated by a group with ties to the Pakistani security establishment, then the relationship would suffer another blow. It would also exacerbate one of the core tension points in bilateral relations: Washington's view that Pakistan has not taken robust and irreversible steps against Pakistan-based, Islamabad-aligned terror groups that threaten American — and Indian — lives and interests.

Can divergent expectations be reconciled?

At the end of the day, Pakistan's immediate-term expectations of the relationship are more ambitious than those of the United States. Islamabad wants a complete reset and broadening of bilateral ties; Washington, at least for now, mainly wants more Pakistani assistance in Afghanistan and action against terrorists.

How the two sides address this disconnect in expectations will go a long way toward determining whether a relationship that's long been up and down experiences a new high — or takes another tumble.