Trump's first year as US president has been seen positively by Afghanistan, while Pakistan feels betrayed and angered by Washington's censure of Islamabad. It's unclear if Trump’s policies will bring lasting peace. 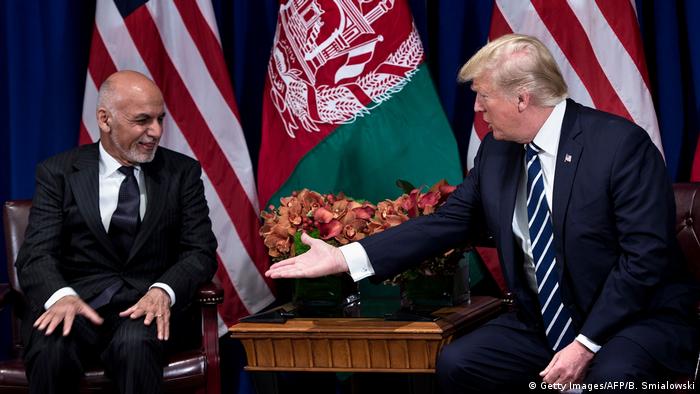 Much was at stake for Afghanistan during the last stages of Barack Obama's presidency. Trump's predecessor in the White House had pledged to end the Afghan war, the longest in US history, raising the prospect of a complete withdrawal of all American troops from the war-ravaged country.

Such a step would have left the volatile, impoverished nation at the mercy of an array of armed insurgent outfits like the Taliban.

By the end of his tenure, Obama left just over 9,000 US troops in Afghanistan and passed on the burden of deciding the future course of action to his successor Donald Trump.

2016 marked a difficult period for US-Afghan relations. Uncertainty shrouded Washington's strategy for the country and hurt confidence among Afghanistan's policymakers while sowing doubts over US commitment. Moreover, officials in Kabul knew little about Trump's vision for their country and the region.

Seven months into his presidency, however, Trump unveiled a new strategy for Afghanistan, vowing to deploy more troops, on top of the 11,000 already in the country, to train and advise Afghan security forces.

The announcement positively surprised many Afghans. Trump reasoned his decision with the argument that "a hasty withdrawal would create a vacuum that terrorists - including ISIS and al Qaeda - would instantly fill."

In addition to increasing the number of US troops, Trump pledged to support Afghan security forces in their war against the Taliban and maintain American presence in the country for as long as there was a need for it. Trump promised Americans that "at the end we would win."

"Trump made it clear that his country would remain in Afghanistan for as long as it was needed. This statement boosted morale among Afghan security forces and at the same time conveyed a clear message to the Taliban: Engage in peace talks or we will fight you for as long as it takes," Fakur added.

But it was Trump's statements about Pakistan that received much applause in Afghanistan. In his own style, Trump accused Islamabad of supporting the US' and Afghanistan’s enemies, and called on the Pakistani government to change its policies.

Unlike previous American administrations, which showered billions of dollars on Pakistan - in a bid to persuade it to abandon its backing to groups like the Afghan Taliban and Haqqani network - Trump began hurling threats at Islamabad soon after taking office.

The US president's approach did not go down well with the Pakistani military establishment, which controls the nation's foreign and security policies and has been a close ally of Washington for decades.

Trump's hard-hitting remarks also triggered a wave of anger against the US in the only nuclear-armed Islamic country in the world.

Observers believe US-Pakistani relations have witnessed a downward spiral since Trump's entry into the Oval Office. The Pakistani government blames the US leader's reckless tweets and policies for this worsening of ties, while the Trump administration points the finger at Islamabad's inaction against terrorist outfits operating from its territory.

"Trump's first year in office was a time of tension and frustration for Pakistan," said Raja Zafar ul Haq, a Pakistani senator. "Trump's policy has created a sense of betrayal among the Pakistanis," he added. Pakistan helped the Americans eliminate al Qaeda but it got nothing more than threats and accusations from President Trump, the Pakistani politician criticized.

Tauseef Ahmed Khan, a political analyst and former professor at the Federal Urdu University of Arts, Science and Technology in Karachi, holds both sides responsible for the poor state of ties.

Trump's willingness to allow Pakistan’s regional rival India to play an even bigger role in Afghanistan, coupled with Islamabad's support for the Haqqani network and Afghan Taliban, have led to the current situation, Khan argued.

"Only Trump cannot be blamed for the tension between Washington and Islamabad," he told DW.

To pressure Pakistan, Trump has also frozen US guarantees of security assistance to the country.

Trump and his advisers would need more than just one year to assess the outcome of their strategy for the region, said Michael Kugelman, a senior associate for South and Southeast Asia at the Washington-based Woodrow Wilson Center for Scholars.

He is of the view that only the passage of time and how all the stakeholders react to the current situation would determine the future of Trump's strategy for the region.

"It's too early to tell. At this point, we're nowhere we haven't been previously. There have been aid freezes in the past, and there have been demands that Pakistan do more," he told DW. The question at this point, he said, is whether President Trump agrees to stage punitive measures beyond aid freezes.

"If he did that, then the US-Pakistan relationship would enter uncharted territory, and we'd see how Pakistan responds," Kugelman stressed.

Experts believe 2018 will be a critical year to see if the new Af-Pak strategy can actually put the Taliban on the defensive and force it to come to the negotiating table, as well as cajole Pakistan into changing its behavior in ways that the US would like.

But if things do not change in the way Trump wants, he could change his position both on Pakistan and Afghanistan, Kugelman said.

"If he doesn't like what he sees, then he'll head for the exits. That may be disastrous for Afghans and the broader region, but it would play well with Trump's political base at home."