US media have reported that President Donald Trump is planning to withdraw half of American troops from Afghanistan. Analysts say the move would give the upper hand to the Taliban and their ostensible backer, Pakistan. 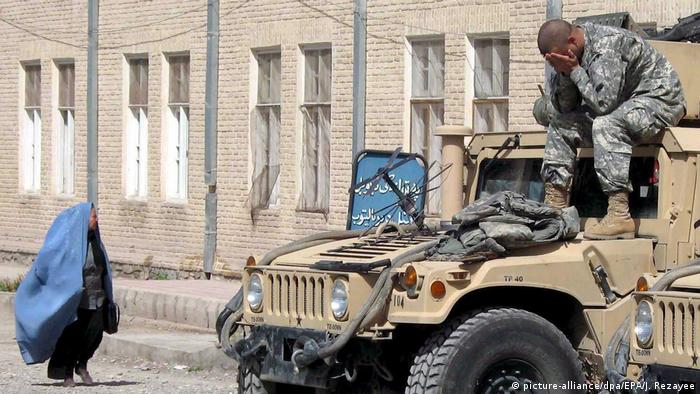 The Trump administration is reportedly planning to withdraw nearly 7,000 US troops – roughly half of the American military presence in the country – from Afghanistan.

US media claims that these soldiers could be heading back home within months.

These reports emerged after President Donald Trump announced Thursday that the "Islamic State" militant group had been defeated in Syria and thus the Middle Eastern country no longer required US troops there.

But the Taliban – the strongest militant force in Afghanistan – have not been defeated yet. On the contrary, their control over Afghan territories has increased manifold in the past few years. If this is the case, why must Washington reduce its presence in the war-torn country?

The US has intensified efforts to find a political solution with the Taliban in the past few months, with Zalmay Khalilzad, the US' special representative for Afghanistan, holding several high-profile talks with Taliban leaders in Qatar.

A victory for Pakistan?

These talks are being facilitated by Pakistan, whose prime minister, Imran Khan, maintains that the Islamist group can't be defeated through war.

However, both Kabul and Washington have been skeptical of Islamabad's long-term motives in Afghanistan. Afghan and US officials have repeatedly said that Pakistan backs some factions of the Taliban that destabilize the Afghan government. By doing that, the powerful Pakistani military hopes to minimize Indian influence in Afghanistan and a return of the Taliban in Afghan politics, they say.

Pakistan's military and civil establishment, analysts say, still consider the Taliban an important strategic ally, who they think should be part of the Afghan government after the NATO pullout.

Observers say that the Pakistani military hopes to regain the influence in Kabul it once enjoyed before the United States and its allies toppled the pro-Pakistan Taliban government in 2001.

Pakistan's Afghanistan policy hasn't changed since the US toppled the Taliban regime in 2001, but the Trump administration's stance toward Islamabad has wavered in the past few weeks, experts point out.

The potential US troop reduction would likely to give an upper hand to Islamabad in dictating the future political setup in Afghanistan.

Siegfried O. Wolf from the Brussels-based South Asia Democratic Forum (SADF) told DW that he was convinced that several elements within the Pakistani security apparatus still believe that the Taliban could be used as a strategic tool to counter Indian presence in Afghanistan.

Read more: 'Father of the Taliban' killed in Pakistan

'Weakening your own position'

It remains to be seen whether President Trump would actually withdraw 7,000 troops from Afghanistan, but the fact that the US Secretary of Defense Jim Mattis – one of the main supporters of a strong US military presence in Afghanistan – is leaving his post in February, 2019, has definitely created more uncertainty around the West's Afghan mission.

"If the US actually goes ahead with the troop reduction plan, it would be a manifestation of Trump's 'America First' policy," Thomas Ruttig, an expert from the Afghan Analysts Network, told DW.

"But at a time with Khalilzad is trying to negotiate with the Taliban, the troop reduction does not make any sense," he added.

"This would weaken the positions of both Washington and Kabul in the middle of peace talks," Ruttig emphasized.

But some experts are of the view that a potential troop withdrawal could be a calculated decision by Trump.

"The Taliban have repeatedly stressed that they would only make peace with the Afghan government once US troops leave the country," Wahid Muzhdah, a Kabul-based security analyst and a former Taliban official, told DW.

"Reports of the US troop reduction are probably meant to give some assurance to the Taliban – assurance that the US does not plan to stay in the country forever," Muzhda added.

Attiqullah Amarkhail, a retired Afghan army general, has a different take on the situation. He said that the media reports about a possible troop reduction could be a message for the Afghan government, which is not on the same page with Khalilzad on how to pursue peace talks.

"It sends a message to Kabul that it should back the US plan or face the Taliban on its own," Amarkhail told DW.

President Ashraf Ghani's government is reportedly unhappy with Pakistan-mediated talks between the Taliban and the US. It believes that it will further weaken its position and will leave it out of the future political setup in Afghanistan. That is why Kabul once again stressed that peace negotiations should be Afghan-owned and Afghan-led.

Analysts believe that Pakistan could be the main beneficiary if the Trump administration goes ahead with troop withdrawal.

"It shows that Trump does not care about Afghanistan," said analyst Ruttig.