Post-ceasefire attacks in Afghanistan have killed over a dozen national troops, dashing hopes for a long-term truce between the Taliban and Kabul. Why are the militants unwilling to reciprocate government's peace offer? 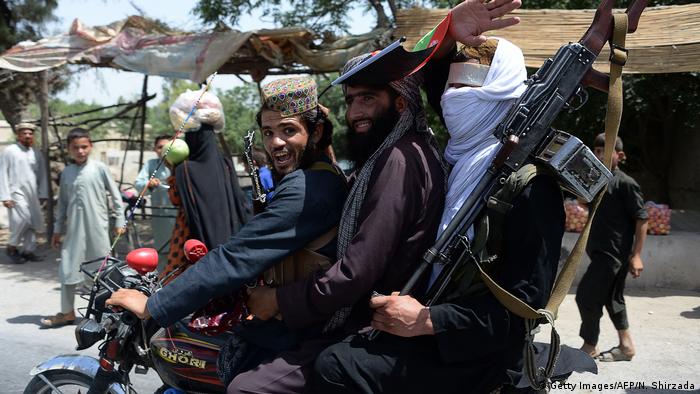 Just two days after the end of a three-day ceasefire between the Afghan government and the Taliban, the militant group attacked police checkpoints in northern Kunduz and Faryab provinces, killing at least 15 members of Afghan security forces. The assaults contradict the Afghan government's claims that peace with jihadists could be a real possibility.

The ceasefire, which expired on June 18, had raised hopes that a pause in fighting could finally pave the way for a peaceful resolution to the Afghan conflict.

On the last day of the Eid ceasefire, Afghan President Ashraf Ghani offered to extend the truce and once again urged the Taliban to join peace negotiations. Ghani also offered to recognize the Taliban as a political group and discuss amendments to the Afghan constitution to make it happen.

"So long as the Taliban think they are winning the war, and they certainly think they are winning, they won't have any interest in entertaining deals, no matter how generous they may seem," Michael Kugelman, a researcher at the Washington-based Woodrow Wilson Center for Scholars, told DW.

The Taliban control or have a formidable presence in vast swathes of Afghan territory. According to US statistics, 14 percent of all Afghan districts are controlled by the Taliban and 30 percent more of such areas are heavily contested by Afghan security forces and the militant group, which was ousted from power by the US in 2001.

While the Taliban say they want to end Afghanistan's almost 17-year-long war, they reiterate that their conditions for peace have not changed.

"The Taliban have long demanded that foreign troops either completely pullout from Afghanistan or that they set a date for a withdrawal," Faiz Mohammad Zaland, a lecturer at University of Kabul, told DW.

"As long as this demand is not met, the Taliban will continue to launch attacks across Afghanistan," he added.

Wahid Muzhdah, a Kabul-based security analyst, told DW it would be difficult for the Afghan government to force NATO troops to leave the country. "It is unlikely that US troops will exit Afghanistan. But the Taliban will not enter peace talks without their withdrawal," he underlined.

Also, the withdrawal of international troops from Afghanistan does not guarantee that the Taliban will eventually lay down their weapons. The group, Kugelman believes, may continue its efforts to overthrow the Afghan government, seizing the battlefield advantage created by a possible US absence.

"Still, given the urgency of the situation, the US needs to be more flexible and relax its staunch opposition to direct talks with the Taliban," Kugelman added.

Another major hurdle to peace talks is that the Afghan government and Washington are unclear about whom to talk to within the Taliban.

While the ceasefire presented a unified picture of the Islamists, in reality it is a divided outfit with different splinter groups that have their own goals and objectives.

Some Taliban fighters have already joined the so-called "Islamic State" (IS) jihadist group that is consolidating its presence in Afghanistan. Some have established a separate anti-Pakistan front.

The main Taliban group in Afghanistan is still believed to be close to Pakistan. Kabul and Washington claim Islamabad is using this group as a proxy to minimize India's increasing influence in the war-torn country.

Read more: Is the US bypassing Pakistan for new Taliban strategy?

The Taliban, on the other hand, are not willing to talk to Kabul and stress they will only negotiate with the US. In a statement marking the end of their ceasefire on Sunday, the Taliban called on "the invading American party" to "sit directly for dialogue with the Islamic Emirate to find a solution for the ongoing imbroglio."

But the US and its NATO partners have made it clear that any Afghan peace talks should be Afghan-led and Afghan-owned.

"All this adds to the complexity of the situation," Muzhdah said.

The real winners of the Eid ceasefire were Afghan civilians who could finally celebrate holidays without fear of attacks from the Taliban. The Afghan government, too, benefited from the brief truce as it showed its determination for peace to both the international community and the Taliban.

During the ceasefire, Afghan officials, including the country's interior minister, posed for pictures with the Taliban in an attempt to show that the Taliban will be welcomed to Afghanistan's power structure if they agree to a deal with the government.

"A period of calm benefits Kabul as it gives the government more space and support to push forward the reconciliation process. It may also force the Taliban leadership to realize that many of its fighters are tired of war," Kugelman said.

The Taliban, on the other hand, used the truce to present themselves as a united force.

"The Taliban proved that they function as a group. They succeeded in that," Zaland said.