Hamid Karzai: Former Afghan president hopeful for ′permanent peace′ with Taliban | Asia | An in-depth look at news from across the continent | DW | 12.06.2018

Former Afghan President Karzai has hailed the ceasefire agreement between Kabul and the Taliban at DW's Global Media Forum. He also said the West, including Germany, must admit their failure in the war-torn country.

It was Hamid Karzai who set up a peace commission in 2010 for talks with Islamist insurgents. The Taliban, however, did not reciprocate the gesture and instead intensified their attacks on NATO forces, Afghan soldiers and civilians.

But a recent week-long Eid truce between President Ashraf Ghani's government and the militant group has raised hopes that the 16-year-old deadly conflict could finally be resolved. It was the first time since 2001, when US forces ousted the Taliban regime, that the group has shown a degree of flexibility in their dealing with the Afghan government, which it considers a "US puppet."

Former Afghan President Karzai is hopeful the temporary ceasefire deal between Kabul and the Taliban could lead to something more permanent. But he admits there are a number of obstacles to achieving this goal.

"I hope that this short-term truce could lead to a lasting peace in Afghanistan. But we must not forget that the war in Afghanistan is an imposed war. The United States, Pakistan and all other stakeholders in the conflict need to reach a deal to make it [the ceasefire] permanent," Karzai told a 2018 DW Global Media Forum panel: Peace With the Taliban: A Compromise on Human Rights?, held in Bonn, Germany. 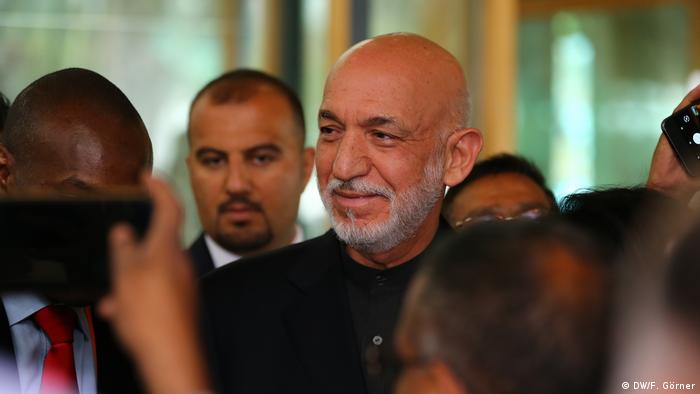 Karzai wants the US to put more pressure on Pakistan

When asked by host Waslat Hasrat-Nazimi as to why he could not achieve what President Ghani has in terms of a step forward toward peace, Karzai blamed the initial Western response to the Afghan conflict almost 17 years ago.

"The 2001 international conference on Afghanistan, which was held in Bonn, should have included the Taliban. It was a mistake not to have extended the invitation to the representatives of the ousted regime," Karzai remarked.

"To make matters worse, the US went on a revenge campaign against the Taliban, which forced the fighters to seek shelter in mountains and inside Pakistan," he added.

Karzai also blamed the US for not pressuring Islamabad enough to abandon its alleged support for Islamists.

"Taliban as Afghans wanted peace and could have been brought to negotiations back then. Now, it is a long way to go to attain peace."

But Sandra Petersmann countered the "foreign factors" argument and said that it was high time that Afghanistan accepts the responsibility for the peace failure.

"The problem is that even if the US pulled out all troops from Afghanistan, and Pakistan began to cooperate on the insurgency issue, there would not be a guarantee for peace," she underlined.

Pakistan's role in the Afghan conflict featured prominently during the discussion as all participants agreed that Islamabad continues to use its militant proxies to destabilize its neighboring country.

"During the 1980s Afghan war, the US and Pakistan used religion as a narrative to fight against the Soviets. It was a blunder. Pakistan still uses it against Afghanistan. After 2001, Washington backed Pakistan," Karzai said.

Read more: Is the US bypassing Pakistan for new Taliban strategy?

The former Afghan strongman, who is still active and politics and could run for president again, believes the Trump administration in the US hasn't really put pressure on Islamabad to change its Afghanistan policy.

To that statement, Markus Potzel, Germany's special envoy to Afghanistan and Pakistan, said the US is definitely stricter with Pakistan than before.

"But for Islamabad, Afghanistan is a strategic issue. It uses terrorism as a bargaining chip," Potzel said.

Petersmann, who has spent many years as reporter in Afghanistan, said that Pakistan is not the only country in the region that uses proxies inside Afghanistan.

"Putting all blame on Pakistan is not right," she insisted.

Potzel said the German government has kept the dialogue open with Islamabad on the issue.

"Our forces are in Afghanistan to secure the country, to advise their military. But peace in the country is Afghanistan's own responsibility."

"Afghans were put into the Guantanamo jail. Afghans have been betrayed by everyone," Musadiq said.

"Afghan women were used as a tool to justify the war. At the same time, the militants targeted them," she added.

"My government's priority was security. You can only obey law when there is peace," Karzai responded, adding that he was against the US detention of Afghan citizens.

The participants also highlighted the increasing "Islamic State" (IS) threat to Afghanistan and underlined the importance of tackling the threat.

Responding to a question, Karzai lauded the Pashtun Tahaffuz Movement (PTM, Movement for the protection of Pashtuns) in Pakistan as an anti-war campaign that could make a real difference in the region. PTM leaders accuse both the Taliban and the Pakistani army for violence, devastation and human rights abuses in the northwestern tribal region.

The job hazards of an Afghan district governor

Opinion: Afghanistan blasts are an attack on press freedom

Peace in Afghanistan is crucial for the German government to continue with the Afghan refugees' repatriation.

The controversy over "safe zones" in Afghanistan, and whether sending back Afghan refugees to their home country is safe, has divided German society.

"Life in Germany for the Afghan asylum seekers is not a bed of roses. If we achieve peace in Afghanistan, the refugees would like to go back," Potzel said.

The former Afghan president shares the same view and believes that Afghan refugees would like to return to Afghanistan if peace prevails.

There was no clear consensus in the panel on the mechanism to reach a permanent truce with the Taliban or whether it would even be legitimate to involve militants notorious for their brutality and massacres of Afghan civilians into the political arena.