Imran Khan′s US visit — Afghan peace to dominate talks with Donald Trump | Asia| An in-depth look at news from across the continent | DW | 19.07.2019

Afghanistan peace is likely to be the key topic during talks between Pakistani Prime Minister Imran Khan and Trump. But analysts warn Washington must not turn a blind eye to a crackdown on media and political plurality. 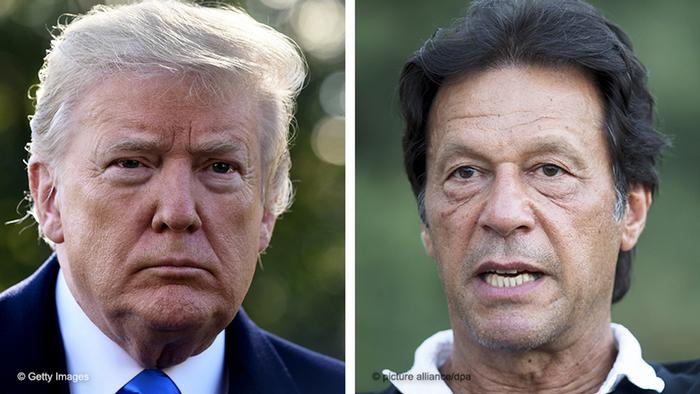 Pakistani Prime Minister Imran Khan is scheduled to meet with US President Donald Trump on Monday. It is Khan's first official visit to the US since becoming Pakistan's prime minister in August 2018.

According to the White House, the meeting "will focus on strengthening cooperation between the United States and Pakistan to bring peace, stability, and economic prosperity to a region that has seen far too much conflict."

President Trump and Prime Minister Khan "will discuss a range of issues, including counterterrorism, defense, energy, and trade, with the goal of creating the conditions for a peaceful South Asia and an enduring partnership between our two countries," it added.

This was a rare statement from the Trump administration on Pakistan that did not link Washington's ties with Islamabad to curbing Taliban attacks in Afghanistan — or that didn't directly ask Pakistani authorities to do more in the war on terror.

However, a closer look at the White House statement shows that although Afghanistan was not mentioned directly, the connection is still implied.

Read more: Is Trump handing over Afghanistan to Pakistan?

A diplomatic observer in Washington pointed out that Trump and his foreign policy and defense chiefs have always linked "stability and economic prosperity" in South Asia to peace in Afghanistan. Also, the stated "goal of creating the conditions for a peaceful South Asia" is seen in Washington's diplomatic circles as a veiled reference to the US demand for improvement in relations between India and Pakistan.

This demand from Washington is rooted in the idea that "a durable peace in Afghanistan will only be possible if India and Pakistan stop vying for influence in that unfortunate country," Farhat Haq, a scholar at the Washington-based Wilson Center, told DW.

Aparna Pande from the Hudson Institute says that "Pakistan seeks a friendly Afghanistan to prevent encirclement" from both Indian and Afghan sides. Indians, on the other hand, argue that they want to stay engaged with Afghanistan to ensure that it's not used for stirring troubles in Kashmir, as done in the recent past.

With this in the background, Pakistani diplomats in Washington admit that they do expect Afghanistan to dominate the Trump-Khan meeting on Monday.

As elected civilian governments in Pakistan have very little say on security and foreign policy matters, Khan has reportedly invited the country's powerful military chief, General Qamar Bajwa, to accompany him to the US. Washington sees this as a positive sign.

"Policymakers in Washington have noticed that after a long time, Pakistan's civil and military leaders are on the same page on key issues," Marvin Weinbaum, a former senior State Department official and a scholar of South Asian affairs, told DW.

Weinbaum says that on issues like Afghanistan and terrorism — two primary concerns in South Asia for the Trump administration — "no major decision can be implemented without the [Pakistani] army's support."

After coming to power, President Trump was very critical of Pakistan's alleged support to Islamist militants in Afghanistan. Since 9/11, all three US administrations have acknowledged Pakistan's influence in Afghanistan because of shared borders and religious and ethnic affinities.

At same time, Washington has been urging Islamabad for many years to apply this influence in stopping Taliban fighters from attacking US and Afghan targets.

But lately, the US has taken a "softer" approach towards Pakistan, and both Washington and Islamabad have taken some important measures towards building confidence.

At his nomination hearing last week, President Trump's nominee for the chairman of the Joint Chiefs of Staff, General Mark Milley, told US senators that "Pakistan has made positive contributions in support of Afghan Reconciliation."

The first major indication that the US and Pakistan have been working quietly to mend their strained relations came earlier this month, when Washington designated Pakistan's separatist Baluchistan Liberation Army (BLA) as a terrorist group.

Read more: Why did US declare an anti-Iran militant group terrorist?

A week after the designation, the White House confirmed that President Trump had invited Prime Minister Khan to Washington for talks.

Pakistan reciprocated the US move this week by arresting Hafiz Saeed, a militant leader allegedly involved in the 2008 Mumbai terrorist attacks that killed 174 people, including American citizens.

General Milley has made it clear that the US' "objective would be to preserve the defense relationship between the US and Pakistan even as we press Pakistan to take action on US requests."

Miley highlighted another concern that may have factored in ameliorating US ties with Pakistan, saying Pakistan is "a key partner in achieving US interests in South Asia," and that's why "we need to maintain strong military-to- military ties based on our shared interests."

"Since the suspension of security assistance, Pakistan has also expanded its outreach to other countries, including Russia and China, to meet its security and economic assistance needs," the general said.

But Khan's growing comradeship with the country's top military brass has alarmed opposition politicians in Pakistan who fear that this could be used against them.

Pakistani rights activists say the US support for Khan's government and the military is emboldening the authorities to crack down on political opponents and independent media.

The government recently arrested Former Prime Minister Shahid Khaqan Abbasi on graft allegations. Former Prime Minister Nawaz Sharif, who had tried to improve ties with India and was critical of the military's alleged involvement in politics, has been in jail for over a year. Asif Ali Zardari, Khan's political opponent and a former president, has also been incarcerated.

In recent months, the security establishment has been accused of arresting dozens of workers of the Pashtun Tahafaz (Protection) Movement, or PTM, which has criticized the military's actions in the tribal regions in the northwestern province of Khyber Pakhtunkhwa and the western province of Baluchistan.

Activists say that while Washington needs Pakistan to facilitate Afghan peace talks, it should not turn a blind eye to the rights abuses in the Islamic country.

How would the US deal with a 'Prime Minister Imran Khan'?

Pakistani politician Imran Khan could become the country's next premier after the July 25 vote, but his stance against the US' role in Afghanistan could be a hurdle in the Trump administration's dealings with Islamabad. (21.06.2018)

Pakistan's Interior Ministry has ordered 18 international aid agencies to shutter their operations and leave the country. Activists have said they were not given a reason for the expulsion. (05.10.2018)