Opinion: Climate protection? Too little, too late and too timid

As millions of people took to the streets worldwide to demand action on climate change, the German government approved a raft of new measures. But they fell way short of requirements, writes DW's Martin Muno. 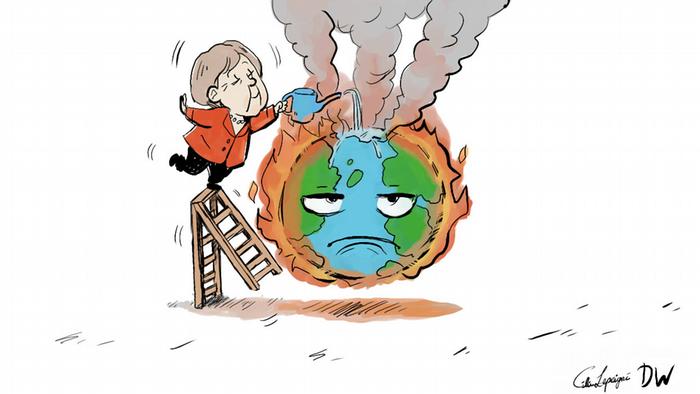 That our earth is the basis of all life and that there is no "Planet B" used to be the motto of eco-activists. Today it is a truism repeated over and over by scientists and politicians.

Now the only ideologues still audacious enough to deny that humans and rising C02 emissions have caused climate change are the likes of US President Donald Trump, his Brazilian counterpart Jair Bolsonaro and the leader of far-right Alternative for Germany (AfD), Alexander Gauland.

The worst-case scenario is the threat of an uncontrollable chain reaction being set in motion. Such a trajectory could see Earth heat up by about 4 to 5 degrees Celsius. Sea levels would rise drastically and entire regions would become uninhabitable.

Faced with such apocalyptic scenarios, the 2015 United Nations Climate Change Conference in Paris decided that everything humanly possible should be done to reduce the rise in temperature — preferably to below 2 degrees.

That’s because the clock is ticking. In order to achieve the 1.5-degree target, an aim very much worth striving for, humankind would only be able to release C02 levels at the current rate for another eight years — and not a single gram more after that. The high turnout at the Fridays for Future demonstrations indicates that people are taking these figures seriously.

Greta and the 'Climate Chancellor'

The most prominent environmental activist, Swedish teenager Greta Thunberg, said: "I want you to panic... I want you to act as if the house is on fire, because it is."

And what is the German government actually doing? The one led by the self-styled "Climate Chancellor" Angela Merkel? A chancellor who acknowledges that all of the aforementioned forecasts are based on scientific fact? To stay with Thunberg's metaphor, Merkel is simply preparing a few watering cans.

Yes, many of the measures Berlin unveiled on Friday are at least steps in the right direction: Make flights and car driving a little more expensive and rail travel a little cheaper; promote e-mobility, and modernize old, inefficient heating systems.

But all in all, the climate package is paltry and small-scale — and far too late. There isn't even a timeline for the CO2 emission cutbacks.

What is painfully obvious is that the government is not prepared to break the bank to tackle the threat of global climate change. The package was designed to avoid increasing the public debt and losing voters.

Subsidies that are truly harmful to the environment will remain in place: tax breaks on diesel; the complete tax exemption for kerosene; and the commuter allowance, which will even be increased

The expansion of renewable energies is grinding to a halt, and the last remaining coal-fired power plant will stay in operation for another 20 years.

High finance, of all sectors, is showing how climate protection can be achieved while the government pussyfoots around.

In the run-up to the next UN climate summit, some 500 financial bodies from around the world are demanding that governments take steps that go much further than the obligations set out under the Paris Agreement.

Carbon emissions should be made drastically more expensive, all subsidies for fossil fuels worldwide should be stopped, and green investments encouraged, they say. The total cost of this package? Some $35 trillion (€31.7 trillion).

Investors, of course, are not just acting out oft he goodness of their hearts: On the one hand, they fear considerable risks due to climate change; on the other, they see significant investment opportunities in the transformation of global energy use.

It would be great if the German government could be so far-sighted — or at least look beyond the next election.

However, anyone pointing a finger at others is pointing three fingers at themselves —  the same applies to the author of this article, too.

Of course, governments — and not just in Germany — should focus their energies on creating climate-friendly policies.

But we, as citizens and consumers, also have a duty: Do I have to drive an SUV? Do I have to have a long-haul vacation every year? Do I need to eat meat every day? What can I do to reduce my carbon footprint?

Climate change is going to push us out of our comfort zone. For our children and grandchildren, however, it threatens their very existence.

Click here to read the opposing view to this opinion piece

'Doomsday Clock' remains at 100 seconds to midnight 0m ago

Serbia cancels plan for lithium mine following protests 4h ago