Germany is only responsible for around 2% of the world's carbon emissions. And there's a quick and easy way to reduce that even further, as DW's Felix Steiner argues in this polemic. 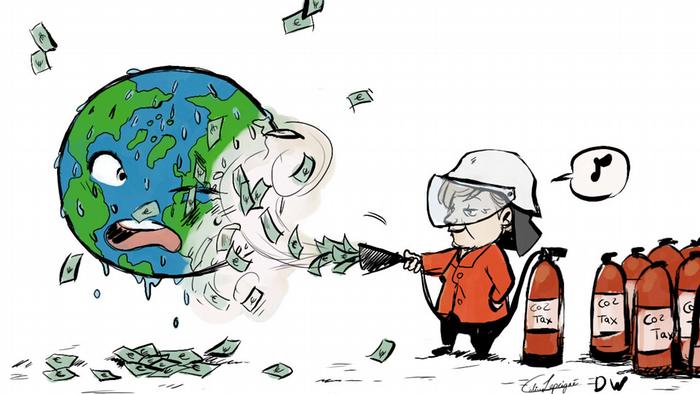 What a spectacle! A 19-hour-long struggle, accompanied by demonstrations in front of the Chancellery in Berlin, and 500 other cities throughout Germany. But the objective was nothing less than saving the world!

Just a few days before the next United Nations climate summit, protesters took to the streets across the globe. And nowhere is the topic revered with such fervor as it here in Germany.

Germans are once again in their element: We know what is noble, effective, and what is right. And we must set an example for the rest of the world so that they fall into line behind us as quickly as possible.

''German values shall cure the world'' is a line from a poem penned by Emanuel Geibel from back when Germany still had an emperor.

And our government has in fact pulled off a remarkable feat: Over the next four years, a massive €54 billion ($59 billion) will be redistributed. Of course there will be some who profit from it. But for the average person, it simply means a sharp tax hike. After all, people will still have to drive to work and do not want to freeze in winter.

Finance Minister Olaf Scholz must be a very happy man. Who can recall a time in history where people have demostrated in such numbers to see their taxes raised?

It is somewhat perplexing that the demonstrators are mostly young people. No matter how well the economy has been doing, there has never been enough money for schools and universties in recent decades.

How Germany can halve carbon emissions

Now, at last, €5 billion (a tenth of the sum for that put towards saving the world) has been made available to equip schools with modern computers. And this in a country with no natural resources, other than the abilities of its people!

Yet young people do not seem fazed by this imbalance between climate spending and education spending. As their banners proclaim. without climate protection, they have no future anyway.

What nonsense! The world will not end in 2030 or in the decades that follow — no matter how much the temperature changes. The daily apocalyptic talk of crisis, catastrophe, and tipping points seems to have clouded the senses of many people.

The fact that this alarmism becomes counterproductive can be felt by the climate protection movement in the US. Writing in the renowned New Yorker magazine, Jonathan Franzen posed the question: What happens now that we are all doomed?

Action for the planet - Climate protests in Berlin

Keeping Germany at the forefront of world technology

€54 billion. Think of everything we could have done with all that money.

What about investing in nuclear fusion research or developing fuel cell cars? We could advance every form of progress and innovation that is not dependent on the overexploitation of resources.

We could keep Germany at the forefront of global technology in order to secure the hard-earned prosperity.

But it is all going to take too long? The climate targets of 2025 and 2030 can’t be achieved in this way alone? Perhaps not.

However: There is a very easy way that we could meet these targets. Put the existing nuclear power plants back into operation and get rid of the horrendous, coal-powered carbon polluters!

In 2011, the nuclear phase-out was approved with messianic certitude. With it, Germany looked to lead the way, but no other state has followed suit since.

On the weekend, I will not be out demonstrating. Instead, I'll be preparing for the approaching winter by chopping wood. And what a satisfying task, one of which I can immediately see the results. One that is guaranteed to work. As temperatures drop outside, my living room will be warm and cosy.

Click here to read the opposing view to this opinion piece

What would a 'Marshall plan' for Ukraine entail? 2h ago

Opinion: Climate justice must be more than a promise 13h ago