Almost casually, a politician vying to replace Angela Merkel as CDU party leader has taken an ax to the right to asylum in Germany's constitution. It is a watershed moment in German postwar history, writes Jens Thurau. 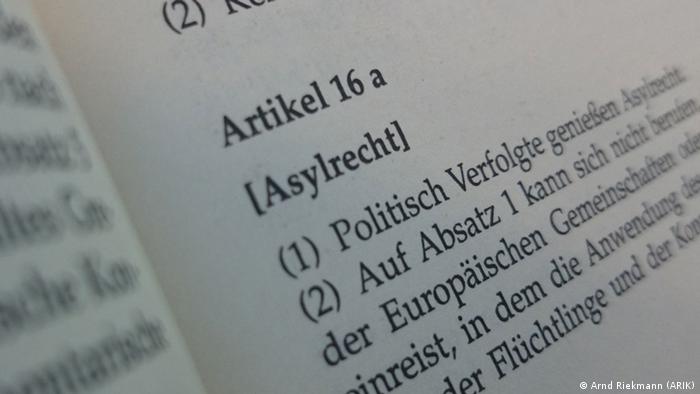 It happens rather often that developments that can bring fundamental changes to a country take root in just one brief remark, or an almost casually dropped statement. So it might be useful if we take note of this date, November 21, 2018.

That's the day when Friedrich Merz — who is vying to succeed Angela Merkel as leader of Germany's largest party, the Christian Democrats (CDU) — just in passing called into question the universal right to asylum enshrined in Germany's constitution, or Basic Law.

The constitution is clear

"Persons persecuted on political grounds have the right to asylum." This clear statement has weathered all storms thus far. For example, restrictions introduced in 1993, a year which also saw the arrival of many refugees in Germany, primarily coming in from Southeast Europe as a result of the wars that followed the collapse of the former Yugoslavia.

At the time, there were — as there are now — angry and sometimes violent protests against this. Similarly, the most recent tightening of asylum laws, after hundreds of thousands of people entered the country since 2015 — this time predominantly originating from Syria, Iraq, Afghanistan, and Africa — also left that plain statement untouched. None other than German Chancellor Angela Merkel upheld its validity.

It's true: as a result of numerous restrictions, many people no longer have a chance of obtaining asylum in Germany. It's also true that, among all European Union countries, only Germany sets out an individual right to asylum, which every individual is entitled to claim in courts up to and including the highest judicial authority. By the same token, it's correct that a unified European regulation would make sense. The latter, however, is nowhere near in sight.

But above all — and this is what Merz's proposal would radically change — the basic right to asylum has always been an essential self-assurance with deep roots in German history: Over 12 years of the Nazis' reign of terror, we Germans imposed immense suffering on the world. We persecuted and killed people, simply because of their religion, their origin, their political beliefs and many other reasons.

We must remember that many Jews who knew their lives were in danger tried to escape but failed to make it out because many countries simply refused to accept refugees. As a consequence, they died in extermination camps. The right to asylum in Germany's Basic Law that was established in 1949 became part of the vow that something like this must never happen again.

As a consequence, Germany didn't become a stronghold of morally superior people. Neither the east nor the west of the country really managed to integrate migrants. In what was formerly West Germany, they were called "guest workers" for a long time, a term implying that those people would leave again soon, which they didn't.

But the right to asylum as stipulated in the Basic Law remained. It was based on a consensus between Germany's political parties; it was sustained by the experience of flight and displacement — also of many Germans — after 1945. And most recently, Merkel steadfastly adhered to the basic right to asylum, obviously guided by Christian values as well.

Historical experience and principles derived from it do fade, and those principles can change; that's the normal state of affairs. But for a good reason Germany's Basic Law includes several regulations which cannot be altered at all — they are guaranteed forever. And all other articles can only be altered by a two-thirds majority in parliament.

Political upheavals triggered by the high number of refugees of recent years, the polarization of society — all of this contributed to changing the country, making it tougher, making the political climate colder. Abandoning the constitutional right to asylum, however, would break Germany's connection to crucial aspects of our history. We must not let it happen!

Coronavirus digest: US warns against travel to 80% of world 1h ago

Reporters Without Borders: Press freedoms under pressure in pandemic 2h ago

Opinion: A very German way of handling the COVID-19 pandemic 8h ago