Biologist Timothy Mousseau has spent years collecting mutant bugs, birds and mice around Chernobyl and Fukushima. In a DW interview, he shares some surprising insights into the effects of nuclear accidents on wildlife. 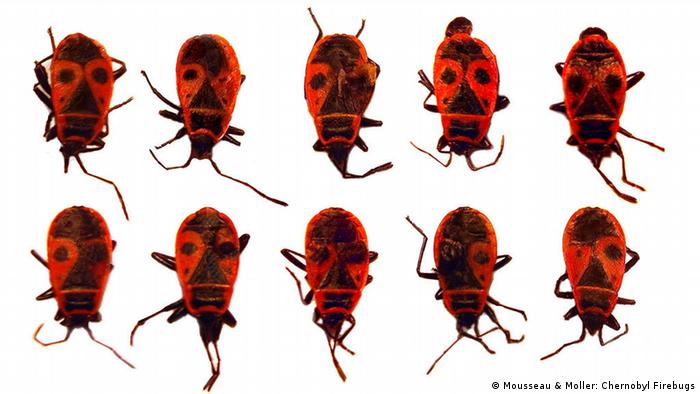 DW: Professor Timothy Mousseau, did you collect these mutant firebugs [pictured at the top of the page]?

Timothy Mousseau: Yes, the firebugs are really an eye-opener. My research partner Anders Moller and I were visiting Chernobyl on April 26, 2011. We were wandering around Pripyat collecting flowers, to study their pollen, when Anders reached down to the ground and pulled up this little bug with red and black markings. He said: "Tim, look, it's a mutant - it's missing an eye spot!"

From then on we started collecting these little bugs in each place we visited, from the most contaminated parts of the Red Forest to relatively clean areas in abandoned villages. Eventually we had several hundred of these little critters. It was very obvious that deformed patterns were much more prevalent in areas of high contamination.

This is just one of many similar anecdotes about the deformed critters of Chernobyl. Literally every rock we turn over, we find a signal of the mutagenic properties of the radiation in the region. 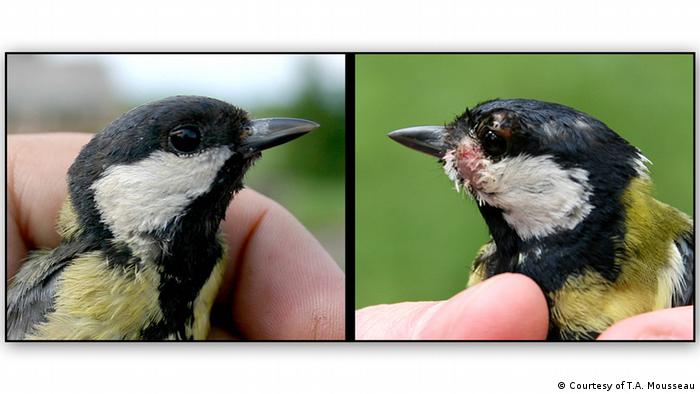 A pair of great tit birds collected near Chernobyl - left is normal, the individual on the right has a facial tumor

Is there a threshold of radiation below which there's no effect?

The impact of radiation on rates of mutation, cancer and mortality varies a good deal by species. But statistically, there's a simple relationship with dose. Small dose, small effect; big dose, big effect. There doesn't appear to be a threshold below which there's no effect.

Interestingly, organisms living in nature are much more sensitive to radiation than lab animals — comparing mice raised in labs and mice in the wild, exposed to identical levels of ionizing radiation, the mortality rate among wild mice is eight or 10 times that of lab mice. It's because lab animals are protected from most stressors — like cold or hunger.

Are plants and trees affected too?

Yes, we've collected a lot of deformed pollen. Seen a lot of deformed trees, too. Pines often show growth-form abnormalities, even in normal areas with no radionucleotide contamination. Sometimes it's an insect infestation, sometimes a hard freeze at the wrong time — you can find such anomalies anywhere.

But in contaminated areas of Ukraine, we have a correlation between frequency of abnormality and the Chernobyl event. It's pretty strong evidence. There was a paper showing a very similar phenomenon in Fukushima. The trees there are very young, but will likely also be twisted up in knots 30 years from now! 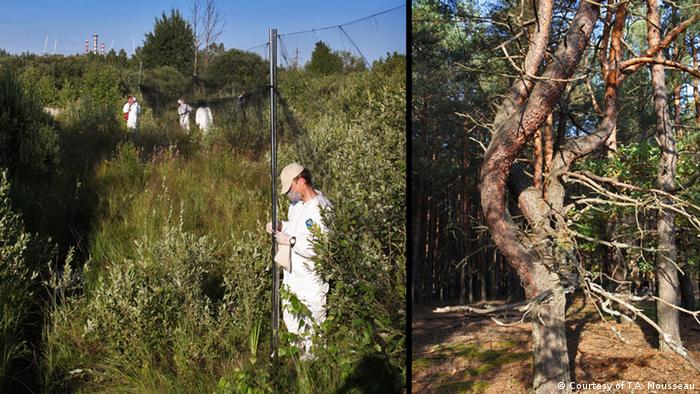 Mousseau's field crew collecting pollen and insect samples on the left, with the Chernobyl reactor in the distance. Right, a mutant pine tree at Chernobyl

What are the long-term effects of radiation on animal or plant species in contaminated areas? They've had their genomes altered. Will mutants persist?

Well, in the long run, no. The thing is, some background rate of mutations happens constantly in every species, even in uncontaminated areas - albeit at a much lower rate than in areas contaminated by nuclear accidents. So most genetic variants have been tried already. The great majority are either neutral or slightly deleterious. If a mutation had any benefit to offer, it would already be there in the population.

So the long-term effect of nuclear accidents on biodiversity is … none?

Yes, that's right. Over evolutionary time, we expect that populations will return to normal after the mutagen disappears. Radionucleotides decay, hot sites eventually cool down, mutations become less frequent again, and healthy animal and plant populations recolonize the sites. So the genetic status quo ante returns — except if mutations have occurred that permanently enhance fitness, but that's very rare. 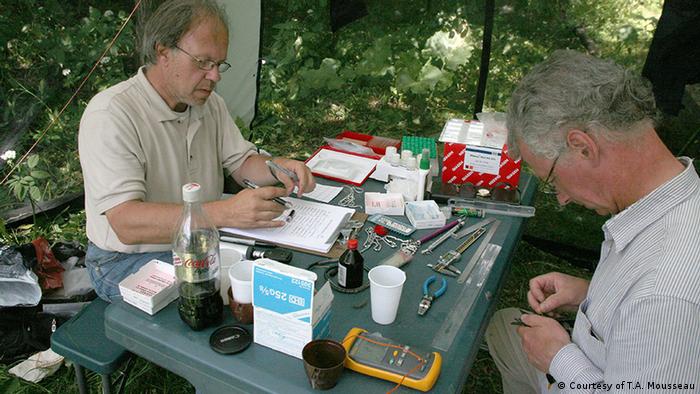 Some mutations might persist for a while if they're adaptive during the hot phase. For example, there's selection for animals whose cells produce a higher antioxidant load, which makes them more resistant to the effects of ionizing radiation. But that protection comes at a metabolic cost. After radiation levels die down, those variants will be selected back out of the population.

Where things get complicated is when the harmful mutations are recessive, that is, when it takes two copies [one for each chromosome] for the expression of the mutation. Many mutations fall into this category. They can accumulate in populations because they're not expressed until two copies come into the same individual [one from the mother, the other from the father].

How can radioactive contamination interact with other problems that affect ecosystems, like habitat loss or climate change?

Certainly climate change is an additional stressor that is likely to interact with radiation to affect populations. We have demonstrated that while swallows in most places have moved their breeding dates forward in response to warming, in the Chernobyl area they are actually delayed. We hypothesize that this is due to the stress from the radioactive contaminants. 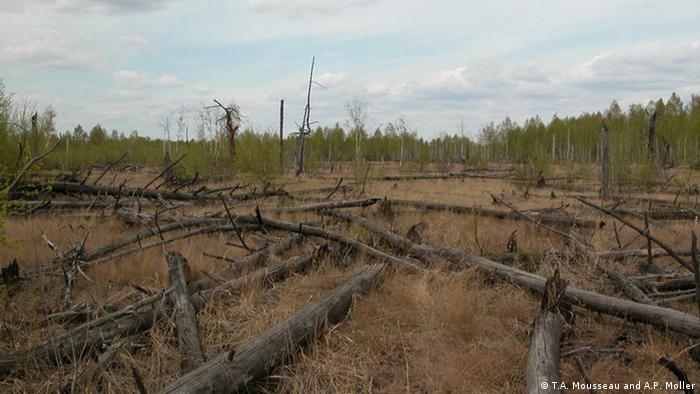 The Red Forest near Chernobyl in Ukraine presents a high risk of fire, as a lack of bacteria prevents the trees from decaying

The biggest fear at present is related to the observation of hotter and drier summers in Ukraine, and the resulting increase in number and size of forest fires. In summer 2015 there were three large fires, and one of them burned through some very contaminated areas.

We have predicted that such events could pose a significant threat to both human populations and the environment via re-suspension and deposition of radionuclides in the leaf litter and plant biomass.

In addition to the threat of catastrophic wildfire spreading nuclear contamination, birds and mammals also move around. Do they absorb radioactive elements in their food and water in contaminated sites, carry them elsewhere, thus dispersing the contamination more widely?

Do animals move radionuclides? Yes! I did a study years ago that showed very significant amounts of radionuclides are exported every year by birds. But it seems unlikely that the amount is enough to cause measurable health effects — unless you're eating the birds. It is known that some people living outside the Chernobyl Exclusion Zone are getting very significant doses from hunting the contaminated wild boar that leave the zone. 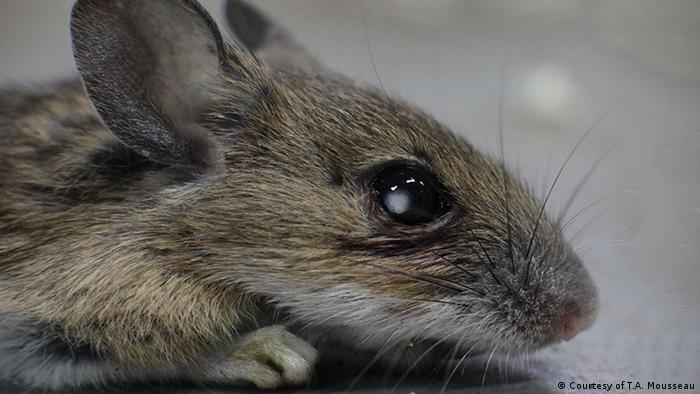 Mouse with cataract collected near Chernobyl - the more radioactive the site, the higher the frequency of defects

How long will the contaminated zones around Chernobyl and Fukushima be mutagenic and dangerous?

Chernobyl was a nuclear fire and ongoing fission event for 10 days, with strontium, uranium and plutonium isotopes strewn into the landscape. They have long half-lives, so many areas will remain hazardous for centuries, even thousands of years.

Fukushima was largely a cesium event, and cesium radionucleotides have a relatively short half-life. The area will mostly naturally decontaminate itself within decades, at most within a couple hundred years.

Timothy Mousseau is a professor of biological sciences at the University of South Carolina in Columbia, South Carolina. He is one of the world's leading experts on the effects of radionucleotide contamination from nuclear accidents on wild bird, insect, rodent, and plant populations.

Japan Prime Minister Shinzo Abe has led a somber ceremony in Tokyo to mark the seventh anniversary of the tsunami disaster. The tragedy killed some 18,500 people and triggered the worst nuclear disaster since Chernobyl. (11.03.2018)

The Ukrainian government has opened a hostel within the Chernobyl contamination zone, giving holidaymakers the chance to explore the epicentre of history's most devastating nuclear accident. (07.06.2017)