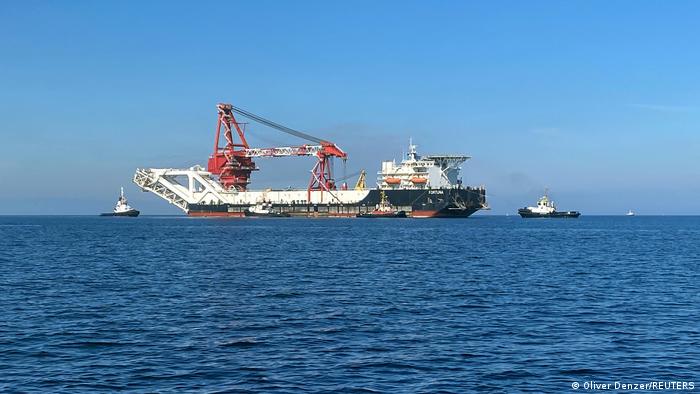 The US informed German officials Monday of its plans to impose sanctions on the Russian pipe-laying vessel "Fortuna" over its involvement in the construction of the Russian-led Nord Stream 2 gas pipeline from Russia to Germany.

"We're taking note of the announcement with regret," a spokesperson for Germany’s Economy Ministry said in Berlin.

The confirmation came after German business publication Handelsblatt reported that the US would be issuing sanctions under its Countering America's Adversaries Through Sanctions Act (CAATSA).

What is the current situation with Nord Stream 2?

The Baltic Sea pipeline is reported to be more than 90% complete.

Construction was suspended in late 2019 after the US imposed sanctions. Russia resumed work on the pipeline in December 2020.

Both Germany and the European Union have criticized US penalties. They say Washington is using the CAATSA sanctions regime to interfere in their foreign and energy policies.

The US claims the pipeline would threaten the EU's security by increasing the bloc's dependence on Russia.

"Although we do not comment on future sanctions measures, we will continue to exchange ideas with allies and partners on potential sanctions issues," a spokesperson for the US embassy in Berlin had told the publication.

He added that the US hoped that Germanywould reconsider its position on Nord Stream 2.

The sanctions come a day before President-elect Joe Biden’s inauguration. While he has opposed the project in the past, it remains unclear whether he would follow President Donald Trump’s hard line on the issue.