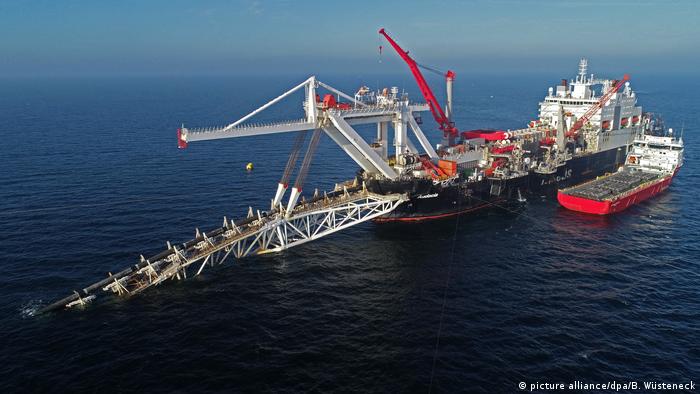 Three US senators are threatening the operators of a small German port with "crushing legal and economic sanctions" for provisioning Russian vessels assisting with constructing the Nord Stream 2 natural gas pipeline.

The US strongly opposes the pipeline, which is owned by Russian gas company Gazprom and will carry natural gas from Russia to Germany.

On Friday, German Minister of State Niels Annen said Germany "firmly rejected" the proposed sanctions, adding the tone and content of the letter were "completely outrageous."

"Threatening a close friend and ally with sanctions, and using that kind of language, will not work," Annen told German public broadcaster ZDF.

"European energy policy will be decided in Brussels, and not in Washington DC," he said.

Murkan Port, located in the small seaside town Sassnitz on Baltic Sea island of Rugen, now finds itself at the center of a geopolitical showdown between Russia and the US.

Along with storing sections of pipe, the port serves as a logistic and service center for ships constructing the German end of the pipeline.

These include the Russian-flagged vessels "Fortuna" and "Akademik Cherskiy," which have yet to begin their work, but will become sanctionable, " the instant that either vessel dips a pipe into the water to construct the Nord Stream 2 pipeline," according to the letter.

The US argues that the pipeline will increase Europe's dependence on Russia, which both Berlin and Moscow dispute. The US proposes selling European's American natural gas shipped across the Atlantic as an alternative.

The senators said the letter served as "formal legal notice," and demanded that Faehrhafen Sassnitz, which is owned by the town of Sassnitz and the state of Mecklenburg Western Pomerania, "cease activities" supporting the construction of the pipeline, or face "potentially fatal measures" that will cut the port's commercial and financial ties with the US.

Switzerland-based pipeline manufacturer Allseas ceased its work on the pipeline after the act was passed, delaying construction off the German coastline.

However, the Nord Stream 2 is nearly finished. Only around 160 kilometers remains out of the planned 1,220-kilometer-long twin pipeline.

The majority of this is in Danish territorial waters, and a small part in German waters.  The pipe is planned to reach German soil at Lubmin, nearly 40 kilometers by sea from Sassnitz.

Can Nord Stream 2 pipeline still be completed despite US sanctions?

The US administration appears resolved to prevent the completion of Russia's Nord Stream 2 gas pipeline across the Baltic Sea, sanctioning every party involved in the project. Sabine Kinkartz reports from Berlin.

US troop withdrawal a cause for NATO concern, German defense minister says

Annegret Kramp-Karrenbauer has told DW that the US threat to remove troops from Germany will not damage ties between the two countries, but it is cause for concern for the NATO alliance as a whole.

Both Nord Stream natural gas pipelines from Russia to Germany have developed apparent leaks within hours of one another. The cause is unknown, but some sources have hinted at sabotage.