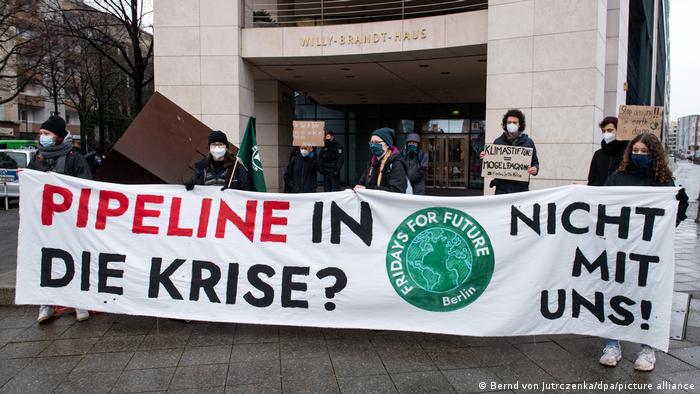 'A pipeline to a crisis — not with us!': Environmentalists are against Nord Stream 2

Short of armed intervention, sanctions are one of the United States' most aggressive weapons against what it sees as bad behavior and for advancing its interests abroad. In Germany, nonprofit organizations are a common way to advance projects without the tax or regulatory requirements of private corporations.

The two countries' finance-political tools are coming head-to-head in the northern German state of Mecklenburg-Western Pomerania, where a high-stakes showdown is simmering over global energy and climate security.

Since 2019, the threat of US sanctions has left the Nord Stream 2 gas pipeline about 94% complete. If finished, the 1,230-kilometer (764-mile) pipeline will terminate in Lubmin, a coastal village in Mecklenburg-Western Pomerania, and more than double Germany's imports of Russian natural gas.

The Nord Stream 2 pipeline bypasses the Baltic states and Poland

Sanctions would target private companies involved in the project. Earlier this month, the state government of Mecklenburg-Western Pomerania established a public foundation that could take over potentially sanctionable activity because the foundation "does not have to fear sanctions," a spokesperson for the state's Energy Ministry told DW.

"The foundation could offer the possibility of acquiring necessary parts and machinery for pipeline construction and, as necessary, make them available to the participating companies," the spokesperson, Renate Gundlach, said in a statement. "The goal is to secure these highly specialized items, which only a few companies in the world produce before they would be potentially no longer available to acquire because of sanctions."

It is unclear if such a plan could avoid sanctions, which have bipartisan support in Washington. President-elect Joe Biden has also expressed his opposition to Nord Stream 2. A new round of sanctions could extend to public institutions, although that "would be a game changer," German MP Claudia Müller, whose constituency is from Mecklenburg-Western Pomerania, told German newspaper Die Welt.

About €250,000 ($303,000) for the foundation, named the Climate and Environmental Protection MV, comes from state coffers. The Nord Stream 2 building company has pledged an initial €20 million ($24 million). That gives the company's owner, Russia's partially state-run energy conglomerate, Gazprom, some say over the foundation's activities and leadership.

The financing and organizational structure give critics — who span the United States, the European Union, and some German officials — more reason to oppose a project they have long warned gives Russia dangerous influence over Germany and Europe.

"There are numerous reasons to be skeptical of this foundation as reported, particularly because of a lack of transparency and the fact it is almost wholly Russian-funded. This Russian funding is further proof that Nord Stream 2 is not just another commercial deal. Calling it an environmental protection measure also flies in the face of the numerous German and other environmental organizations opposed to Nord Stream 2," a US Embassy spokesperson in Berlin told DW.

The US has expressed interest in selling its own natural gas to the EU.

Proponents say the project is essential for Germany and the EU. A report from April 2020, commissioned by Nord Stream 2 and provided to DW by the Mecklenburg-Western Pomerania Energy Ministry, shows it would provide only a small bump in gas imports EU-wide between now and 2040. Additional sources would be necessary to cover the shortfall.

Deutsche Umwelthilfe, a German environmental group, has accused the state government of "abusing foundation law" and is preparing a lawsuit against it. In a joint statement on Thursday, some of Germany's largest environmental organizations rejected any cooperation with what they called a "sham."

Mecklenburg-Western Pomerania's Energy Ministry declined to respond to the accusations.

The foundation's charter does lay out general support for tackling climate change and protecting the environment. It also specifically aims to hasten pipeline completion: "The state of Mecklenburg-Western Pomerania stands by the pipeline. Gas is the most climate-friendly transition technology to guarantee the necessary energy supply. A secure supply of gas is in the interest of the people of Germany, Europe, and Mecklenburg-Western Pomerania."

Natural gas: Climate-friendly or not?

Those claims are disputed. Natural gas emits less carbon dioxide and is more efficient when burned than coal or oil, but energy experts say that overlooks the climate and environmental impacts of exploring, developing, and extracting natural gas at their sources, and then transporting it. Leaks and losses along the way may emit far more methane, another greenhouse gas, than previously thought.

Proponents of Nord Stream 2, and natural gas more broadly, consider the fossil fuel a "bridge technology" to a carbon-neutral energy mix. That is especially the case in Germany, where a movement against nuclear power following the 2011 Fukushima disaster succeeded in accelerating the phase-out of Germany's nuclear power plants. The country's transition to renewable power sources (the "Energiewende") took hold around the same time, but they still do not meet demand.

Environmental groups and many energy analysts consider natural gas a crutch, not a bridge.

"Instead of fake environmental foundations that damage the climate, Mecklenburg-Western Pomerania should focus its current policy on a dedicated expansion of renewable energy," Claudia Kemfert, a leading climate policy researcher at the German Institute for Economic Research, said in a tweet. "The fossil fuel of natural gas is a bridge to nowhere. We need future technologies, not bridge technologies."

Work on the pipeline that runs from Russia to Germany via the Baltic Sea was suspended last year after sanctions from the United States. Construction of the project is reported to be more than 90% complete