Germany's foreign minister said there are several reasons why isolating Russia might not be a good idea, speaking after meeting with his Polish counterpart. The two discussed the Nord Stream 2 gas pipeline at length. 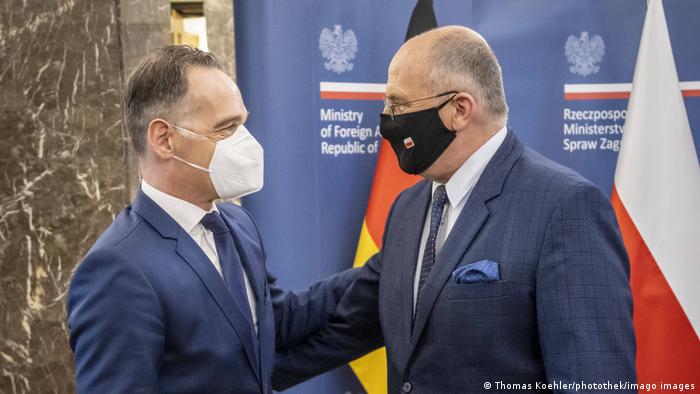 German Foreign Minister Heiko Maas warned against breaking off economic relations with Russia during his visit to Poland on Thursday, amid a dispute about the Nord Stream 2 gas pipeline.

"Fundamentally, I'm of the opinion that it would put us in Europe in a difficult position if economic relations with Russia were no longer possible," Maas said.

He cautioned it could drive Russia and China closer together.

"It is not only wrong but also dangerous for our security interests in Europe," Maas added.

Maas was meeting with his Polish counterpart Zbigniew Rau on Thursday in the Polish capital, Warsaw.

He thanked Rau for the meeting in a tweet, adding that, "we need this unity for Europe."

Its supporters include German Chancellor Angela Merkel who argues that the pipeline will help meet Germany's energy needs.

Other countries, including Poland and other Central European countries as well as the US have expressed opposition to the Nord Stream 2 pipeline.

Poland has also said that the pipeline was a political as well as an economic project designed to increase Russian influence in Europe.

Other Central European countries are also concerned about loss of revenue from gas transit fees.

"We are against it," Rau said on Thursday. The project is a security risk for Europe and should not be completed, he added.

Rau and Maas were unified in their condemnation of the regime in Belarus and its departure from the EU's Eastern partnership policy initiative.

Within EU countries, Poland had played a leading role in calling for sanctions against Belarus' leadership, Maas said, adding he was thankful.

"We should not let Belarus out of our sights," Rau said. Poland is determined to continue its efforts for the benefit of Belarussian civil society "and to free the political prisoners," he said.

Maas is set to later meet members of Belarus' opposition in exile in Warsaw later on Thursday.

In other areas, the countries appeared less united. Rau defended the highly controversial LGBTQ+ law recently passed in Hungary that would prohibit content being shown to under-18s on homosexuality or gender transition. This issue was the responsibility of the nation state, Rau said.

Rau once again raised the topic of reparations from Germany for the damage it caused to the country during World War II.

There is no doubt that Germany is responsible for the catastrophe of the war and the huge loss of human life and possessions, Rau said.

"The manner and the procedure for reparations, however, remains an open question," Rau added.

Nord Stream 2: US to waive sanctions against leading company

The US government has reportedly decided not to sanction the German company behind the gas pipeline. Germany's foreign minister called the move a "constructive step."