Nord Stream 2: US to waive sanctions against leading company

The US government has reportedly decided not to sanction the German company behind the gas pipeline. Germany's foreign minister called the move a "constructive step." 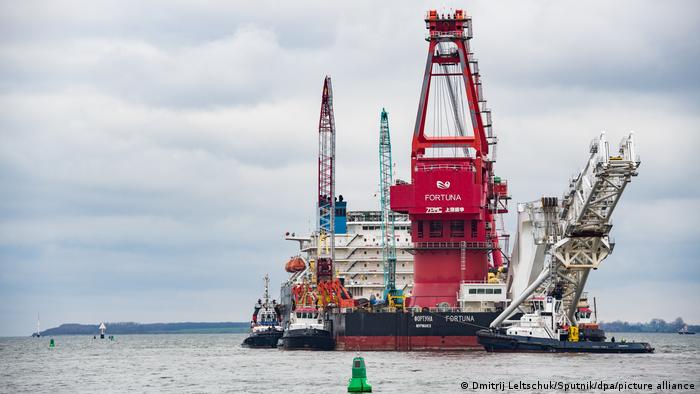 United States President Joe Biden will waive sanctions against certain major parties involved in the construction of the Nord Stream 2 gas pipeline from Russia to Germany, US media reported Tuesday.

The State Department will inform Congress of the entities that deserve sanctions for their involvement, but it will waive sanctions against two key players so as not to compromise US relations with Germany, according to sources cited by news website Axios.

The Biden administration, which has previously expressed its intention to prevent the pipeline's completion, is instead expected to impose sanctions on several Russian ships involved in construction.

The Biden administration has found itself in a tricky situation with Germany. With the project almost complete, officials have concluded that the only way to end it would be with sanctions against intended German end-users, Axios said.

Biden, however, does not want to sour relations with Germany over the pipeline, the news site added

On Wednesday, German Foreign Minister Heiko Maas told reporters in Berlin that Germany sees the move as a "constructive step," which "takes into consideration the extraordinarily good relations that have been established with the Biden administration."

Maas also said that the Biden administration had not made any promises beyond the sanctions waiver.

US Secretary of State Antony Blinken said he spoke with Maas on Tuesday about Washington's opposition to the pipeline.

"Secretary Blinken underscored the US commitment to work with allies and partners to counter Russian efforts to undermine our collective security, and in that vein, emphasized US opposition to the Nord Stream 2 pipeline," State Department spokesperson Ned Price said.
.

Why is Russia building the Nord Stream 2 pipeline?

The finalization of the project will be seen as a victory for Putin who has been seeking an alternative route for Russian gas into Europe, which is currently passing through Ukraine.

Russian gas flows bring in billions in taxes for Ukraine, and Moscow has been attempting to isolate the country as it moves away from the Russian sphere of influence.

The Kremlin has also resorted to open aggression, annexing the Ukrainian region of Crimea and supporting militant separatists in the east of the country.

The pipeline is a source of controversy in the European Union. The German government has rejected calls to end it, despite serious tensions with Moscow over the fate of opposition activist Alexei Navalny.

Alongside the Russian company Gazprom, German companies Uniper and Wintershall, French firm Engie, and the British-Dutch fossil fuel giant Shell, as well as Austrian financial backers, all have a stake in the project.