Trump administration changes to the Helms-Burton Act have come into force, allowing for lawsuits against foreign firms in Cuba. The move has set the White House on a collision course with European allies. 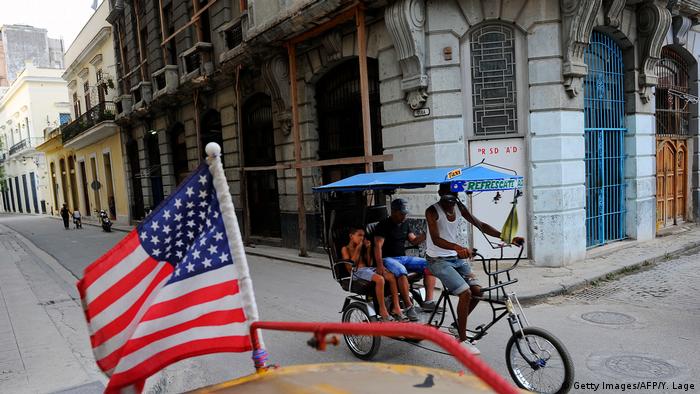 The Trump administration will allow US nationals to file lawsuits against foreign companies operating on properties that were seized from Americans during the 1959 Cuban Revolution.

The major policy shift, first announced in April but implemented on Thursday, sets the stage for fresh economic disputes between the US and Europe. It also marks a new escalation in Washington's policy to hammer Havana over its support for Venezuela's socialist President Nicolas Maduro.

The US decision to end a two-decade waiver to part of the 1996 Helms-Burton Act could expose US, European and Canadian companies to billions of dollars in legal claims and undermine Cuba's attempts to attract more foreign investment at a time of economic crisis triggered in part by steep cuts in subsidized Venezuelan oil.

Title III of the Act gave Americans who fled Cuba the right to take legal action in US courts against mostly European companies operating out of properties Cuba nationalized following the island's 1959 revolution.

In addition, the administration will begin to enforce Title IV of the Act, which requires the denial of US visas to those who "confiscate or 'traffic' in confiscated property in Cuba claimed by US nationals."

Every US president since Bill Clinton has issued waivers to the Act out of concern it would spark trade disputes with allies and a mountain of lawsuits in US courts that would prevent any future settlement with Cuba over nationalized properties.

Cuba has said it would reimburse the owners of nationalized properties, but only if it were reimbursed for billions of dollars in damages caused by a six-decade US trade embargo.

The European Union, which is Cuba's largest trading partner, has warned it would take "appropriate measures" if the US tries to interfere in business ties between sovereign states.

"The European Union reiterates its strong opposition to the extraterritorial application of unilateral restrictive measures which it considers contrary to international law," a spokesperson for the EU told DW.

"The EU is ready to protect European interests — including European investments and the economic activities of EU individuals and entities in their relations with Cuba, if these were to be affected."

The Trump administration has angered European allies in the past over its withdrawal from the Paris climate accords and the 2015 Iran nuclear deal. There are also trade disputes brewing between Washington and Brussels.

Europe has backed the United States in applying pressure on Venezuelan President Nicolas Maduro, but opening a trade dispute and hitting Cuba's fragile economy could lead to losing support from key allies such as Spain.

William LeoGrande, a professor at American University in Washington, DC, who specializes in Latin America, said hard-line interventionists in the Trump administration have adopted a policy of regime change towards Venezuela and Cuba.

"They hope that by toppling the Venezuelan government and cutting off oil exports to Cuba, they can bring about an economic crisis in Cuba that causes political collapse there as well," he told DW.

The Trump administration's policy is designed "to scare away foreign contractors and investors, leaving Cuba short of the capital it needs to grow its economy, and aggravating the economic crisis," LeoGrande said.

Europe had lobbied Washington not to end waivers to the Act exposing foreign firms to lawsuits.

"Now the concerns of the EU are going to be ignored, despite the EU's efforts to be helpful solving the crisis in Venezuela," LeoGrande said. "It is yet another example of the Trump administration's unilateralism and contempt for traditional allies."

US-Cuba relations have plummeted under Trump following a historic rapprochement under the Obama administration, when the two countries reestablished diplomatic relations.

The US increased pressure on Venezuela's oil industry with more sanctions on its shipping companies. Meanwhile, the pursuit of Venezuela's former spy chief took a turn in Spain. (13.04.2019)

In a censure of the United States, the UN General Assembly approved a resolution calling for an end to the blockade against Cuba. Cuba’s foreign minister called the embargo "a massive violation of human rights." (02.11.2018)

Cuba's economy is stagnating. The country is looking for foreign investments, and these might come from Russia rather than from the United States. Andreas Knobloch reports on a trade fair in Havana. (29.10.2018)

The effects of the sanctions on Russia's banking system will likely affect Venezuela, Nicaragua and Cuba. Energy, military and agricultural sectors could suffer the most.