The US has upped its efforts to push out President Nicolas Maduro with further sanctions on the Venezuelan oil industry. It comes after opposition leader Juan Guaido was stripped of parliamentary immunity. 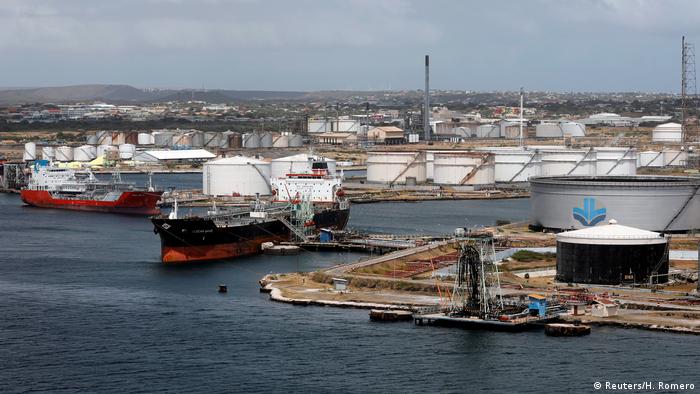 US Vice President Mark Pence on Friday said the US had placed sanctions on 34 vessels belonging to Venezuela's state oil company and two companies that ship crude oil to Cuba, as Washington steps up its efforts against President Nicolas Maduro.

The sanctions are the most recent move by the US as it seeks to squeeze revenue from the cash-strapped leftist government amid a deepening political crisis in the country.

Despite more than 50 countries including the US, Britain, Canada, Germany and other EU nations having recognized opposition leader Juan Guaido as the interim president of Venezuela, Maduro has held onto power and enjoys backing from China and Russia.

"Venezuela's oil belongs to the Venezuelan people," Pence said in a speech at Rice University in Houston.

"Those looking on should know this: All options are on the table. And Nicolas Maduro would do well not to test the resolve of the United States of America," he said.

All transactions with listed ships banned

The Treasury Department said it was categorizing 34 vessels of state oil company PDVSA as blocked property, meaning that US citizens or entities are blocked from any financial transactions involving them.

The US also targeted a tanker that transports crude oil from Venezuela to its key ally Cuba, the Despina Andrianna, as well as two shipping companies linked to the vessel — one based in Greece and another in Liberia.

The US imposed sanctions on Venezuela's oil industry in January to cut off the government's most vital source of revenue.

US Treasury Secretary Steven Mnuchin in a statement accused Cuba of propping up Maduro.

"The United States remains committed to a transition to democracy in Venezuela and to holding the Cuban regime accountable for its direct involvement in Venezuela's demise," Mnuchin said in a statement.

The EU warned that an attempt to prosecute the opposition leader would lead to an "escalation of tensions" in Venezuela. Earlier this week, a body tied to President Nicolas Maduro paved the way for Guaido to be arrested. (04.04.2019)