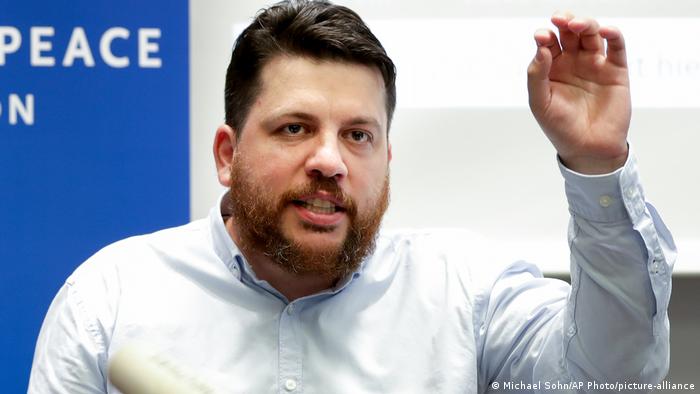 Untargeted sanctions against Russia from the West over the poisoning of Russian opposition figure Alexei Navalny would be, paradoxically, an "enormous opportunity" for Moscow, a top aide to the politician said Tuesday.

"Any time a huge round of sectoral sanctions is adopted somewhere in Europe, they open a big box of champagne in the Kremlin," Leonid Volkov told DW's Konstantin Eggertin in an interview in Berlin.

Germany is considering broad sanctions against Russia in response to the near-fatal poisoning of Kremlin critic Navalny last month. His aides have accused the Russian government of ordering his poisoning, an accusation Moscow has denied.

"[Russian leadership is] very happy because every round of wide sanctions gives enormous opportunity for the Kremlin propaganda to support its narrative, like: 'the whole West is against us,” Volkov said.

The West should instead consider sanctions against individuals that would target Russian President Vladimir Putin's lieutenants and inner circle, Volkov said.

"I know there is already a debate [about the gas project] in Germany ... on the fate of Nord Stream 2,” Volkov said.

"When they try to connect it with the use of chemical weapons, it sounds like — for Putin and his propaganda, also — it sounds like they are being opportunistic.”

Navalny has been recovering in Berlin and said he intends to return to Russia.

Volkov, who has worked alongside Navalny for years, said he hopes the poisoning will change the way Germany interacts with Russia.

The "bridge-building strategy” Germany has employed for years with Russia is something Putin always considered a weakness, he said.

"When people try to approach [Putin] and try to discuss something ... he was always thinking of his counterparts as hypocrites," Volkov said. "Talking liberal values, talking freedoms, but actually they need [him]."

"'Whatever I do, they will always again approach me because they are hypocrites and cowards,'" Volkov said, attributing the thought to the Russian president.

"That is the only outcome of all the attempts to build bridges with Putin."