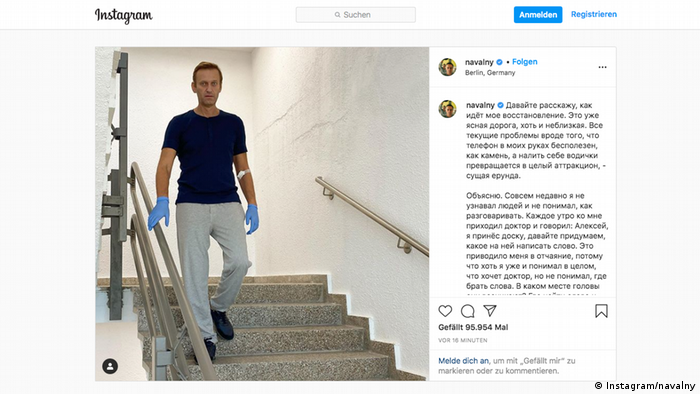 Russian opposition politician and Kremlin critic Alexei Navalny was seen walking down the stairs at a Berlin' Charite hospital Saturday, in a sign that he is continuing to recover after being poisoned by a nerve agent last month.

"Let me tell how my recovery is going. It is already a clear path although a long one," Navalny wrote in a caption of the photo shared on his Instagram feed.

He said climbing stairs was difficult because his legs tremble. Pouring water and using the phone also remain a challenge. Navalny was removed from a ventilator five days ago.

"There are many problems yet to be solved but amazing doctors from the Charite hospital have solved the main one," the post said.

"They turned me from a 'technically alive human being' into someone who has high chances to become … a man who can quickly scroll Instagram."

Navalny, the foremost political opponent of Russian President Vladimir Putin, was airlifted to the German capital on August 20 after he fell ill in Siberia.

Earlier this week, the German government said labs in France and Sweden both confirmed that Navalny had been poisoned with the Soviet-era nerve agent Novichok.

On Thursday, Navalny's aides said they had found traces of Novichok on Navalny's water bottle at Xander Hotel in Tomsk, Siberia.

They removed the bottle and other items and brought them to Germany as potential evidence, saying they didn't trust Moscow to conduct a proper investigation.

On Friday, the Kremlin accused Navalny's aides of hampering the official inquiry into the case by removing evidence.

"What could have been evidence of poisoning was unfortunately removed," said Putin's spokesman, Dmitry Peskov.

Germany and other Western governments are demanding an explanation from Russia on how Navalny was poisoned. The Kremlin has denied having any involvement in wrongdoing.