'Hi, this is Navalny': Poisoned Kremlin critic posts his own update on condition

Russian opposition politician Alexei Navalny posted a photo online that showed him sitting up in bed with his family and breathing by himself. He has been receiving treatment in Germany after a suspected poisoning.

Alexei Navalny on Tuesday shared a picture on Instagram showing him sitting up in his hospital bed and smiling. He was surrounded by his wife and two children.

"Hi, this is Navalny," he wrote. "I miss you. Still I can do almost nothing, but yesterday I was able to breathe on my own for the whole day."

Navalny has been receiving treatment in Germany since transferring from a Russian hospital after he collapsed in Siberia last month.

Aides accuse the Russian government of ordering his poisoning, something that Moscow denies.

His spokesman, Kira Yarmysh, said that he would return to Russia once his treatment is complete.

"I'll confirm again to everyone, no other options were ever considered," she wrote on Twitter.

On Monday, doctors at the Charite hospital said that Navalny was off ventilation and able to leave his bed for short periods. The Berlin clinic treating Navalny posted the update on its Twitter account.

Read more:  Germany is mulling economic sanctions against Russia. Do they actually work?

Swedish and French tests have reached the same conclusion as a German investigation, which found that Navalny was poisoned with the nerve agent known as Novichok.

Kremlin spokesman Dmitry Peskov once again dismissed any involvement but called on Germany to let Russian officials carry out their own investigation. He questioned why Sweden and France had been able to test Navalny's medical samples and accused Berlin of refusing to prove the same access. Germany has responded to past Russian calls for samples by saying that Russia should already have all it needs after its initial treatment of the dissident.

Germany said two weeks ago there was "unequivocal evidence" that he was poisoned with Novichok but Russia has dismissed the findings, saying its doctors found no such proof. 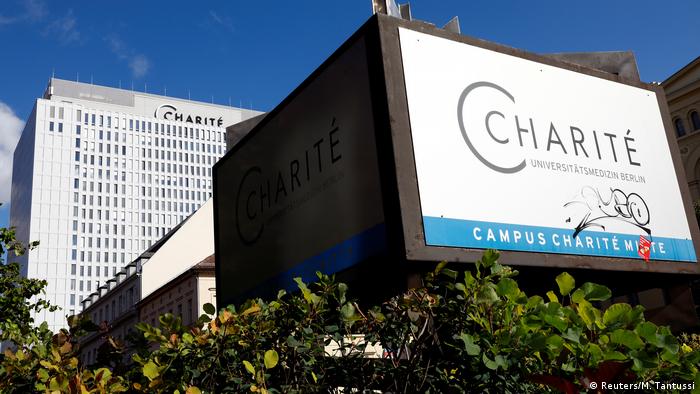 The Charite hospital found indications Navlany had been poisoned, further tests at a German military laboratory identified the purported nerve agent as Novichok, as used in Salisbury in the UK on Sergei Skripal and his wife

Read more:  Russia: Opposition in Novosibirsk joins forces to take on the Kremlin

The case had drawn widespread international condemnation from western countries, who have called for an independent investigation.

Macron said in a statement it was "imperative that all light be shed, without delay, on the circumstances and responsibilities of this attempted assassination."

Russia says "disinformation" and "hysteria" are being used to justify possible further sanctions against Moscow.