German Minister of State on Navalny poisoning: ′Breach of international law′ | World| Breaking news and perspectives from around the globe | DW | 16.09.2020

Talking to DW's Conflict Zone, Niels Annen said he is "very, very disappointed" about Russia's reaction and stressed sanctions are on the table.

German Minister of State Niels Annen strongly criticized the Russian government for its reaction following the suspected poisoning of Russian opposition leader Alexei Navalny, who is currently hospitalized in Berlin.

"Instead of making clear what happened and to cooperate in an investigation, we are seeing the old scheme of misleading information, of counter accusations," he said.

Annen, who is also a member of Parliament for the Social Democrats, stressed it was "quite obvious" that the poisoning was a "breach of international law," adding that the case has an "international dimension."

The German government has indicated it has "unequivocal proof" that Navalny was poisoned with a chemical nerve agent from the Novichok group.

It has also stressed specialist laboratories in Sweden and France have corroborated these findings.

Berlin has demanded answers from the Russian government, which denies any wrongdoing. 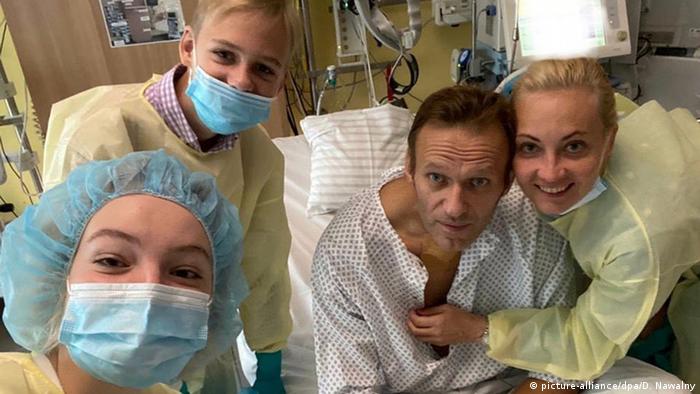 Alexei Navalny posted a photo online that showed him sitting up in bed with his family and breathing by himself.

'You need to be very clear'

The Navalny case has badly affected relations between Germany and Russia, which could be further disturbed if sanctions are imposed against Moscow.

Annen emphasized that "the Russian side needs to know that clear sanctions are on the table," although he added that he still hopes they can be prevented.

However, he stressed to Conflict Zone host Sarah Kelly that "this is entirely the Russian government's decision."

Annen also said he is "not convinced" about stopping the nearly completed gas pipeline Nord Stream 2 between Germany and Russia, a possibility which is being heavily debated in Germany.

Navalny’s poisoning has put increasing pressure on the German government to end the project, which is set to bring gas from Russia to Germany.

"It's too simple just to say closing Nord Stream 2 will solve the problem," said Annen. "I don't buy it."

Despite these tensions, the minister of state said channels of communication with Moscow should remain open in order to address international conflicts in countries like Libya or Syria.

"You cannot cut off the dialogue with Russia, but you need to be very clear, and that's what we are," he concluded.

Navalny, Novichok and Nord Stream 2 — Germany stuck between a rock and a pipeline

Condemnation of Russia was swift following confirmation that Alexei Navalny had been the victim of a nerve agent attack. But strong words are easier than action, and Germany is debating how tough its reaction should be.