The new humanitarian truce follows four weeks of conflict over the disputed region. Two previous Russia-brokered agreements have broken down, with both Armenia and Azerbaijan blaming the other for a return to violence. 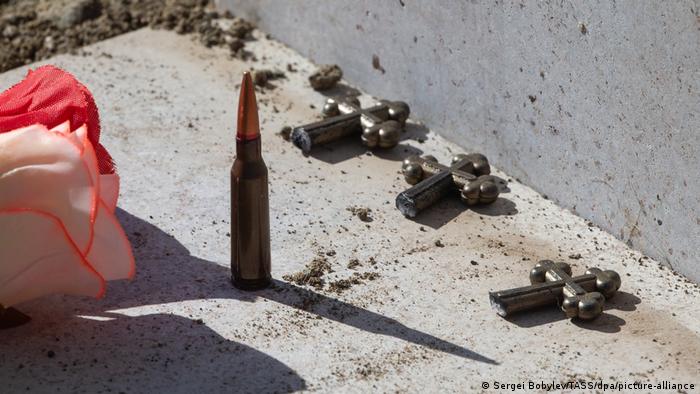 The United States, Armenia and Azerbaijan announced a new cease-fire agreement over the disputed Nagorno-Karabakh region that will take effect at 8:00 a.m. local time (0400 UTC/GMT) on Monday.

The deal follows nearly a month of fresh conflict in the region, internationally recognized as part of Azerbaijan but run by ethnic Armenians, entered its fifth week. Two previous temporary truces, broken by Russia, have failed to hold.

Shortly after the cease-fire took effect on Monday, Armenia and Azerbaijan accused each other of violating the agreement. The Azerbaijan Defense Ministry said Armenian forces had shelled villages in the Terter and Lachin regions. The Nagorno-Karabakh Defense Ministry denied the claim, saying it was "misinformation" and that Azerbaijian's military had launched a missile attack on Armenian forces.

A joint statement from the three countries said the accord came after Armenian Foreign Minister Zohrab Mnatsakanyan and his Azerbaijani counterpart Jeyhun Bayramov met with senior US diplomats on Friday.

"The United States facilitated intensive negotiations among the Foreign Ministers and the Minsk Group Co-Chairs to move Armenia and Azerbaijan closer to a peaceful resolution of the Nagorno-Karabakh conflict," Sunday's joint statement said.

The US is one of three co-chairs, along with France and Russia, of the Minsk Group, established by the Organization for the Security and Cooperation of Europe (OSCE) to broker peace between the two former Soviet republics.

Some 37 civilians have also been killed in fighting between Azeri and Armenian forces, which broke out again on September 27, it added.

Azerbaijan has not disclosed its military casualties due to censorship under the martial law that applies in the region. But Baku did say 65 civilians were killed and more than 300 wounded on their side.

Nagorno-Karabakh is internationally recognized as part of Azerbaijan but is controlled by ethnic Armenian inhabitants. Fighting over the region has surged to its worst level since a war from 1991-1994 that killed some 30,000 people.

Local officials in Karabakh on Sunday had accused Azeri forces of firing artillery at civilian settlements during the night. Baku denied killing civilians and said its positions had been attacked with small arms, mortars, tanks, and howitzers.

Meanwhile, Iran's Revolutionary Guards said Sunday they have deployed troops along the Islamic Republic's border with Armenia and Azerbaijan. Their mission was "to protect national interests and maintain peace and security," according to comments published by the IRNA news agency.

His comments appeared to contradict an interview he gave on Saturday, where Aliyev said he wanted the fighting to stop and for all parties to "move to the negotiating table."

"I am absolutely confident in the effectiveness of the peace negotiations but this also depends on the will of the Armenian side to take part in them," Azerbaijan's president said.

Aliyev has said that Armenian forces need to withdraw from the disputed region to end the conflict.